The above quote from the dying thoughts of a would-be assassin bested by the technique of the titular killer, Ogami Itto (Tomisaburô Wakayama), says something about Shogun Assassin itself. “Directed” by Robert Houston — who stripped down, cobbled together, dubbed, and re-scored footage from the first two films of the epic Lone Wolf and Cub series — Shogun Assassin is so enjoyably larded with violence that it turns the visual poetry of arterial spray and swordplay into absurdism. The film follows Ogami and his toddler son, Daiguro (Akihiro Tomikawa), who flee after the paranoid and senile Shogun has Ogami’s wife murdered, forcing Ogami to kill somewhere in the realm of 350 ninjas (according to Daigoro’s eerily detached narration).

Houston’s editing, which values action over character or drama, keeps us from understanding why Ogami’s wife was killed. It also keeps us from understanding who Ogami is, reducing the character to a mere extension of his formidable blade. There are a few short scenes which reveal Ogami sweetly nurturing Daigoro, although Wakayama plays them with a stoicism that reminds us how his attention is always unshakably fixated on the potential for violence. Shogun Assassin isn’t Lone Wolf and Cub, nor is it meant to be; it’s pop art, an exercise in the suggestive power of music, and a demonstration of the efficacy of exhilarating violence. Had Houston or someone else decided to undertake the project in the year 2018, it would fit nicely on Youtube or Vimeo, perhaps as an alternative to the Grindhouse circuit.

Shogun Assassin is a cinematic oddity — and by hacking up a foreign film series to fit an exploitation model, it’s also a potentially problematic treatment of its source material. But owing to the direction of Kenji Misumi, who helmed the first two installments of Lone Wolf and Cub, the film is often striking and lyrical. Widescreen shots of dramatic action emphasize the beautiful and expansive Japanese landscape, while close-ups fill the screen with Ogami’s face, homing in on the character’s desperate resolve. First and foremost, Houston deserves credit for recognizing that intrinsic power of melodramatic images such as these, as well as their potential to comprise what amounts to an absorbing and titillating opera of violence. 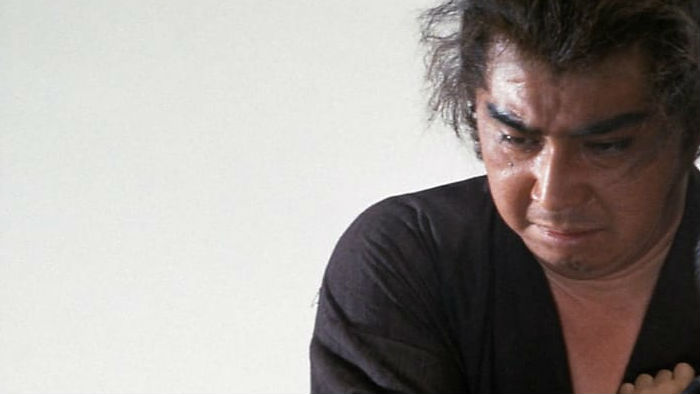 Houston also deserves plaudits for the language dubbing and score of Shogun Assassin, two facets which save the film from devolving into unadulterated exploitation. The dubbing, which is often a surefire way to make a film feel cheap, dispensable, and inadvertently humorous, is cannily executed here. Dialogue is minimal, and often happens when a character’s mouth is obscured or that person is in motion, drawing our eyes from their face and lips. Much of what occurs in Shogun Assassin is coupled with Daigoro’s voiceover narration, which is delivered coldly and more articulately than one would expect from a toddler, creating a sense of unease.

In lieu of traditional exposition and extended dialogue, Houston also employs a truly remarkable, hypnotic synth score from ASF and ASF to emphasize Ogami’s isolation, as well as remark upon the brutal elegance of his skill with a sword. The unmistakably 80’s music — which recalls the Tangerine Dream scores of Friedkin’s Sorceror and Mann’s Thief — freshens the 1972 images on screen and compounds the perception of Ogami, a prolific killer, as a haunted and inhuman entity made animalistic and nearly immortal by tragedy.

Shogun Assassin is currently available for purchase on Amazon, either on DVD ($18) or as a feature on Criterion’s Lone Wolf and Cub set ($50). It’s a breezy, exciting affair that will reward repeat viewings as a form of stylish comfort food, and is an offering from Filmstruck that is worth seeking out in physical form. A Frankenfilm that was already an obscurity once, there is hardly a guarantee that this version of Ogami’s tale will remain easily obtainable.