Sephiroth is Causing Quite the Stir in Super Smash Brothers Ultimate 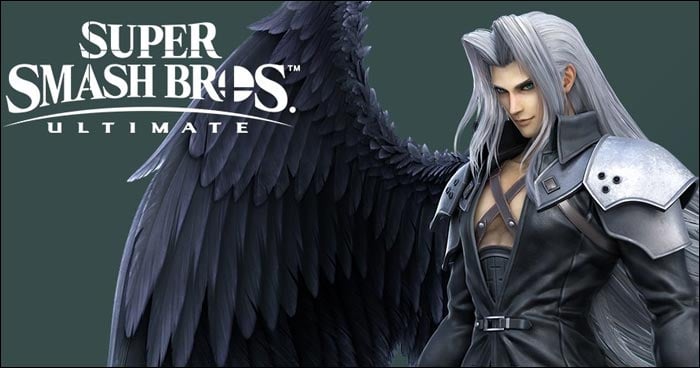 The big bad of the Final Fantasy series- the silver-haired, one-winged menace that is Sephiroth- was officially released for Super Smash Brothers Ultimate today for the Nintendo Switch. However, the character was able to be played as early as December 17th following an in-game event. During this event, the fan content was pretty hectic as is to be expected with a new Super Smash fighter. Let’s take a look at some of the best of Super Smash Sephiroth that the internet has to offer.

Twitter user Aero tweeted out the below photo of Sephiroth’s down smash attack before the character was demonstrated in a presentation. Thankfully, this was not the official title of the move. That would just be too painful. Pretty funny, but too soon. Yes, I know the original Final Fantasy VII came out in 1997. Yes, it is still too soon to make Aerith jokes, you monster.

I apologize in advance… pic.twitter.com/CPt8QEvoYE

Sephiroth holding Jigglypuff’s hand. That’s it. That’s the Tweet. Thank you for this Out of Context Pokémon. This is the image I needed to see today.

Shirtless Sephiroth has also been attracting some attention in the game so of course, someone made a Spongebob crossover. I laughed so hard at this one. If you’re a fan of quality memes, this is the one for you. Squidward is basically all of us. Thanks for this one Ultra.

With a new character comes a new Kirby transformation and the entire world has to agree that Kirby is looking stylish as hell with Sephiroth’s long and luscious locks. Even the official Twitter account for the Final Fantasy VII Remake retweeted this picture set of Kirby showing off his Sephiroth look with the caption “Because Kirby’s worth it”. Unfortunately, it would seem that Kirby also inherits Sephiroth’s murderous tendencies. What an adorably cute murder machine though, right?

Because Kirby’s worth it. https://t.co/6SHn2DV4iD

You can’t mention Sephiroth’s inclusion in Super Smash without discussing his absolutely flawless unique victory screen. BLM Ultima posted one of Sephiroth’s victory screens in which he gets a very fiery background as he nonchalantly walks into the flames and a short yet epic version of his musical theme “One Winged Angel” plays in the background. It’s so bad ass. In fact, it reminds me of a game over screen when you get absolutely wrecked on by the villain in a video game.  It’s also cool that he got a unique one in a similar way that Joker from Persona 5 did.

HE DID IT, THE MADMAN. SINGLE GREATEST VICTORY SCREEN OF ALL TIME https://t.co/IngftJkRGJ pic.twitter.com/c2PcwdkRYF

Last but not least, a little reminder of how insane video games are in this day and age from Twitter user Nibel. Can you imagine being told as a kid that there would be a fighting game where you could play as Sonic the Hedgehog, Mario, Banjo Kazooie, Pikachu and Sephiroth? It’s a bit crazy when you think about it. But that’s why we love games I suppose.

Sephiroth is available in Super Smash Brothers Ultimate now for the Nintendo Switch.

The Overwatch Voice Actors Take on Among Us

The Best Episode One Twists in Anime