With the mess of “My Last Day” behind Scrubs, “My Nightingale” breathes fresh air into the young comedy; it’s a complete 180 from the awkward machinations of “My Overkill” in every sense of the word. Admittedly, some of this comes from simple things, like the introduction (or reappearance) of the show’s most memorable running gags – but mostly, “My Nightingale” shines because of a renewed focus on its main characters, utilizing an intriguing premise to deliver a surprisingly poignant, emotional story, and setting the tone for much of season two of Scrubs to follow. 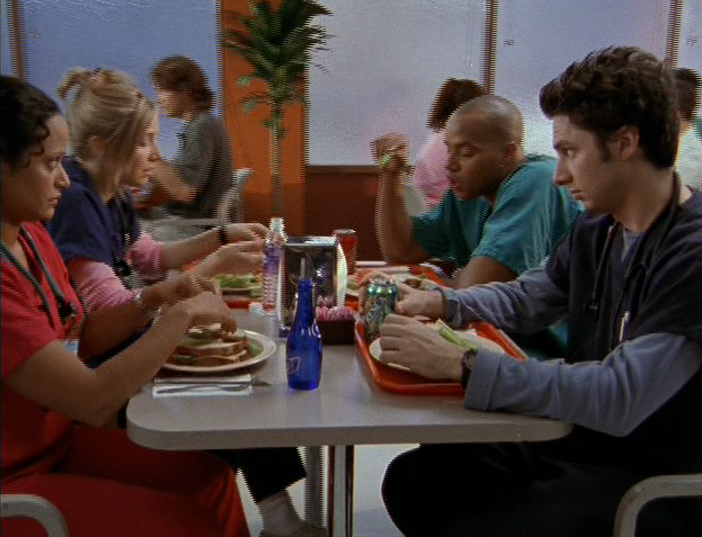 It does so by playing directly to its strengths, right down to how the story is constructed; often, the best Scrubs episodes are the ones unifying all of its characters in one scenario, utilizing smaller moments and cutaways to examine the unique wrinkles that fit the journey of each character. “My Nightingale” takes that tried-and-true formula, and takes it a step further: right down to an internal level, J.D., Elliot, Cox, Carla, and Turk are all placed on a single thematic plane – from the word go, this is a story about the slow maturation of its central trio of residents, observing the emotional states of Cox and Carla (who’ve already gone through these moments) as the young doctors make it through their first night alone in the hospital (while a cop and criminal caught in a car accident together lay in ICU, nonetheless).

“My Nightingale” shines because of a renewed focus on its main characters, setting the tone for much of season two of Scrubs to follow.

I can’t speak enough to how well this setting works; it pulls Cox as far away from the three doctors as possible, which allows the show to refocus on Cox as a human being, rather than the knowing, sneering seer of Sacred Heart. This not only allows Cox to be a more vulnerable, empathetic character, but it allows Scrubs to really begin informing his relationship with Jordan, and why their marriage fell apart.

For the first fifteen minutes of the episode, it’s a pretty typical story about two exes enjoying a terribly-planned sex fling – and then as the story about the three doctors shifts to observe their evolution, “My Nightingale” begins to contrast their growth with Cox’s lack of maturity. His personal and professional recklessness is ultimately what drove Jordan away from him, as we find out; and as she notes, she’d rather be alone than watch him sabotage his career and relationships over and over, in some twisted attempt to punish himself for the perceived mistakes he’s made in life. 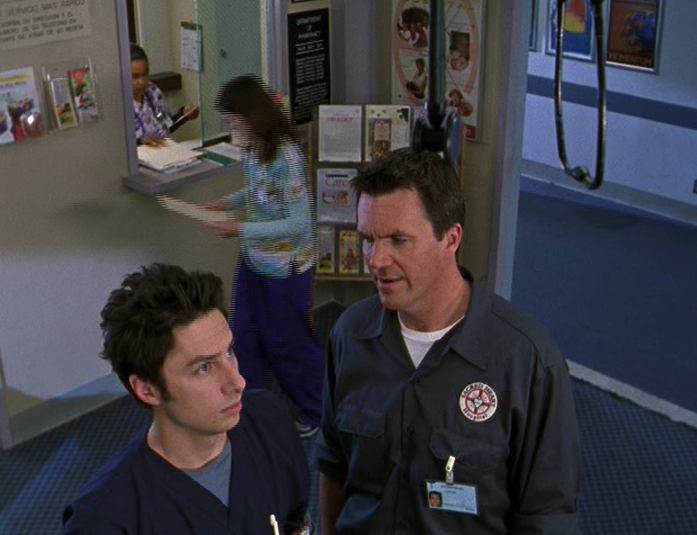 This isn’t just a “Cox is a harda**” story; when Cox reveals his lingering feelings for Jordan, the whole tenor of their story changes. Of course, McGinley and Miller are both up to the task of delivering on that scene, and it adds so much texture to their conversation; Jordan’s not a woman to beg, but you can feel her pleading silently to Cox to change his ways and evolve, while Cox tries to tamp down his demons and swallow his pride long enough to let her back in again. “My Nightingale” doesn’t back away from the complexities and complications of their relationship – and it completely re-configures how the scenes are read, the humor that springs from their frustrations with each other dissolving into something a little more lonely and desperate, giving incredible depth to their later scenes, where Cox ultimately disappoints Jordan, kicking himself while he’s down once again.

That disappointment, ultimately, is married to what happens in the other story, where J.D., Elliot, and Turk take control of their lives, never backing away from the risks they take in the episode. Individually, their stories are a bit of a mess (Turk’s in particular), but when Scrubs puts all three of them in the same room, naturally the stories come to life, linking together under the shared exploration of how these three handle the stresses of being on their own for the first time. The story may follow a conventional arc (they work together, take a chance on the tough choice, and it works out), but it’s in how that story delivers on a character level that makes it so satisfying – primarily for J.D., who takes the lead and guides his two friends through a series of difficult decisions. 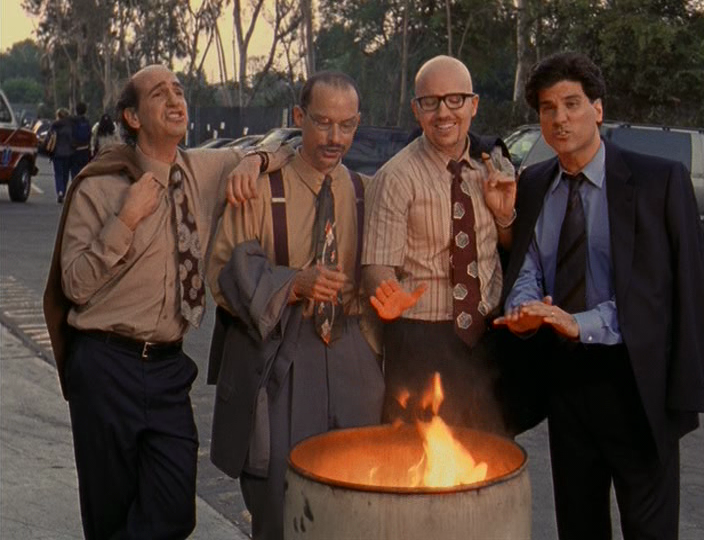 Or so he thinks; one of the many little touches I love in this episode comes from the ending, when it’s revealed Carla switched her night off to help J.D., Elliot, and Turk through their first night alone in the hospital. It’s really that moments that seals every single scene preceding it, the idea that growth is easiest with the support of the ones we love. It can still be a struggle, but it doesn’t have to be one done alone.

The point is certainly made that Carla is the most under appreciated element of Sacred Heart, but it’s what she represents that is ultimately what Scrubs values the most: how much easier taking big life and career risks are, when you have the people who love and support you by your side. Change never comes quick or easy – but it can feel like it, with the right people around you, and boy, does “My Nightingale” nail that idea, putting a powerful little coda on a terrific return to form for Scrubs.

– It’s such a cliche to say a pregnant woman is “glowing” – but holy crap, is Christa Miller glowing in this episode.

-The Peons return! But this time, they’re cool – they sing 80’s TV theme songs in front of burning garbage cans.

– Big Chief Flop Sweat is a fantastic nickname for Ted, and one I wish Cox used more often.

– Baxter jokes make their debut in this episode, adding even more color to Kelso’s unseen personal life – and his relationship with Ted, a gem Scrubs is only beginning to uncover.

– “On-site property management, including pest control, night time security, non-arborial garden services… AND tenant-related easements and liens.” “You got a raise?” One of my favorite exchanges in Scrubs history.

Peacock’s ‘The Capture’ is a Compelling Mystery

The Capture is easily the most promising series yet from Peacock The new streaming service Peacock’s original offerings at launch lean heavily towards the...

Intelligence Review HBO Max may have won the bidding war to stream the entire run of Friends, but Peacock managed to land an original...

The Peacock's latest foray into family comedy is an underwhelming attempt to straddle the line between progress and tradition.