On paper, “My New Coat” is an easy episode of Scrubs to get excited about, being credited to the same writer/director combination behind season one’s “My Old Lady”. Immediately establishing itself as an episode about identity is even more promising – which makes it a major bummer when the episode mostly fails to deliver on its ideas through the first and second acts of the episode, stumbling its way to low key climatic moments that just don’t have enough humor, or more importantly pathos, to carry rather light plots for 23 minutes. While it’s a definite improvement over “My Big Mouth” – save for one wildly disappointing Elliot story – it’s still nothing memorable, a perfectly middling, forgettable episode of Scrubs more notable for its missed opportunities than for the few moments it really nails.

“My New Coat” hammers home what “My Big Mouth” made abundantly clear: gender conflict is not Scrubs‘ strong suit.

The central conceit of “My New Coat” is solid enough; spending a lot of time in a hospital allows one to play pretend as anyone they want. There’s a freedom to spending the majority of your time interacting with strangers: JD wears a white coat and suddenly feels recognized, Cox is free to be an asshole to whoever he wants, and the Janitor can convince anyone that he too, is an actual doctor. When the threads of the episode lean towards the ways we reinvent ourselves professionally, “My New Coat” has a surprising amount of legs – it’s when “My New Coat” shifts towards the rippling effects of these personas on our personal lives that “My New Coat” loses its balance a bit. 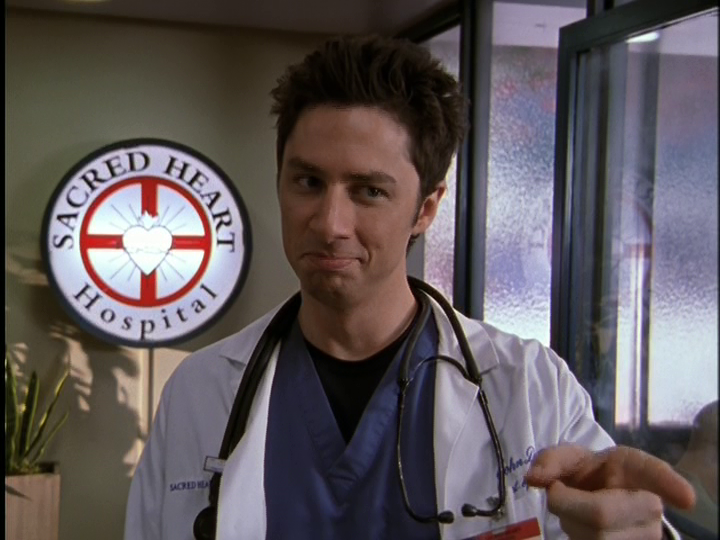 Perhaps the strangest pairing of the episode is Elliot and Turk: although JD’s initial observations serve their typical role as the framing device for the story to follow, Elliot and Turk’s adventure down Chauvinist Lane dominates more than half the episode time. After Elliot has a one night stand with a cute doctor, she’s labeled as the hospital slut by the entire staff, from the nursing staff all the way up to Kelso. The surgical gang in particular is fascinated with Elliot’s perceived promiscuity, continuing the forgettable thread from the previous episode, with Elliot replacing Bonnie (who has disappeared from sight) and sex replacing work performance.

“My New Coat” hammers home what “My Big Mouth” made abundantly clear: gender conflict is not Scrubs’ strong suit, being both a product of its time and a show that’s so capable of telling other, meaningful stories about life in a hospital. It is absolutely a major blind spot the show only occasionally approaches at addressing in a meaningful way; most of the time when it tries to construct stories around the dichotomy between men and women in the medical industry, however, it falls flat on its face. “My New Coat” is no exception, and feels particularly sour coming on the heels of “My Big Mouth” – Elliot getting excited at being labeled the hospital slut is the kind of idea that seems empowering at first, until Scrubs spends the rest of the episode cracking jokes at the systemic sexism that allows Elliot to feel being known for her sexuality makes her more popular at work.

To be honest, the Elliot material in “My New Coat” is nowhere near as vicious as the horribly thin characterization of Bonnie in “My Big Mouth”; but it’s no real improvement, either, as Elliot once again has to use her shame to teach Turk extremely obvious lessons about his behavior and privilege. And neither of these episodes leans into the unique position of privilege and disadvantage Turk is in as a prominent black surgeon – which I’m actually thankful for, because racial humor is the only thing Scrubs does worse than gender dynamics.

Yet, it still leaves a bad taste to watch Turk completely ignore Elliot’s pleas to earn his respect, and only realizes he’s being a pig once a doctor he’s admonished for being extremely short points it out to him. Man-splaining, y’all! 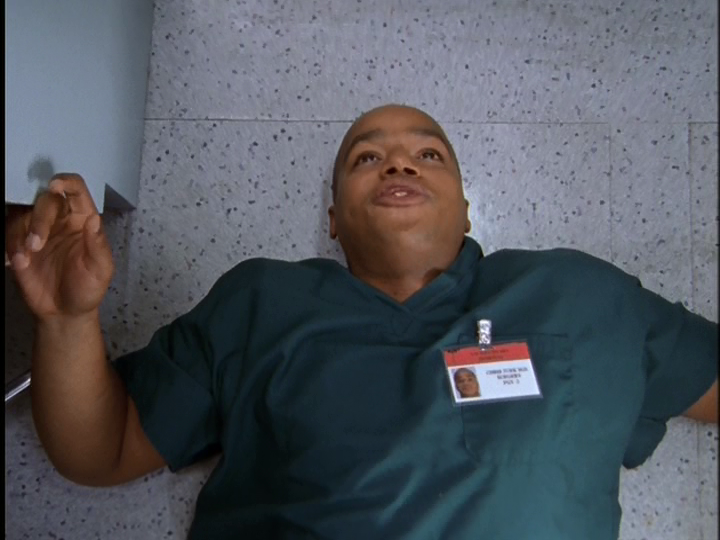 It’s also strange how little a role Carla once again plays in Turk’s story; as the senior member of the central quartet who also works in an extremely marginalized, but critical, role at hospitals, Carla would have quite the perspective on the struggles Elliot is facing, as well as the damage she’s doing to herself in the position Elliot’s excited to occupy around the emergency wing. Instead, Carla exists a device to move plot along, a bystander in a story that would greatly benefit from her perspective as the true nucleus at the center of Sacred Heart.

Unsurprisingly, the most effective moments of the episode once again belong to Dr. Cox, who bypasses the regulations for a clinical trial, in order to admit one of Elliot’s patients into it. When it is revealed the woman was actually eligible and wasn’t initially admitted to administrative error, Cox shrugs and says he would’ve done it anyway, and enjoyed watching Kelso sweat and squirm over it.

A subtle callback to the final moments of “My Case Study”, Cox throwing the middle finger up to The Man in the name of healing paints another stark picture between the optimism of young people trying to figure out who they are, and a grizzled vet who has condemned himself to play the same role forever. Cox is stubborn by nature, and vehemently attaches himself to a performative persona to hide the deeper anxieties of a man who knows he’s the one holding himself back. To know the hard truths about yourself is one thing; it’s allowing that knowledge to limit you that ultimately hurt the most. 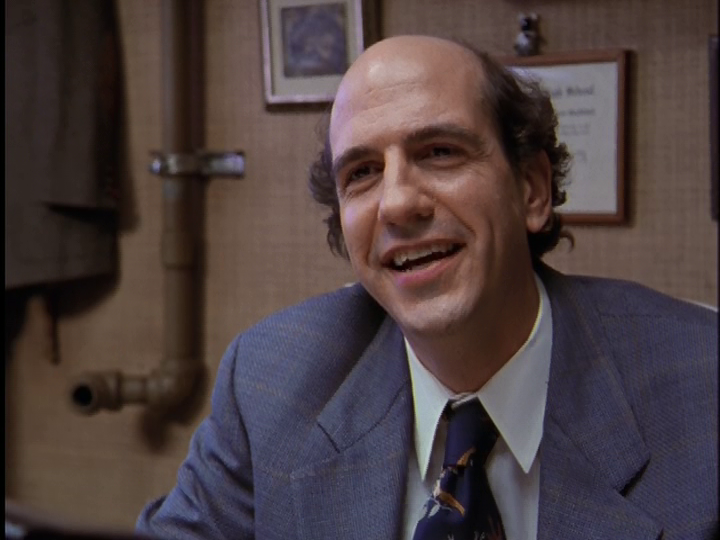 In “My New Coat”, that attitude is held up as a shining beacon; but Scrubs is sharper than this, planting the seeds for deeper, more dangerous conflicts with Kelso later in the season, and the series. Ted’s right to be extremely nervous mediating their interactions, or trying to stand up to either one of them: Kelso and Cox are two men who think they understand who they are, forcing themselves into dissonance with people they have more in common with then they might think. As Scrubs matures, it will continue to unravel these characters and redefine their relationship: it’s fun to see those seeds being planted this early on, hinting towards more personal, complex explorations of a relationship defined in pretty stark, one-dimensional terms in season one.

However, those four or five minutes at the end of the episode can’t erase the presence of the first eighteen: and it’s in those scenes where “My New Coat” fails, unable to deliver the big laughs or the big emotional moments the series is remembered for. As Scrubs settles into its sophomore season, the growing pains are real, and “My New Coat” fumbles its way through these larger, more ambitious stories and societal reflections. Large swaths of this episode are completely forgettable and small portions are down right cringe worthy; but in those few, fleeting moments of glory, it’s clear Scrubs is ever so slowly finding its voice, a promising sign for the season to follow.

The Mid-Season Replacements Podcast Episode 46 – “The...

How to Make an Entrance #6: Indiana Jones in ‘Raiders of the Lost Ark’