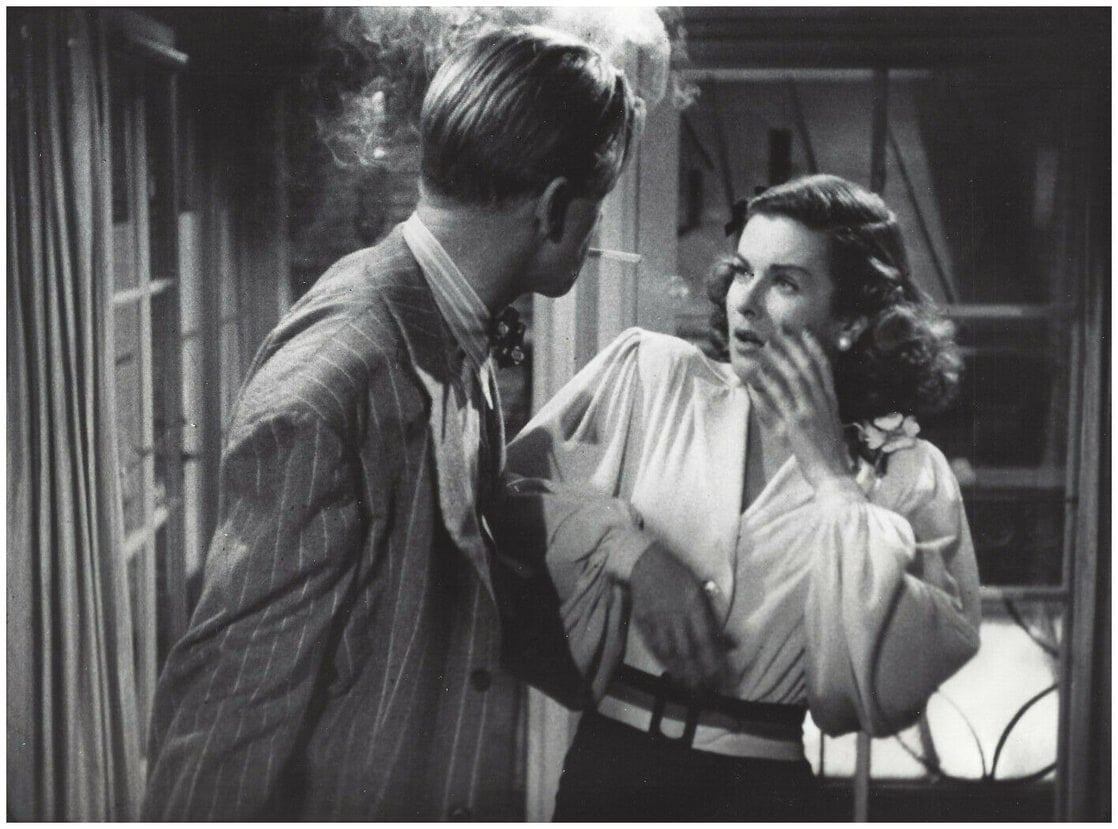 In a private party set up by J. J. Hogarth (Russell Hicks), president of one of New York’s largest banks, honours are bestowed upon the company and its employees for their diligent service. Among those celebrated is Christopher Cross (Edward G. Robinson), faithful cashier for 25 years. Chris is a mild-mannered, milquetoast sort of chap. He lives with his wife Adele (Rosalind Ivan), who only married him out of convenience after the passing of her first husband; she actually loathes him. A hopeful painter, all Chris has to call his joy is amateur painting on Sundays. Fate has something far different in store for Chris once he leaves his employer’s party. He stumbles upon a man physically assaulting a woman on the sidewalk, prompting him to come to her aid. The young woman, Katherine (Joan Bennett), is thankful for his help and the two spend a few hours at a late-night restaurant. Katherine seems charmed by Chris and he is clearly smitten by her. What he does not know is that Kitty and her boyfriend assailant Johnny (Dan Duryea) are con artists about to take advantage of Chris’ gullibility and love of art to pump as much cash out of him as possible.

Cinephiles and historians tend to agree that Fritz Lang is one of the great filmmakers of his generation. What can be praised is his superb sense of finding challenging stories and reaping all of their poignant dramatic beats to formulate tales that are in no way easy to digest. Perhaps not since his 1931 German-language classic M has Lang taken on as heartbreaking and devastating a story like the one he weaves in Scarlet Street. The picture plays on the emotions whilst developing dark, depressing themes with merciless accuracy, leaving the viewer staring at the gloriously large words ‘The End’ and thinking “Oh dear God.”

Scarlet Street is about a lot of things, but where it hits home in the most vicious way is the idea of manipulation in all its facets: why people manipulate others, the extent to which they do it, and what sort of victims the perpetrators prey on. From this angle, the film studies how vile people can be towards one another and how pitiful the conned are. Nice people are, alas, the perfect target for risible wretches like Katherine and Johnny. The more open nice folk are to believing the pleas of others in need or who play with their heartstrings, the more likely it is they will be sucked into an inescapable vortex of lies, deceit, and broken hearts. In essence, Lang lays out a story that unforgivably shows how nice guys finish last sometimes and in the worst possible way. In an extremely cynical view of the world, Scarlet Street argues that being too kind and too accepting is bad, stupid even.

Chris could not be a more docile fellow if he tried. He would not hurt a fly even if it disturbed him through lunch. His kindness and tender nature represent faults, however. They make him gullible and weak in the face of those with more forceful personalities, as is clearly demonstrated by his one-sided marriage with Adele. Chris explains to a friend that she had shown sweetness when they first met, probably in the aftermath of her first husband’s demise. Time has brought out the worst in her: impatience, intolerance to his interest in painting, and an all-around tempestuous attitude fit for a dictator. She exudes a feverishly domineering personality that basically steamrolls over Chris at every opportunity. The effect this can have on the viewer is one of ambiguity. One cannot help but feel empathy for poor Chris, whereas another wishes the protagonist would muster the courage to even the playing field a bit. He is utterly incapable of doing so and it is while battling his sorrow that Katherine and Johnny, the latter operating behind the scenes, come along and ride Chris like a money train until the bitter truths emerge. But by then, it is too late.

Chris’ ordeal with Kitty only further emphasizes how benevolent a person he is and, because of that quality, how much of a fool he can be played for. It gets so bad that eventually, out of his unflappable sense of nobility and love for Kitty, he accepts having her take the credit for his paintings, critically and monetarily. Never had Chris thought his work would be appreciated by the experts or public at large, but now that his efforts have borne fruit (through Johnny’ sneaky wheeling and dealing), he is compelled to help Kitty who continuously refers to her budgetary struggles resulting from how trying it is to make it as an ‘actress’. Chris is far too much in love at this stage to hold back but the more he is willing to give, the more Kitty and Johnny are willing to take. Give someone a chicken wing, they ask for the leg. Give them the leg, they ask for the breast.

Scarlet Street would simply not be the magnetic piece of cinema it is without Lang’s direction. He brings so much to the proceedings because he understands character, which entails understanding humanity as it really is. Lang is not the sort of director to hold back when telling tales about the perversion of human society. His camera set-ups and the work of his editor Arthur Hilton deserve the highest of praise, for a countless number of times they beautifully communicate the bitter irony permeating throughout. The scenes in which Chris, now cognizant of the whole truth of what Kitty has done to him, arrives at her condo for a confrontation features brilliant mise-en-scène.  Kitty is seen lying on the bed conversing with a friend over the phone about how a furious Johnny is coming over to settles a feud. The bedroom door creaks open, to which Kitty instinctively calls out Johnny’s name. The shot of the door opening is taken from the side in which direction it swings, concealing the identity of the visitor from Kitty and the audience. Chris’s reveal is therefore as much a surprise to Kitty as it is to the viewer. In an instant, a palpable tension, even fear of what might follow gripsKitty and the voyeur audience.

Lang always knew how to equip himself with the right cast; Scarlet Street offers a slew of effective and in one case affectionate performances, starting with none other than Edward G. Robinson. Predominantly known for his boisterous roles, Robinson looks and behaves like a shadow of his usual self. Chris may have a big heart, but he is meek and pathetic. He has no snappy retorts to throw at people like darts. In fact, he stutters most of the time, lacking the courage to stand up for himself. The only time he believes he’s doing anything grand is when he’s duped by a good-looking dame who thinks he is a wimp. This is not Little Caesar Robinson or Illegal Robinson or even the more mild-mannered The Stranger Robinson. By the film’s end, he is as disheveled and broken as any man can be. Chris represents one of the most different roles Robinson portrayed, with the actor digging exceptionally deep. The rest of the cast isn’t as impressive, yet hold their own (although there is no question Robinson is the most sadly magnetic actor of the bunch). Joan Bennett, as Kitty, is excellent as an enormous sleaze bucket masquerading as a woman in dire need of financial and moral support. She can turn on the requisite charm for Chris, but when smooching around with her main squeeze Johnny, she is lazy, contemptuous, and freely admits to enjoying doing bad things and liking bad people like Johnny. The performance works because the character is so absolutely loathsome, a disgusting splotch of societal filth. Dan Duryea, as Johnny, presents a different side to villainy, demonstrating alarming gumption, and a gung-ho attitude towards cheating, stealing from and swindling the next sucker. When conversing with unsuspecting victims, Johnny will often showcase a humongous grin stretching from ear to ear to mask his true intentions. His enthusiasm is so forced viewers will want to give him a good shiner if they could.

After watching so many movies from the same genre, a cinephile begins to recognize its tropes and signature qualities. Stumbling upon a movie that feels as different and as powerful as Scarlet Street is an exhilarating experience. Because of the story it tells, it also ends up being an infuriating one. Lang’s picture is breathtaking, a gut punch, a reality check, and a movie one does not soon forget.