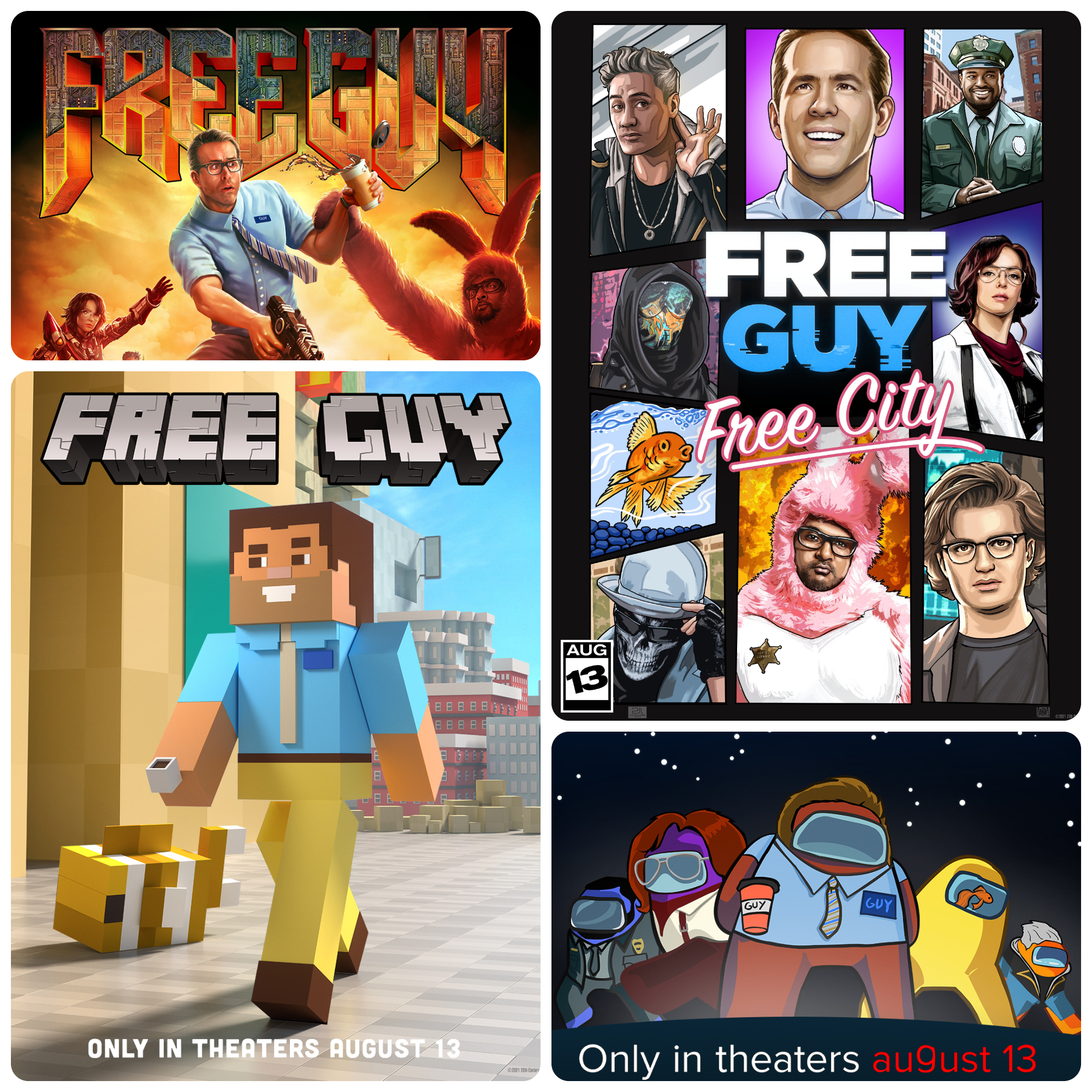 Ryan Reynolds has always been the master of breaking the fourth wall and it would seem that his newest movie Free Guy is no exception. Free Guy tells the story of Guy- played by Reynolds- , an NPC in an online video game who becomes self-aware. The movie is sure to be chock full of video game Easter eggs and references and the promotional posters are awesome throwbacks to some of the most well-known video games of all time. Let’s take a look!

All Images Courtesy of the official Free Guy Twitter

First up is a play on the infamous Super Mario 64 cover. Guy looks a little creepy in Mario style but I think that might just be the giant eyes. I like the attention to detail of him flying over the city with a pair of wings just like how Mario flies over Princess Peach’s castle. Cute but still kind of creepy.

Guy becomes Blanka in this recreation of the Street Fighter 2 box art. Not a comparison I was expecting but it isn’t unwanted. Jodie Comer’s Millie takes on the role of Chun Li whilst Taika Waititi’s Antoine becomes Ryu as he sprawls on the ground. There is also a broken gold fish bowl with a flopping fish in the background too. That’s a new element. You have to appreciate the effort that this must have taken from the artist to recreate this iconic box art. It perfectly reflects that late 80’s/ early 90’s art style. Not sure who the artist behind the posters is but kudos to you sir or madam!

Again, kudos to the artists behind these masterpieces. They are seriously impressive. Also, who is that guy in the bunny outfit? I have seen him in the trailers but I need more information.

We will likely never get a Grand Theft Auto movie so this is the closest thing we have. Enjoy it. Also, I’m guessing that the fish has an actual role in this movie as this is the second time we are seeing him in these posters. If the fish dies, we riot.

You can’t make a video game spoof without involving Minecraft in some way. The legs are a little bit awkward in this one as they don’t actually seem to be attached to Guy’s body but whatever. Minecraft! Oh and the fish is back in Minecraft block form. Protect him at all costs.

You know, I often think about the Inner Sloth team- the Among Us devs- and wonder if they ever imagined that their game would skyrocket to super stardom in the way that it has. Among Us has sort of become the new Minecraft in that you can’t really talk about video games without at least referencing its existence. Guy, Millie, Antoine and Lil Rel Howery’s Buddy get suited up as crewmen from Among Us in this poster. Fish does too and this time, he is looking pretty sus.

The relaxing world of Animal Crossing also gets a spoof with these Free Guy posters. Joe Keery’s Keys gets an inclusion here as villager alongside the other characters and of course Fish. That is what I am calling him now. He is Fish. Fish is love. Fish is life. Side note, how long do you think it will be before Nintendo hits this movie with a cease and desist?

Last but not least, the Free Guy movie parodies one of the worst box arts ever released. The 1987 Mega Man box art was just unpleasant and super awkward thanks to the weird character pose and the art style that did not go with the franchise whatsoever. This Free Guy variant actually looks way better but I love how it is purposely incredibly awkward just like the Mega Man cover. Guy’s expression, his odd anatomy, those chunky thighs, his lack of a neck; all of these things come together to make a fantastic parody of an already pretty funny piece of video game box art (even though it wasn’t intentionally funny).

Make sure to check out Free Guy when it hits theatres on August 13th, 2021.