Roasting a Clover to a Charcoal Black

Black Clover. Oh boy, Black Clover. Where to even begin with this show? The first two episodes are bad, plain and simple. They are bad as a sh?nen, they are bad as an anime, and they are bad as a form of entertainment period. Maybe most importantly however, they are bad for the health of your ears. I pray you weren’t wearing headphones with the volume jacked up the first time our obnoxious bullhorn of a protagonist released the all-important limiter that is his mouth. If not, I at least hope you have good health insurance to cover for the ruptured eardrums that resulted.

It’s not the first time we’ve had a hot-blooded protagonist for a sh?nen, and it’s certainly not the first time we’ve seen that protagonist virtually powerless in a world of power. Asta’s heaven piercing screams aren’t all that’s wrong with Black Clover, although they are a large part of it. The issues with Black Clover’s debut run deep, and rather than roasting it on a pike by itself, it would be far more entertaining to compare it to the first two episodes of a similar sh?nen anime to highlight just how inadequate it really is. Currently ranked in the Top 30 on MyAnimeList and having just recently wrapped up its second season, that show is My Hero Academia and its protagonist Izuku “Deku” Midoriya.

Competency is the name of the game when it comes to powerless protagonists suddenly coming into power. It makes the viewer want to cheer them on as they can see potential in the character’s growth. Part of that competency is determination, which Asta and Deku both check out for. Determination without some amount thoughtfulness, though, is just brash stupidity.

Both Black Clover and My Hero Academia featured hostage situations within their first two episodes and both Asta and Deku rushed in to resolve them. Deku hurried to rescue Bakugo from the slime villain despite the fear he felt and his own powerlessness. Even though he had no chance of winning, Deku used his resourcefulness to buy what time he could before All Might could come save them. Deku demonstrated that all important base level of competence that gets the viewer, and All Might, on his side. While he accomplished very little, Deku established his potential to accomplish more with the proper guidance. 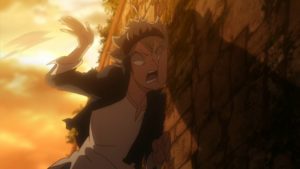 Here we can observe ‘smooshed faceicus’ in its natural habitat.

Meanwhile, we have Asta, who leaped wholeheartedly into his hostage situation… straight into a wall. Why was this necessary? Was it supposed to be funny? Was it supposed to be endearing? It was none of those. All his grand entrance did was reaffirm the creeping suspicion the viewer had that Asta is a few screws short of even being a nutjob. His pointless struggle afterward showed no potential beyond blind determination, which isn’t enough to get the audience on his side. If anything, it just makes them want him to give up so he would stop shouting out every single one of his lines in the exact same way.

Putting Asta’s incompetency aside, at least he awoke to his powers at the end of the first episode. Alright neat, we should get this flashy sh?nen fight right off the bat in the second episode where he mercilessly beats up this character we were very clearly made to hate, right? Wrong. Instead, we got a flashback that took up three-quarters of the episode detailing Asta’s motivations for wanting to become the Wizard King.

Again, just like Asta’s wall flop, why was this necessary? Why was it necessary to have such a lengthy flashback right when the audience was ready for a fight? It puts such a hard stop to the little momentum the show had built that it makes it impossible to care about the events occurring in the flashback. Not to mention the flashback itself provides no compelling reasons to care. 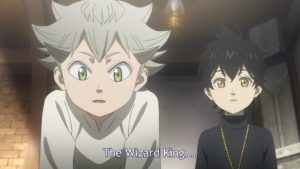 Why does Asta want to become the Wizard King? Well… because someone read a children’s book to him when he was young and he simply felt so inspired by the ambiguous story that gave no specific details. It’s such a flimsy and half-baked motivation, especially compared to Deku’s role model, All Might, in My Hero Academia.

All Might is constantly in the eyes of the public and by extension, Deku’s eyes as well. He rescued this many people from a crisis. He beat this specific villain that was causing trouble. He resolved this specific potentially disastrous situation. All while giving a reassuring smile to all he stands to protect. All Might’s heroic deeds are definitive and significant and it’s clear why they impact Deku’s life in such a profound manner. All that was established during a flashback sequence in the first episode that lasted a mere three minutes. 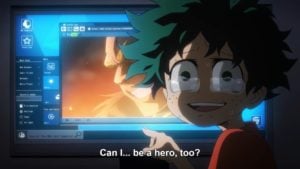 This single scene is enough to assert just how meaningful All Might is to Deku.

Asta’s role model is nothing more than a vague concept at this point in the series. It’s as plain and one-note as his determination is and the fact we spent nearly the entire second episode establishing that fact just piles onto the frustration. Adding insult to injury, the fight scene we were “rewarded” with at the end of the episode wasn’t even worth the wait. It was over in a single blow and didn’t showcase exactly what Asta’s powers are capable of.

Why should we care about Asta? That is the question Black Clover has yet to answer. In fact, it’s given us ample reason to not care about him at all. His character description thus far contains nothing but blind recklessness and a propensity propose to Sister Lily any chance he gets. Oh, and that he’s also f#*$ing loud! To say the show’s outlook from this point forward is bleak would be an enormous understatement. 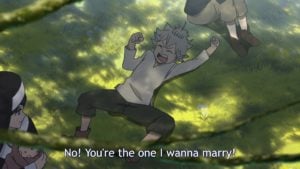 Black Clover needs to get the audience on Asta’s side. He needs to show potential as a character that can grow past the stereotypical role he’s been given. Asta doesn’t need to suddenly become a different character, but we need some reason for why he holds such unfounded confidence. Otherwise, he just seems like nothing more than a delusional teenager in desperate need of a hard reality check.

With its first two episodes out of the way, the exposition of Black Clover has, hopefully, been completed. The direction the series goes in with its third episode will be a critical turning point that will serve as a litmus test for the rest of the story. Asta can still redeem himself, but he faces an enormous uphill battle. He has a lot to prove and with the first two episodes arguably wasted and only eleven more to go, it’s hard to have faith anything will be accomplished by its end.