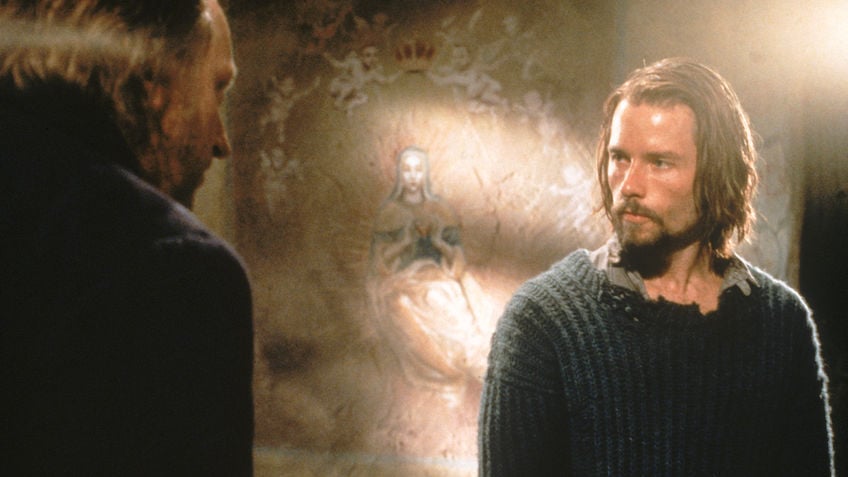 There are so many wonderful horror movies in the world, festering in the past with no one to appreciate them. Chief among them are movies like Ravenous, films so vastly ahead of their time or completely passed over by the public that they really deserve a second look from the general viewing public.

A grimly black comedy about cannibalism and the question of morality in an inherently immoral world, Ravenous centers its struggle between cannibal soldiers Boyd and Ives. Both resorted to cannibalism in order to survive certain death, but while Boyd yearns to forget the awful experience, Ives yearns more and more for the flesh of his fellow man.

This creates the central conflict of the film. As Ives, initially passing himself off as a man called Colqhoun, leads Boyd and his cohorts from their remote military outpost of Fort Spencer to a cave, where a Donner Party-like tragedy has lead to the deaths of all but two of its members.

As the treacherous Ives reveals his true nature, a massacre follows and both men are forced, once again, to descend into cannibalism in order to survive. While Boyd torturously succumbs to the urge, Ives relishes in the joy of the feast. Here their conflict is doubled in scope, and they remain at odds for the rest of the film.

This ongoing conflict is essentially the backbone of the film, but to focus merely on the plot of Ravenous misses so much of what makes the film special. Undoubtedly the MVP of the movie is Robert Carlyle, who jokes sardonically, laughs maniacally, and generally chews his way through the scenery of the entire film as the villainous Ives.

In almost complete contrast, Guy Pierce, as Boyd, is so subdued and cut off emotionally that he barely seems to have any emotion at all. Naturally their personalities are reflective of their dispositions. Boyd is struggling with survivor’s guilt and the trauma of his experience, while Ives has tossed his former convictions to the wind, leaning into his new lifestyle with excitement and glee. “Ah, morality, the last bastion of a coward,” Ives dryly scolds Boyd in the final act.

The cast is filled out with great turns from character actors like Jeremy Davies, Jeffrey Jones, David Arquette and Neal McDonough. Jones is especially effective as a morally conflicted turncoat, while a young Davies dials in on his oddball charm as an incredibly anxious man of faith.

As these odd, disparate characters rub up against each other, descending into panic and death as a result, viewers can’t help but laugh, even as the horrific depravity of the struggle grows more and more awful. Part of the success of this delicate balance between humor and horror comes from Michael Nyman’s brilliant, off kilter score. The soundtrack of the movie switches between chilling orchestral numbers and hoedown-like zingers on the drop of a dime, just as characters go from malicious to amusing throughout the film.

Of course, the amount of joy you might be able to take from Ravenous might be directly tied into how many cannibal puns you can stomach (and that pun was absolutely intended). Ted Griffin’s script is absolutely peppered with them, mostly delivered with relish by Robert Carlyle’s Ives. One standout comes as Ives torments Boyd about eating a brassy soldier in the mountains. “You didn’t finish! Well, I don’t blame you, he was tough… but then, a good soldier ought to be!”

Like with any great black comedy, particularly a horror black comedy, how much Ravenous works for you is based almost completely with how on board you can get with its teetering tone. The way director Antonia Bird shifts the feeling of the film with the nature of the script is essential, and her work here deserves to be praised for the knife’s edge it walks through the movies runtime.

Still, in a movie this focused on morality, the question is inevitably: what is Ravenous trying to say? While some have subscribed to the idea that the film is a tortured metaphor for homosexuality (the religious symbolism present throughout the film certainly backs up this theory), in a more broad sense, Ravenous is about how quickly the illusions of civilized man can fall away during a desperate struggle for survival.

Despite the laughs along the way, this marks Ravenous as an incredibly dark film, and one not particularly impressed with mankind’s many “achievements”. The script is critical of both missionary work and colonialism, pointing out their import at the time in which the film is set, while mocking the notion that either one makes for a better man, or a better world.

Notably lauded by critic Roger Ebert upon its release (with his pull quote “I loved Ravenous!” featured front and center on the case) Ravenous, nonetheless has faded into obscurity since its release at the turn of the 21st century. As such, this grubby little gem of a movie deserves a second life, and is well worth seeking out for horror fans. With hundreds of great horror films in the annals of cinematic history, there is still none quite like Ravenous.

For more on Ravenous, check out the following episode from the Sordid Cinema Podcast…