The more anime someone watches, the more they come to accept its… eccentricities in storytelling. They become more willing to suspend their disbelief of common tropes and plot devices and write them off as, “Well, that’s just anime for you.”

The Bunny That Plays With Expectations

This deception starts right from the title itself, Rascal Does Not Dream of Bunny Girl-Senpai, which one could draw any number of conclusions from alone. This is not a show about a girl traipsing around in a playboy bunny outfit, but more like a series of case studies concerning various social dilemmas commonly confronted by adolescents, such as public perception vs. self-perception, feelings of inferiority in the presence of talent, and perceived “atmospheres” that can’t be broken.

Each of these dilemmas is represented by a girl whose problem is manifested in some physical manner, ranging from becoming invisible to those around her, to cuts and bruises suddenly appearing on her body in reaction to cyberbullying. Despite the supernatural circumstances, the root causes are very much real and serious, and series protagonist, Sakuta, treats them as such. 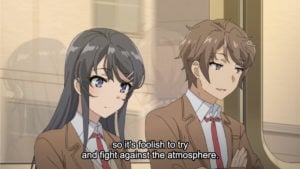 Sakuta is a snarky and sarcastic individual, but he’s also a tad jaded. It’s this jaded nature that allows him to speak his mind in situations that many drama series protagonists would shy away from, and that results in getting to the heart of the matter much faster.

This also applies to his relationships. Where many a drama will build its entire story around the development of a romantic relationship between two characters, Rascal Does Not Dream of Bunny Girl-Senpai compacts that arc into a tight, all-killer, no filler, opening three-episodes when it could have, for all intents and purposes, gone on the entire series. All without even remotely feeling rushed. This is just one of the many surprises the show has in store for viewers who have come to know what to expect from anime stories.

The real star of the show in terms of viewer subterfuge, however, and the real reason for this article, is Sakuta’s younger sister, Kaede.

The Dream That Deceives the Dreamer

From the start, Kaede has been the definition of an over-affectionate little sister arch-type. She clings to Sakuta in an almost unhealthy manner and dotes on him while speaking in third-person and throwing around the all-important Onii-chan term whenever she can. It’s an overused character trope that regular anime watchers are all too familiar with. 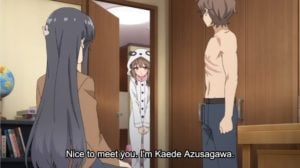 The reason Kaede is accepted in Rascal Does Not Dream of Bunny Girl-Senpai is partly due to this developed numbness, but mostly because of the sincerity she puts forth in her actions. It doesn’t come across as a facade, and the execution of the stories around her are done so well that it becomes easy to just file Kaede away to the back of the mind as one of “those” characters, not giving it any more thought than that.

But then episode twelve aired, ‘Life is a Never-Ending Dream,’ and all of those facets of Kaede’s character were suddenly given reasons for existing, and highly valid ones at that. The cliched character Kaede was given belies a reality far more dire and severe than was ever indicated before.  At least… more than what seemed to have ever been indicated to most seasoned anime fans.

Here’s the thing, though, the hints that something lies beneath the surface would be plain as day to someone unfamiliar with the little sister character type, or even anime in general.

Why does Kaede speak in third-person? Where the anime fan would probably answer, “Because that’s a common thing for her kind of character. That’s just anime for you,” someone new to the medium, or even just a casual watcher of it, would be far more perplexed. It would be much harder for them to write it off and more likely to become a sticking point throughout the series. This is emphasized even further by how realistically the characters surrounding Kaede are portrayed, so why is she alone the exception? 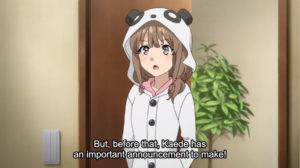 Is the trauma she experienced really bad enough to create this crippling fear of the outdoors? Why is Kaede so overly-affectionate towards her brother? These kinds of questions would all serve as red flags outside of the anime medium, but because they are in an anime they end up flying under the radar.

This is where the brilliance of Kaede’s personality truly shines through. From the get-go, her character was designed to deceive and distract the regular anime watcher. The more anime one has consumed, the more likely one is to fall for this ploy, taking “hiding-in-plain-sight” to a new level. It’s a trap tailor-made for the show’s target audience, utilizing their own jaded nature in a glorious Trojan-horse tactic to catch the viewer completely off-guard.

This is a delightful little trick that reiterates the creativity anime still has to offer. People often talk of how series turn tropes on their heads, and the surprise that results, but Rascal Does Not Dream of Bunny-Senpai did one better, using a trope in all its unmodified glory for a specific, poignant purpose. It demonstrates a level of awareness of the anime community, and the willingness to use that to the show’s advantage, and that is a trap I’d love to fall for again.

You can watch Rascal Does Not Dream of Bunny Girl-Senpai on Crunchryroll (subbed) and Funimation (dubbed).

For another show that deceives veteran anime fans, check out SCHOOL-LIVE!

Anime Ichiban #9: And Now the Weather With Makoto Shinkai