40 Years Later: Ralph Bakshi’s ‘The Lord of the Rings’ is a Delirious Vision of Middle Earth

Peter Jackson’s version of The Lord of The Rings is widely considered to be the best high fantasy adaptation of all time, a sweeping epic that mixes spectacle with character work to magnificent effect. Understandable that eyes were rolled then with the revelation that Amazon Studios bought the rights to Tolkien’s work, deploying a generous $1 billion budget to bring the book to the small screen. How can you improve that? Yet, Jackson’s adaptation was not the first. The 40th anniversary of Ralph Bakshi’s animated version is a great reminder that no two adaptations of any book are the same, and that Middle Earth is a rich enough place to accommodate drastically different visions. In fact, a look back at Bakshi’s version shows why a new version of Middle Earth should be welcomed.

Although highly flawed in terms of character work and storyline — and working off a $4 million budget 80 times smaller than the $330 million Peter Jackson was gifted — The Lord of The Rings was a fine effort to bring Middle Earth to the big screen. Mixing traditional cel animation with innovative rotoscoping techniques, Ralph Bakshi’s version is simpler than Jackson’s in conception but darker in execution. While a sometimes terrifying animated vision of a world beset with darkness, it suffers massively from a botched production schedule.

The story of both productions couldn’t be more different. While Jackson had plenty of time to write treatments, scripts, and storyboards before starting a lengthy production schedule, Bakshi made The Lord of The Rings in just two years, forced by United Artists to meet a difficult deadline and deliver the film under budget. This pressure forced Bakshi to improvise wildly, something no director could have pulled off given the innate scope of the story. Filming across USA and Spain, then scrambling to finish the edits in time for release, The Lord of The Rings shows its scars across its frustratingly unfinished product. 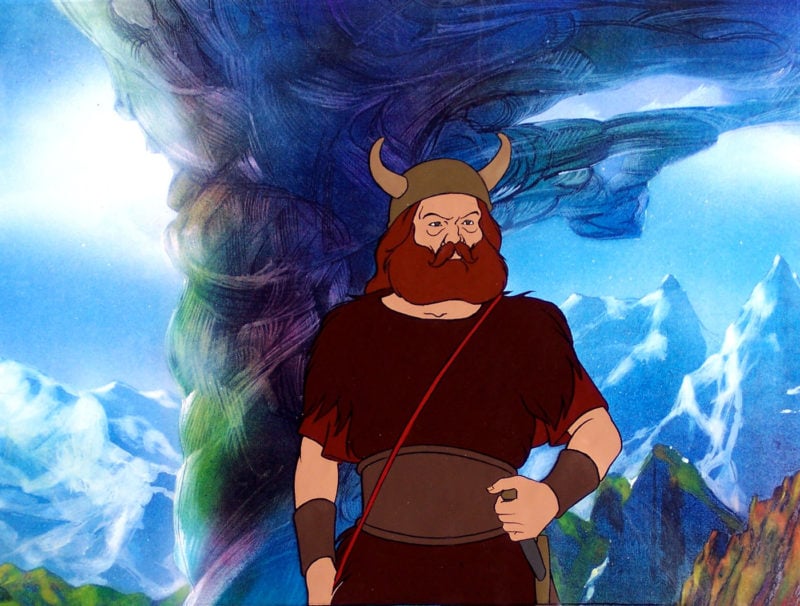 The eternal appeal of Tolkien’s tale is just how vast it seems to be. Even the original novel, a kinda-sequel to The Hobbit, is steeped in a wider mythology that requires you to read his other books to understand absolutely everything. Bakshi understood this when he wanted to adapt the movie, telling the Hollywood Reporter that he was incensed when he found out that John Boorman, director of Deliverance, was going to adapt the novel into just one movie:

“For a Tolkien fan, I thought that was the stupidest thing I’d heard in my fuckin’ life. … You can’t squeeze those three books into one picture unless you’re making a Roger Corman film.”

Bakshi’s Lord of The Rings was first intended as a three-part movie, but producers battled him down to two films. They also didn’t want to label the first film as part one, leaving audiences confused when it just ended after the Battle of Helm’s Deep. Bakshi was so incensed by the whole process that he refused to be involved in a sequel, although Rankin/Bass released a musical version of Return of the King in 1980 that had little stylistic similarities. 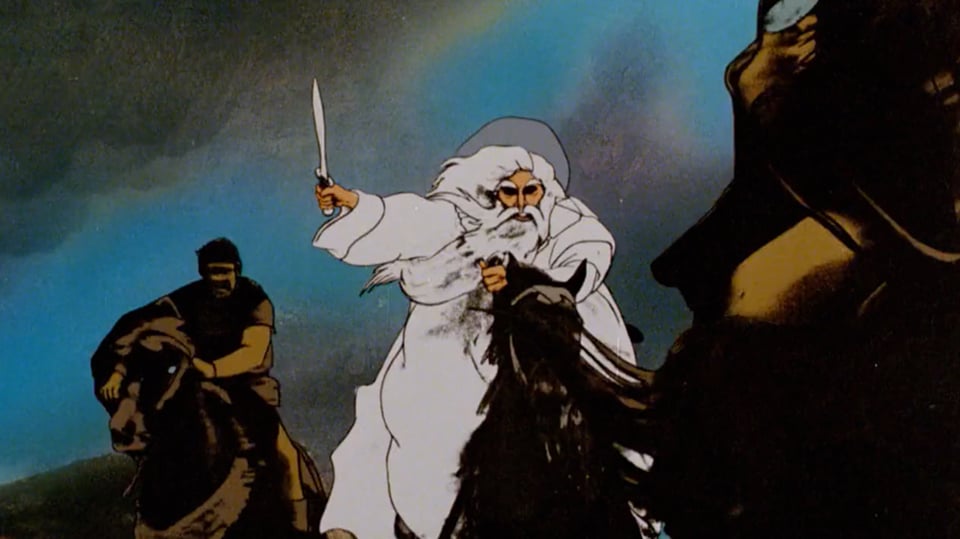 There are some stories that benefit from a brisk runtime. Thrillers, romantic comedies and animated films usually play better when they’re shorter, as themes are so often tied to the storyline itself; keeping the narrative tidy is a great way to make them shine brighter. Unless you’re working from original material, high fantasy epic needs more breathing room. Although it is 132 minutes long, that is an extremely brisk rendition of events considering the source material, making it feel like a barebones recap. The Lord of the Rings rushes through the story of Frodo and the Ring at such a quick pace there is little time to wonder why Boromir is wearing a Viking hat.

What makes the Jackson version such a monumental success is how character motivation is weaved between action scenes in a way that doesn’t drag (one’s personal mileage on the extended editions will vary). Thus, the three main heroes of the story — Aragorn, Gandalf, and Frodo — grow both physically and mentally in order to become capable of saving Middle Earth. In the 1978 film, the three of them only have time to act out the main scenes from the book instead of being fully-fleshed out characters in their own right. They remain cartoons — not people.

Additionally, this past version was simply too faithful to the novel, giving the film little true tension. Peter Jackson made crucial changes in the adaptation — like condensing Gandalf’s absence of seventeen years into seemingly no time at all — in order to increase the high drama needed for a cinematic translation. Bakshi is more faithful to the events of the novel, but what works well on the page translates poorly to the screen, leading to simplistic dialogue scenes instead of moments of gripping action. For example, his conclusion to the events of The Fellowship of the Ring — having the orcs attack after Frodo has already left — gives little drama to these scenes, making his solo departure feel inconsequential. Although Tolkien purists will disagree with me, sometimes changes do need to be made in order to make something work as cinema, especially when dealing with a story of this scope. Television, however, may be able to accommodate a completely fidelitous adaptation, giving Amazon’s attempt yet another good reason to exist. 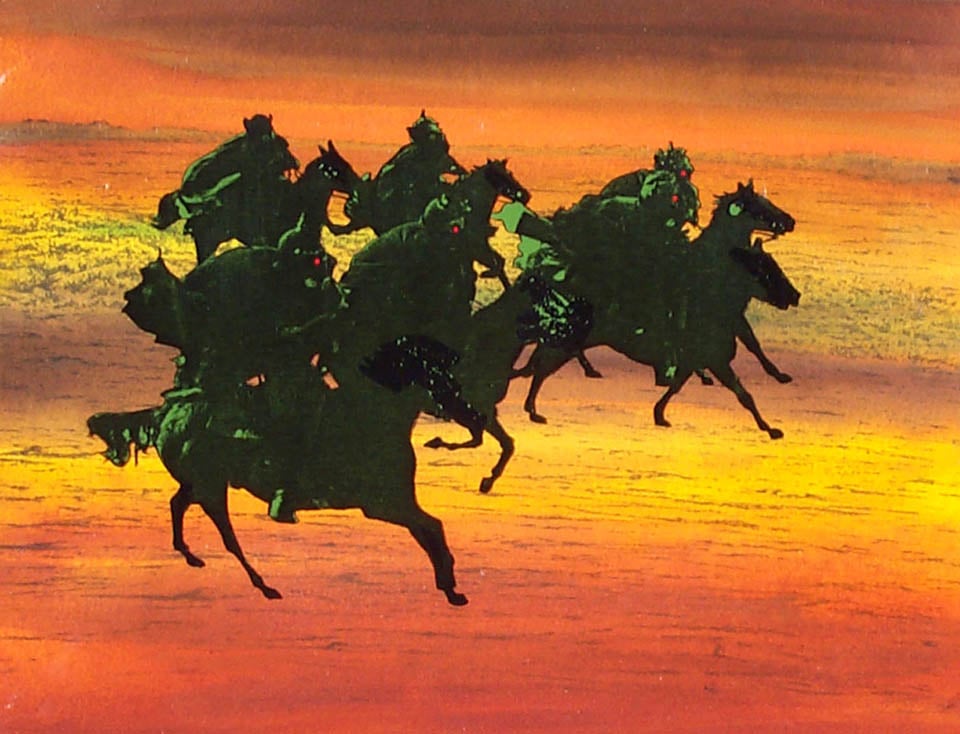 Where 1978’s The Lord of The Rings soars is through its haunting, strange visuals, which couldn’t be more different from Jackson’s. The drastic changes of colour, and the way they saturate the entire screen, call to mind early tinted silent cinema. This is more a Middle Earth of one’s nightmares than a fully transportive place, heavy on Murnau-esque shadow and expressionistic design. For example, Frodo’s horseback escape from the ring-wraiths takes place in an empty desert, the riders tinged in a terrifying otherworldly green. While the editing leaves a lot to be desired in terms of creating tension, this scene is bathed in an ominous atmosphere, giving Frodo’s journey a real sense of danger. In comparison to the Arwen-assisted chase of the Jackson version — where it is obvious that they will get away — here, first-time viewers may not be so sure.

Bakshi was fond of rotoscoping techniques — both to skimp on the budget and to create a realistic sense of action. This was achieved by filming live action and then drawing over it. While it is easy to laugh now at the fact the Fellowship only seem to fight three or four orcs at a time, their movement feels real and the emotional effect is intact. The director would even blend both traditional animation and rotoscoping in the same scene, creating a truly strange cinematic texture. While hardly as seamless as Jackson’s blend of CGI and live action, there is something oddly charming about how delirious this version looks. It coalesces brilliantly in the Battle of Helm’s Deep, with even the high wailing soundtrack chipping in to create a real sense of danger. 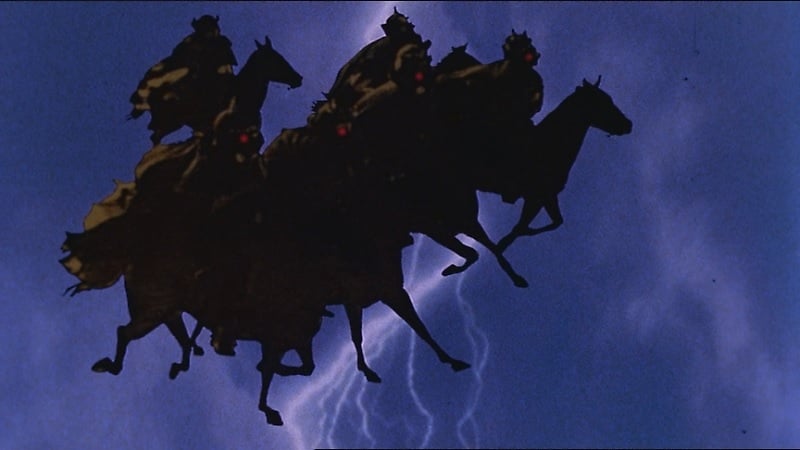 For real LOTR obsessives (and I include myself in this category), having different versions of the same story is a blessing, not a curse. There are many things in Jackson’s adaptation — great though it is — that I would have liked to see, including more songs, Tom Bombadil, and the Scouring of the Shire. Additionally, literature is always open to interpretation, and there is a danger with definitive adaptations in that they lock in how one should envision a book instead of inspiring the use of your own imagination. A television adaptation, which I calculated should encompass at least eight seasons of different lengths*, could be the perfect way to both satiate this childhood desire to see Tom Bombadil in the flesh, and to reimagine the look of Middle Earth anew. One only hopes that they go directly back to the novel itself and not try and ape the look of Jackson’s trilogy. Bakshi’s delirious attempt should prove an inspiration, an example showing that with a little imagination, anything can happen in Middle Earth.

*Season One: The Shire, World-Building

Season Six: Battle for Minas Tirith, Frodo and Sam vs Shelob, Frodo’s capture and Sam having to save him

Season Eight: The Scouring of the Shire