The winter months lend themselves to several things: hot chocolate, massive RPGs, and snuggling up in a warm blanket to watch cozy anime. Though there are some particularly interesting action and romance running this season, there’s just something about the cold that makes shows like Is the Order a Rabbit? shine that much brighter.

The story starts off focusing on Cocoa Hoto as she moves to a large rustic town for high school. Instead of boarding at the school itself, she ends up getting a room at a local cafe called Rabbit House in exchange for working there part-time. It’s here where she first meets the shy yet firm Chino Kafu, the owner’s daughter, and the girlish but suspiciously militaristic Rize Tedeza, who’s also working there part-time.

These three are the core of what eventually grows to be one of the most lovable groups of friends I’ve seen in an anime. Though they often find themselves in typical slice of life scenarios, their personalities mesh so well together that the show rarely feels like run-of-the-mill SoL. Instead, while quite cutesy and typical in design, each of the girls ends up feeling like they play a necessary role.

Cocoa’s happy-go-lucky attitude and obsession with having Chino think of her as a big sister could’ve just been endearing, for instance, but it’s also hilarious given Chino’s consistently unamused rejections. The slightly older Rize exudes a cool, calm, militaristic persona at first, but she secretly loves praise and can’t help but wear her emotions on her sleeve. As more girls gradually come into the picture, it’s obvious that series writer Kazuyuki Fudeyasu painstakingly created each character with the intention of furthering the cozy group dynamic. The ways motherlike Chiya Ujimatsu and Rize-obsessed Sharo Kirima are introduced feel incredibly natural. 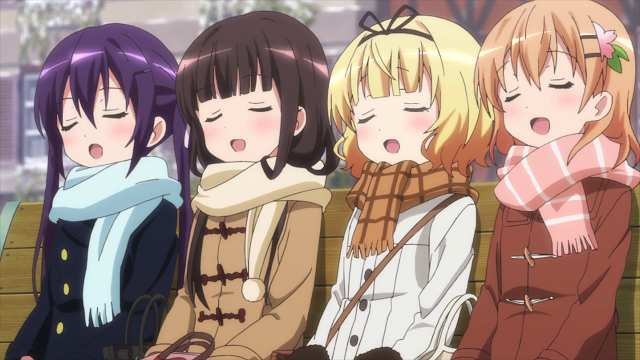 The Cozy and the Magical

This isn’t to dispute the fact that this is, by all accounts, an aesthetic anime. Rabbit exudes a supremely warm art direction that can’t help but make viewers feel at ease. The deep browns of the ever-present cafe backdrop and delicate tones of the characters and their outfits inspires–strange as it might sound–a feeling of safety. The soft color palette also gives the environments a slightly otherworldly aura, something that’s gradually built upon throughout the show.

Rabbit House’s namesake and Chino’s pet rabbit, Tippy, inexplicably talks in a gruff male voice (something Chino hurriedly claims is ventriloquism). Not quite as strange but still questionable is the fact that Rize, a high schooler, casually carries around a firearm and offhandedly speaks of military missions and tactics. These things (along with other strange facets of the world) never take themselves too seriously, and are better for it. 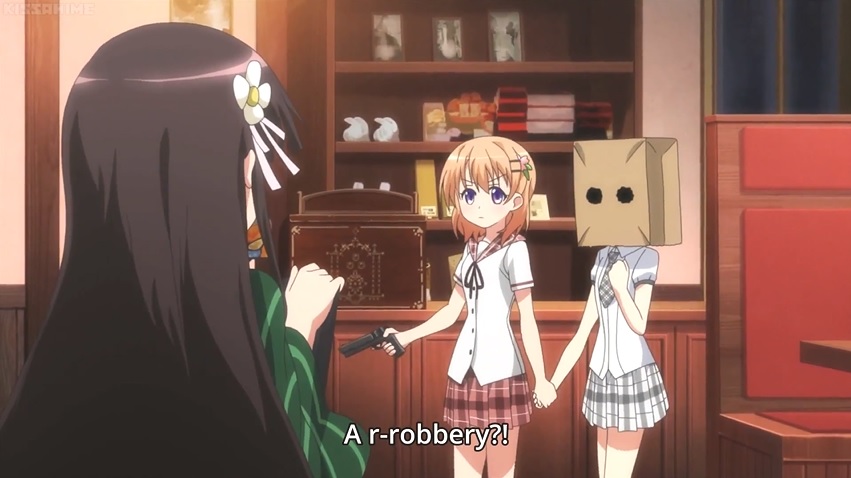 What keeps the viewer coming back even more than the passive company and coziness Rabbit provides is its sharp writing and genuinely hilarious bits of physical comedy. Some of these moments originate from silly character traits (like Syaro’s irrational fear of rabbits), but gradually develop over the course of the season into laugh-out-loud payoffs. Others (like the infamous pancake scene) simply nail comedic timing. You know an anime is special when it makes you laugh at its characters as much as it makes you adore them, and this one is no exception.

You owe it to yourself to give Is the Order a Rabbit? a watch this holiday season. It serves as a pleasant contrast to more bombastic, over-the-top SoL anime. As with most shows in the genre, the real draw here is the charmingly-realized cast of characters. What might be easy to sweep aside as “moe trash” at first glance manages to surprise with tight comedic writing, simple yet delightful misadventures and an unexpected amount of character development. With the recent announcements of a second OVA premiering in 2019 and the long-awaited third season coming in 2020, there’s never been a better time to snuggle up and enjoy the wholesomeness.

You can watch Is the Order a Rabbit? on Crunchyroll here.