As she lies on the stone-cold ground, unable to move a muscle, the air she exhales slowly turns to a visible vapour. The cold she feels is not a natural cold — it is a cold from within her body that cannot be warmed with any fire, no amount of fur coats or plush duvets. Very slowly, a red velvet line seeps from her nose and into the dark depths of the labyrinth beneath her. Her beautiful brown eyes begin to lose their youthful translucence, and the dullness in its stead signifies her life ebbing steadily away.

This is how Guillermo del Toro’s Pan’s Labyrinth begins. When someone says ‘fantasy,’ what’s usually imagined is a Disney film or some form of mystical land filled with fairies and princesses. That is what makes Pan’s Labyrinth such an enthralling enigma: it has all of the common elements of fantasy, while also retaining an ominous and disquieting tone – quite the opposite of the genre that this film has revolutionised.

Del Toro set out to tell the parable of gaining maturity through strife by setting the film in the midst of the Francoist era after the Spanish Civil War. The protagonist is the essential component of any fantasy film: a young, naïve girl whose mind is far more open than those of the adults surrounding her. The basic premise of the film is somewhat standard fantasy-fare: Ofelia is told by a magical faun that she is a princess in another land, and must complete three tasks to prove that she is worthy of ruling this magical kingdom.

The fact that del Toro chooses to let the audience know that Ofelia will die from the very beginning of the film is an ingenious means of emotional manipulation. Seeing her die, and then seeing her reservedly sweet demeanour only a few seconds later when we’re transported to the past, automatically connects the audience to the main character, and the fact that we know her fate fills us with dread and heartache that lasts throughout the film. 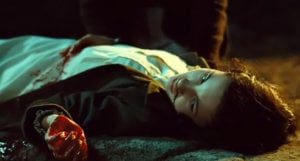 Ofelia’s violent and sadistic step-father, Captain Vidal, is the quintessential image of the evil stepparent, but this villain is far more dangerous than the Disney counterpart. Del Toro does not hold back when it comes to depicting Vidal’s sadism, and it is most often his actions that make the story as dark as it is. Ironically, it is he who opens the world of fantasy to Ofelia by moving her and her mother to a secluded headquarters in the woods not far from where Ofelia finds the labyrinth.

Another requirement of the fantasy genre is the ‘guide’ — a fairy-godmother or knowledgeable side-kick. In this case, the title faun plays an essential role in  guiding Ofelia through her journey of self-discovery. However, as the film progresses, it is evident that the faun is not as benevolent as we might assume at first. Even his appearance is sinister and contributes to the dark tone underpinning the film. 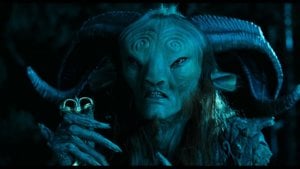 The plot takes place on three levels: the real world, which is too difficult for Ofelia to deal with, the fantasy world through which Ofelia escapes the horrors of her real life, and the symbolism present throughout the film, which links these two world together. Del Toro allows the audience the choice of whether or not to believe the fantasy world is real, but there are various instances that suggest that the fantasy is, in fact, reality (such as the scene in which Ofelia escapes a locked room using magic chalk).

This fantasy world is steeped in Greek mythology. Pan, being the ancient god of nature, is represented through the tree-like horns and moss growing over the faun, and the tasks that Ofelia must complete usually represent some form of mythology as well. Her first mission is to destroy a toad-like monster which is killing a tree (shaped like the horns of the faun) in order to retrieve a key from its guts. The object is linked to reality, as Captain Vidal keeps a similar key to the food rations on his belt.

The second task is reminiscent of the story of Persephone, the daughter of Demeter (goddess of crops and harvests), who was kidnapped by Hades and taken to the underworld. She was warned that if she ate anything during her stay with Hades, she would be bound to him for eternity. When temptation proved too much, Persephone consumed three pomegranate seeds, and thus she was forced to live with Hades in the underworld for six months of every year. Out of despair, Demeter would not allow crops to grow within the six months that her daughter was gone, which is why (according to mythology), we have 4 seasons. Persephone would leave at the beginning of Autumn and return in Spring, when new life is born once again.

For her next undertaking, Ofelia is required to travel into a sort of underworld in order to open a box with the key she had taken from the toad. Upon arrival she finds a cornucopia of food and a dormant ‘Pale Man’ at the head of the table. The Pale Man may be the symbolic interpretation of Captain Vidal, as earlier in the film he is seen at the head of the table with an excess of food before him; opulence in a time when people were starving. Thus, the Pale Man represents Vidal’s gluttony. Once Ofelia unlocks the box, she finds a dagger representing a knife that one of the servants hides in her apron in the real world. While on her way back, Ofelia cannot resist eating a grape, as the food looks so enticing. This wakes the Pale Man, and her escape (a door she drew with magical chalk) begins closing. 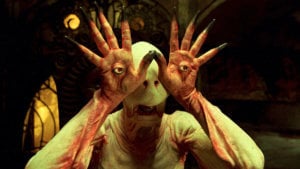 The third task I won’t spoil for you as there is a twist in the tale.

Clearly, Ofelia’s fantasy is directly linked to her reality through the symbolic items she must retrieve. With each trial, Ofelia matures more and more. She learns of the brutality of men, as well as the dangers of blindly following a guide with dubious intentions. Her final act of sacrifice is the ultimate symbol of her maturity throughout the film, as self-sacrifice for the good of another is a concept too foreign for any other character — real or fantasy — to grasp in this story.

Yes, Ofelia uses escapism in the form of her fantastical journey, but she find that dishonesty, violence, and evil are universal. Del Toro wants his audience to realise that even the most intricately-constructed fantasy world is nothing but a reflection of reality. However, if we were to live in a perfect fantasy, we would never learn to deal with strife or fear. Pan’s Labyrinth is about a girl conquering her fears, gaining self-confidence, and learning the ultimate exemplification of empathy. More than anything, it is about learning to grow up.

‘Moonlight’ is the Most Deserving Best Picture Winner in Years