You can never really trust an actor when they announce their retirement, but if Robert Redford is to be believed, The Old Man & the Gun will be his final performance. He hasn’t ruled out directing future films, but this may be the last we’ll ever see on screen of his roguish good looks and tousled golden hair. As for the movie: it’s undoubtedly the least adventurous film David Lowery (Ain’t Them Bodies Saints, A Ghost Story) has ever directed. And yet. . . it’s the beneficiary of a breezy charm and genuine warmth that can warm even the most cynical of viewers. Lowery has made a delicately lovely film, a small work of art that pays homage to the great cinematic leaps of the 1970s and early ‘80s. But more than anything else, it’s a love letter to Redford.

The Old Man & the Gun is loosely based on a 2003 New Yorker article by David Grann (author of The Lost City of Z and Killers of the Flower Moon). The film stars Redford as Forrest Tucker, a man mysteriously drawn to robbing banks, a compulsion that seems to have lasted most of his life. Tucker (often aided by his co-conspirators, played by Danny Glover and Tom Waits) uses his boundless charm and a revolver (which may not even be loaded) to coerce tellers into handing over the dough. As one poor teller recounts, the robber was “sort of a gentleman.” Tucker starts by showing off the gun, then quite calmly and politely waits for the money (never a huge amount) to be collected. During one robbery, he comforts a visibly upset woman, even as he’s in the process of emptying out her register.

The band of elderly robbers come to the attention of Detective John Hunt (Lowery regular Casey Affleck) when Tucker robs a bank so discreetly that Hunt doesn’t even notice — despite being in line with his daughters to make a transaction. Affleck is excellent in his role as a weary detective; the job has turned into a grind, but his new pursuit of Tucker invigorates him. It’s not even clear that he wants to catch him — it’s more fun to keep searching. 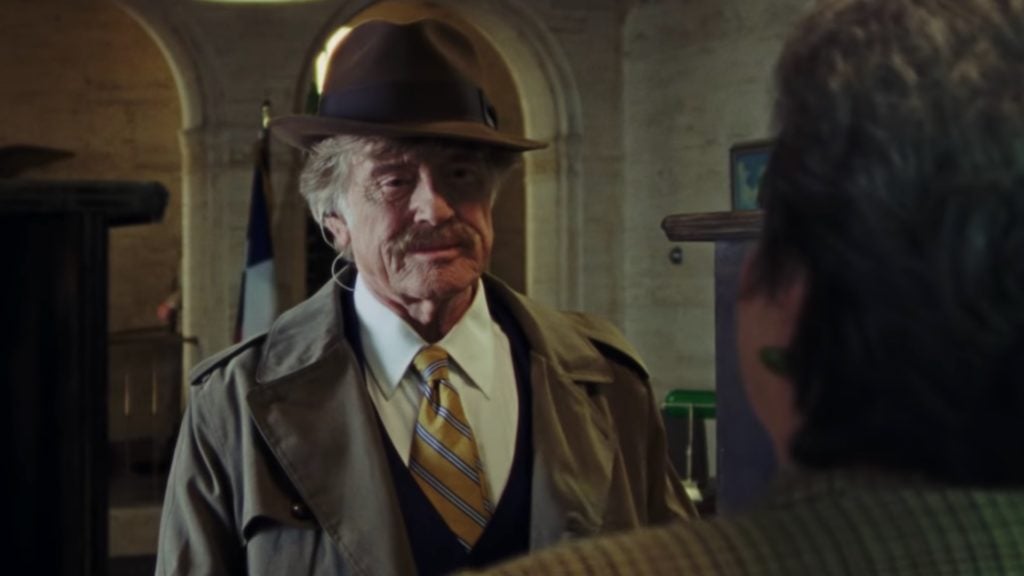 Tucker, whose life seems to revolve around little beyond his criminal activity, finds himself attracted to a woman he meets named Jewel (Sissy Spacek). She lives alone on a farm that’s too big for her, especially after her children have moved away. The payments are more than she can easily make, but she soldiers on, not wanting to give up something she has become so attached to. Redford and Spacek are quite moving in their slowly-building relationship, which is neither too hot and heavy nor unrealistically chaste. It’s surprising to see that these two titans of ‘70s cinema had never acted with each other prior to The Old Man & the Gun; they slip into the roles as if they’ve always known each other.

It’s a pleasure watching Redford doing what he does best on screen for one final time.

The version of the film that Lowery presents is far from Grann’s original article. The real-life Tucker was a much darker character, and his story involved seedier crimes (even murder). Lowery’s goal isn’t to make a work of history, or biography, but to make a film reminiscent of the great films of the ‘70s and ‘80s that he grew up on. To that end, the movie is shot on 16mm film, giving it a pleasantly grainy image. Nothing looks particularly sharp, which creates the sense that the movie has been moldering away in a forgotten film canister before its triumphant rediscovery. 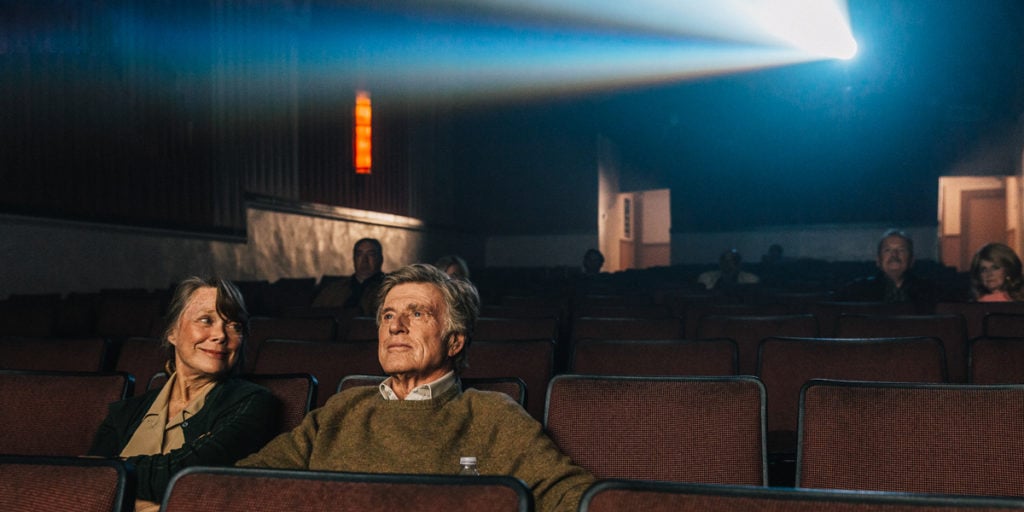 The film excels in nearly every aspect, but it’s Redford who steals the show. At 82, he’s as charming as ever. But there’s also something unexplained about him that tantalizes us. It’s clear that his bank robberies are almost compulsive — he practically sweats when passing a bank after pledging to give up the game. And yet he returns to his pastime again and again. In a playful montage from childhood to old age (including a clip of a young Redford in Arthur Penn’s The Chase), we see the many times Tucker has been incarcerated and subsequently broken out. But we don’t find out what drives this compulsion, nor how he grapples with it. This absence of easy answers is in line with Lowery’s homages; the ‘70s films he emulates often took old hat stories but told them using flawed or mysterious characters that wouldn’t have fit in Golden Age Hollywood. Redford’s Tucker is easy to like, but hard to understand, putting him in line with the protagonists Lowery admires.

The Old Man & the Gun lacks some of the spontaneity and excitement of Ain’t Them Bodies Saints, and its more moving moments don’t have the tragic sweep of A Ghost Story, yet Lowery still manages to pull off a supremely enjoyable film. It’s a pleasure watching Redford doing what he does best on screen for one final time. In the aftermath of one of Redford’s robberies, a bank teller can’t remember much about his face — except that he was smiling the whole time. While watching The Old Man & the Gun there’s a good chance a similar smile will start to creep across your face.