It’s too inexact (and politically fraught) to compare Jake Hannaford, the unraveling fictional director at the center of The Other Side of the Wind, with the very real Steve Bannon, the subject of Errol Morris’ American Dharma. Yet the aggrieved men do happen to share certain qualities, from self-delusion and narcissism to fraying grasp on their ideology. Both of them exist at the center of films that are, to significant degree, about the power of cinema to embolden and destroy its creators—and to delude its beholders.

The Other Side of the Wind

The Other Side of the Wind, the notorious fifteen-year passion project that Orson Welles remained unable to finish until his dying day, arrives on Netflix this November. After forty years existing as a tantalizing hypothetical for cinephiles, and with the help of The Hurt Locker editor Bob Murawski and Welles confidant Peter Bogdanovich, the film has at last been cobbled together from a Welles’ mass of raw footage. The result of that cobbling is a frenetic and jazzy affair, owing to a breezy score by the renowned Michel Legrand, and to a prevailing sense of improvisational editing at play. 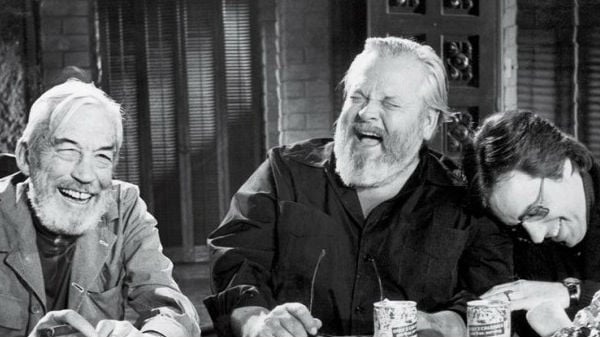 Welles’ last effort takes place at the 70th birthday party of Hannaford (John Huston), where the director is to screen an unfinished print of his comeback film (also titled The Other Side of the Wind). These scenes are populated by dozens of characters based on Hollywood types (and specific people in some cases) who flock around Hannaford like debris pulled into his gravitational field, or pilot fish latched to him. They trade barbs and witticisms with the grouchy director and with one another, and the film rarely establishes the parameters of the physical space they occupy. Faces fill the screen, one after another, delivering line after line—many acerbic, and hinting at Welles’ own disillusionment with Hollywood.

The effect of this editing style is both disorienting and hypnotic, and the chaotic chatter at Hannaford’s party threatens to overwhelm the ostensibly central story of the director attempt at a Hollywood comeback. Only the layered relationship between Hannaford and his protégé Brooks Otterlay (Bogdanovich, playing a fictionalized version of himself) supplies an emotional foothold amidst the drunken rabble at Hannaford’s house. Otterlay, we learn, has supplanted his mentor as a Hollywood’s “it” director; as a result, Hannaford, once a paternal figure, is barely withholding open resentment toward his erstwhile protégé. In his conversations with Otterlay, The Other Side of the Wind, reveals the ugliest bits of Hannaford. He alternates between bluster and bitterness—between arrogant entitlement and self-pity. Huston plays the role with a snarling, unbalanced effect, homing on Hannaford’s inability to adapt to a world that has moved on from him. The result is startling, and exciting, to behold. 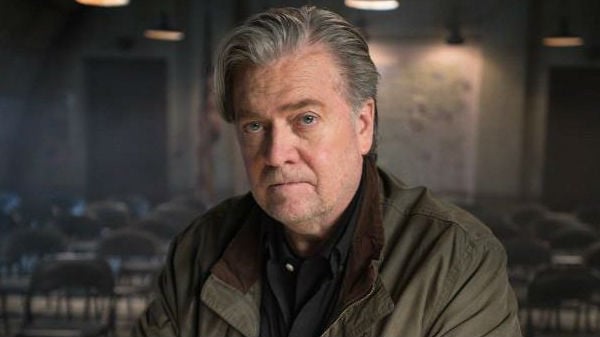 Less exciting to behold, and perhaps more startling, is Errol Morris’s urgent portrait of Stephen Bannon, architect of Trump-ism and proud internet provocateur, in American Dharma. Morris, without ever antagonizing or truly confronting his controversial subject, is able to highlight the fallacious, self-reinforcing nature of Bannon’s worldview—or, as the man himself says, his “dharma.”

Morris allows his documentary to unfold as an intimate, mostly convivial conversation between he and his subject. They chat about Bannon’s favorite movies, which are predictably macho and act as connective tissue throughout the film: Bannon extolls the virtue of Twelve O’ Clock High, before comparing his role as Trump campaign manager to Gregory Peck’s heroic general in the film; later, he squirms while explaining why his own White House ouster is utterly unlike Falstaff’s similar ending in Chimes at Midnight (those paying attention would hard-pressed to agree with Bannon, even if they sympathized with him). In all of his filmic comparisons, Bannon is the hero—the beacon of nobility, beset on all sides by weak, corrupted men. American Dharma immediately homes in on his need to envision his intentions as pure, his ideology unassailable. Morris, for his part, floods the screen with headlines and news clips which attest to the fact that for many Americans, Bannon is, in fact, a grotesque villain.

While the visuals that accompany Bannon’s impassioned rhetoric supply what polemic exists in American Dharma, Morris resists engaging in a debate with Bannon. The latter is allowed to speak ad nauseum on pet issues ranging from economic populism to the decaying ethnic identity of America. While some audience members might wish for Morris to point out, perhaps, that Bannon’s brand of economic populism is starkly inconsistent with tax-breaks overwhelmingly beneficial to America’s richest citizens, no such “gotcha!” occurs. What would be the point? Morris remains the wily documentarian, allowing his subject the opportunity to expose his own façade, never more disturbingly than when he couples Bannon’s glib dismissal of White Nationalism with heart-rending footage of last year’s riots in Charlottesville. 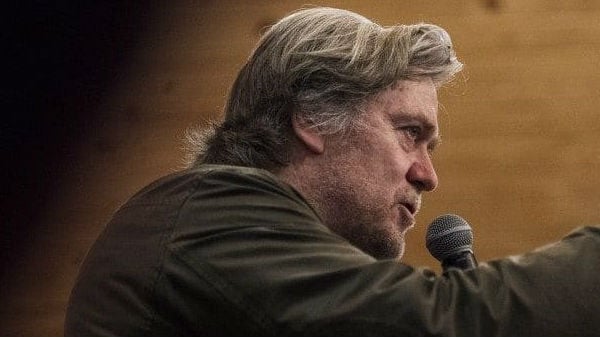 Pointedly, Morris steers the conversation toward Bannon’s own attempt to break into Hollywood as a filmmaker, an effort that resulted in a handful of little-seen, highly editorialized films which screened at niche, right-wing film festivals. By abstaining from a direct interrogation of Bannon’s ideals, and allowing his interview to unfold against the backdrop of cinema, Morris unearths the faint impression of another man beneath Bannon’s smugly satisfied, bombastic outer shell. While obsessively recounting his favorite films, and wistfully recalling his own overlooked creations, Bannon loos like a man rejected by Hollywood’s arbiters of taster, and forced to play the hero in his own apocalyptic vision.

Bannon confesses such a vision with very little coaxing. Morris’ reluctance to score points against his subject will undoubtedly garner scorn from the American left, but what he reveals in lieu of such cheap satisfaction is far more urgent and unsettling. Bannon repeatedly assures of an impending revolution in the United States, never bothering to pretend such an event would be less than violent and cataclysmic. In such moments, Morris fills the screen with images of flaming flags and decrepit buildings, finally allowing the visuals of American Dharma to align with Bannon’s words. Bannon’s silver-screen icons are men with a mission—he calls it a “Dharma”, some ineffable mixture of duty and destiny—and Bannon seems to envision his own Dharma as ushering in such a revolution. Should he watch The Other Side of the Wind, Bannon would surely miss how like Jake Hannaford he is: often incoherent, imposingly brutish, and driven to drastic measure by a worldview informed by the lasting sting of rejection.