Ogami, one half of the odd-couple detective pairing in The Blood of Wolves, is a familiar figure. He has leathery skin, unkempt hair, and a casual, rumpled sartorial sense. His movements are flowing, inelegant but somehow graceful. He hunches and saunters, but with a swagger, as if beaten down by a hard life of which he enjoyed each minute. Obsessive and driven, Ogami (Called “Gami”) is what Vincent Hanna, Al Pacino’s Heat detective, would have looked like if portrayed by the Pacino of 2018.

Gami is a veteran Gangland detective who controls Yakuza violence in Hiroshima city by inserting himself in their universe. He dines with the Odani-Gumi, one of Hiroshima cities crime syndicates; he chooses sides in conflicts, blackmails some gangsters for information, and accepts payments from others. Predictably, given the debt The Blood of Wolves owes to the Yakuza genre as a whole and to countless modern crime dramas, Ogami’s detective partner, Haiko, is his diametric opposite — young and idealistic, beholden to the letter of the law. Throughout much of Blood of Wolves, the tension between the two detectives overshadows a brewing gang war in Hiroshima city. The considerable tension between their clashing personalities heightens once the film reveals Haiko’s hidden agenda: he is reporting on Ogami’s movements to police headquarters.

While Haiko informs on his veteran partner, a byzantine bloody conflict begins to unfold between Yakuza sects in Hiroshima. The Kakomura-Gumi and the Odani-Gumi, we learn, have coexisted peacefully since a violent outbreak between the Odani-Gumi and a third family, the Irako-Kai, was quelled fourteen years ago. In the years since, the Irako-Kai have been largely exiled, but the reappearance of their cunning boss explains the suddenly ratcheting tension between the Kakomura and Odani gangs. The conflicts here can be a bit hard to follow, particularly because Gami acts as a wild card. He is constantly installing machinations within the three gangs — sometimes he brokers deals, other times he incites violence — but his overall plan is obscured to us, his clever insights surfacing only in the film’s climax.

A disproportionate amount of The Blood of Wolves rests upon the performance of Koji Yakusho, and his note-perfect portrayal of Gami. 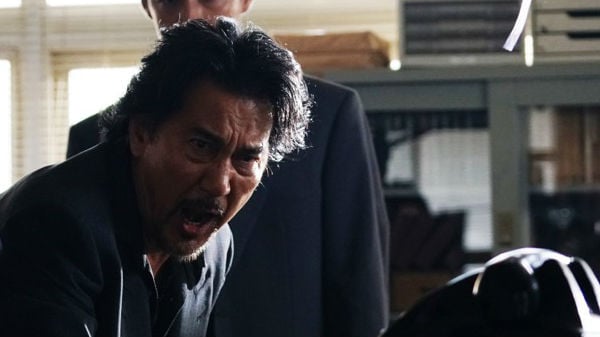 The Blood of Wolves occasionally bears the appearance of historical account, especially when dry voice-overs outline for us the past of the principle gangs in the film. But while it positions Gami and Haiko historically (the film is set in 1988, not coincidentally right before strict legislation was enacted against Yakuza), The Blood of Wolves is most compelling as a profile of each man. Early on, neither are who they seem to be, and The Blood of Wolves knows exactly the nuggets of information to withhold in order to maximize both shock and emotional impact in its climactic moments.

To be clearer, it’s plain that Haiko is hiding something from Gami. We see him in meetings at HQ, reporting to an officer who is overly obsessed with a diary that Gami is rumored to have — one that outlines the loose-cannon detective’s dealings with Hiroshima gangsters. As the film wears on, it cleverly alters our perception of Gami, enlisting us as Internal Affairs detectives alongside Haiko. For a time, he appears more wholesome than Haiko seems to believe. He batters gangsters and lies his way past pesky procedural hiccups like warrants, of course, but he hardly seems malevolent. Then whispers start to emerge, from Yakuza and fellow cops alike, suggesting that maybe Gami crossed the kind of proverbial line fourteen years ago that cannot be uncrossed. Finally, the film reveals to us the truth of Gami’s past, the facts behind certain shocking information about the police department, and the reality of the dynamic between him and the Yakuza. These revelations manage to surprise even though the film has forced us to closely watch Gami all along.

A disproportionate amount of The Blood of Wolves rests upon the performance of Koji Yakusho and his note-perfect portrayal of Gami. The actor’s sleaze-ball charisma softens our immediate appraisal of Gami, and when the film later requires a scarier, unhinged performance, Yakusho delivers — particularly in one gruesome scene in which Gami tortures a gangster by removing some of his…well, pleasure-based body modifications. 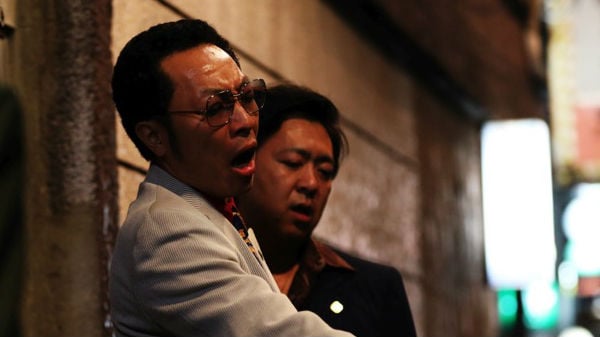 The aforementioned scene, which comes close to genital mutilation, is one of many unflinching portrayals of violence in the film. More than one scene features Yakuza forcing a victim to eat pig shit before dying. There are multiple decapitations in the film. The violence lacks any underlying artfulness, however, any quality that might justify its extremity beyond simply signaling the viciousness of the story’s world. In this way, The Blood of Wolves can be cartoonishly masculine. Even the women in the film exist exclusively as set dressing, victims of violence, or as honeypots in Gami’s various schemes.

Yet while determinedly muscular, The Blood of Wolves aims to be more than mere gangster-porn or Yakuza film homage. The film appraises the line between cop and criminal, and suggests that one cannot effectively police Yakuza without being sullied by their universe. Haiko becomes sympathetic toward Gami, especially once realizing the truth of Gami’s motivation; as the film wears on, he even begins to adapt some of Gami’s tactics. Throughout, The Blood of Wolves is a gritty throwback, which keeps the audience on its toes by obscuring the motivations of its seemingly archetypical detectives. And because the film ends, naturally, in violent cataclysm, it cruelly prevents us from truly knowing either Gami or Haiko until it’s too late.

NYAFF 2018: Sweetness Can’t Solve the Problem of Middle-Age in ‘Men on the Dragon’