The Nintendo Switch will someday support virtual reality “in one form or another” if the company can make the technology comfortable, Nintendo President Tatsumi Kimishima has said in an interview with Nikkei.

It wouldn’t be the first time Nintendo has attempted virtual reality gaming. The infamous Virtual Boy was released in 1995, a calamity larger than the unfortunate Wii U. The system used 1×224 linear arrays equipped with flat, oscillating mirrors to beam a different image to each eye, to create the apparent 3D graphics they claimed to be. Unfortunately, the system caused mass sickness to whoever played it, leaving it Nintendo’s biggest commercial failure.

The Virtual Boy was a disaster.

Ever since the Virtual Boy, Nintendo has become bashful in its attempts to reenter the virtual reality market. However, last year saw Oculus VR launch the Rift, followed a month later by HTC and Valve releasing the Vive. Sony was quick to support virtual reality with the PlayStation VR headset launched in October that year.

Virtual reality is expected to continue growing, with a market worth of $33.9 billion by 2022. As technology develops, the prospects for virtual reality increases, expanding the market further. Nintendo is well positioned to enter the market, provided they’ve learned from the disaster of Virtual Boy. 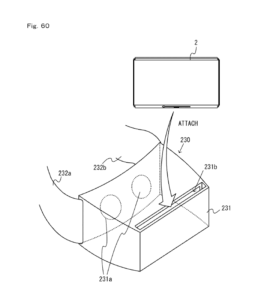 A possible VR accessory for the Nintendo Switch.

It seems Nintendo is already deep into developing the virtual reality aspect of the Nintendo Switch, with some patents filed at the US Patent and Trademark Office. The VR accessory seems to function similarly to Google’s Daydream View Headset or Samsung’s Gear VR; the Switch unit would slide into the top of this hypothetical accessory to form a head-mounted display. The user would view the Switch screen through lenses meant to expand the viewing angle to increase immersion.

The patent suggests that the current design of the Switch includes acceleration and angular velocity sensors, which could be used to calculate the position and movement of the user’s head – a necessity for virtual reality. Due to the Joy-con being wireless, it’ll also be possible for the user to slot the display into this accessory, strap it to their head and use the controllers to play the game.

However, the Nintendo Switch would likely be incapable of powering a stand-alone headset like the PlayStation VR, its Nvidea Tegra series of processors wouldn’t be powerful enough. Considering the Switch’s hardware, the aforementioned peripheral would likely be the only feasible virtual reality solution for the system.

The news of Nintendo reentering the virtual reality market isn’t entirely shocking. Shigeru Miyamoto in 2014 stated Nintendo were working on a new virtual reality console based on the 3DS technology. This is contrary to Reggie Fils-Aime, the President of Nintendo of America, who dismissed the technology in an interview with Polygon at E3 in 2015. 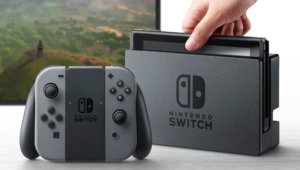 The Nintendo Switch is set to be released next month.

After the Virtual Boy, there is no doubt some discomfort amongst Nintendo in regards to moving into virtual reality. There will certainly be some doubts with the potential consumers of the product. However, Nintendo needs to stay relevant and virtual reality is a growing market to take advantage of. Much like its foray into the mobile which has seen Nintendo end 2016 with profits of $569m (with Pokémon also contributing to the massive success), virtual reality offers a unique chance for Nintendo to capitalize on the potential of the Nintendo Switch.

Nintendo has much experience in the development of motion controls from the success of the Nintendo Wii. Virtual reality isn’t a huge leap from where they began back in 2006, and certainly, the Nintendo Switch has been inspired in part by the Nintendo Wii, notably the Joy-con. Whilst remaining a risky venture, it’s worth noting that much of Nintendo’s biggest achievements have been bold moves into an unforeseen territory and a virtual reality advancement wouldn’t be their most adventurous of moves.