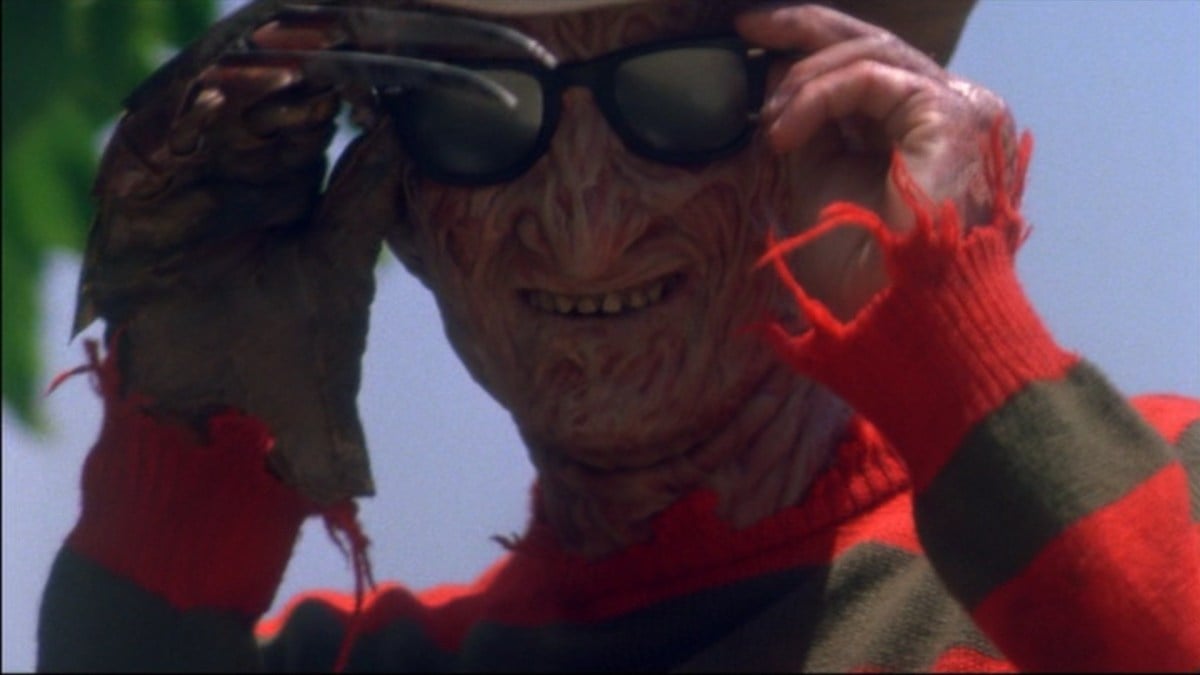 31 Days of Horror: The Dream Master

The first death of the fourth film in the Nightmare on Elm Street Franchise is one of the scariest for me personally because I have an irrational fear of cars. Kincaid, one of the three survivors from the third film wakes up in a scrapyard. Freddy slowly traps Kincaid into a smaller and smaller space by throwing scrap cars at him, fires bursting and metal flying. This scene has some really awesome slasher cinematography, using false POV tracking shots and breaking the 180-degree rule to throw us off until Freddy pops up and finishes Kincaid with a slash to the gut, uttering, “One down, two to go” reminding us that this is just the beginning of this film.

It’s a scene that both freaks me out on a personal level and that I admire on a cinematic level because it doesn’t rely on jumps to scare you, it bombastically throws you off your guard so that when the bang does come, the relief isn’t satisfying or funny, its terror-inducing. And that is the emotional tone of much of this film. The next death (killing Joey, another of the survivors from the Dream Warriors) is a masturbatory fantasy gone wrong, ending with one of the darker lines from Freddie, “How’s this for a wet dream?”

Following that though, we see the real cinematic quality of this film in Kristen’s dream.

Terror Beyond Your Wildest Dreams.

She’s at the beach. She sees a girl making a sandcastle. It is bright and sunny out until Freddy pops out of the sand. In spite of the bright scenery, Freddy’s visage is always shadowed and dark. As he shoved Kristen down into the sand, he puts on sunglasses and cackles. Kristen’s death is shot back in the boiler room, Freddy cackling and taunting her, the cinematography capturing the claustrophobia and stress of the situation until Kristen calls Alice into the scene, expanding Freddy’s power just as he throws her into the furnace. Like the rest of the film, it mixes the camp introduced in Dream Warriors with inescapable darkness. Fighting Freddy is going to be harder than it was in the last film. It’s going to require getting to know Freddy better. And this is when we get this great shot of Freddy as he unveils what happens to all the kids he kills.

The make-up effects are really jarring and provide far more horror than any jump scares that the film has (and it has surprisingly few). The next death has Freddy literally sucking the life out of the virgin nerd character Sheila with more jarring make-up as her life is taken. Freddy kills Rick by fighting him in a martial arts dream and then cheating to win after giving Rick hope. Freddy continues to take people through their dreams and desires and killing. Joey is killed in a wet dream, Kristen at the beach, Sheila through a kiss, Rick through martial arts, again and again, Freddy takes people in ways that are personal and demeaning.

And that is eventually how Freddy is defeated this time. Alice (the titular Dream Master) fights Freddy and kills him in a church (returning to the scene of Freddy’s mother’s rape as revealed in the 3rd film) by having the souls of her friends, trapped inside Freddy, tear him apart from the inside, setting them free simultaneously. The final sequence is heavily stylized, as is the rest of the film. But the scares and action are connected to the theme of power and souls. Unlike so many films from the golden age of the slasher film (particularly the middle incarnations of the Friday the 13th franchise), the graphic nature of these films feels jarring because everything is made personal. These aren’t blank teenage faces, we see the fears they have other than Freddy and the cinematographic element cement this.

This is expanded on even further in the next film, Dream Child which is what we’ll discuss in the last of these posts shortly before Halloween. Freddy isn’t gone for good, and the way they bring him back is easily the most interesting aspect of these films.