Although anthologies have been a mainstay in horror since the birth of the genre, they have seen a revival in the last ten years with films like Trick ‘r Treat, Southbound, V/H/S, ABCs of Death, XX and Tales of Halloween, to name a few. And while some of the more recent entries pale in comparison to such predecessors as Tales from the Crypt and Creepshow, even the weaker ones offer enough minor diversions to have me coming back. Legendary filmmaker Mick Garris is also a huge fan of the genre, spearheading both Masters of Horror and Fear Itself; and now he’s back with a new anthology which made its World Premiere at the Fantasia Film Festival.

Nightmare Cinema brings together a collection of five distinct shorts from five unique filmmakers from around the world. Produced by Cinelou Films and Cranked Up Films and distributed by Cinelou Releasing, Nightmare Cinema includes contributions from Alejandro Brugués (Juan of the Dead, ABCs of Death 2), Joe Dante (Gremlins, Piranha, The Howling), Ryûhei Kitamura (Midnight Meat Train, Versus), David Slade (30 Days of Night, Hard Candy, American Gods) and Mick Garris himself (Hocus Pocus, The Stand, The Shining).

The film follows five unassuming strangers who are individually lured into the old and seedy Rialto Theatre only to have their worst fears brought to life on the big screen by a mysterious projectionist played by Mickey Rourke. The film’s five segments certainly feature an array of subgenres and styles from a cabin-in-the-woods style slasher to a psychological thriller about the perils of plastic surgery – but like most anthology films, some segments are good, and some are not. 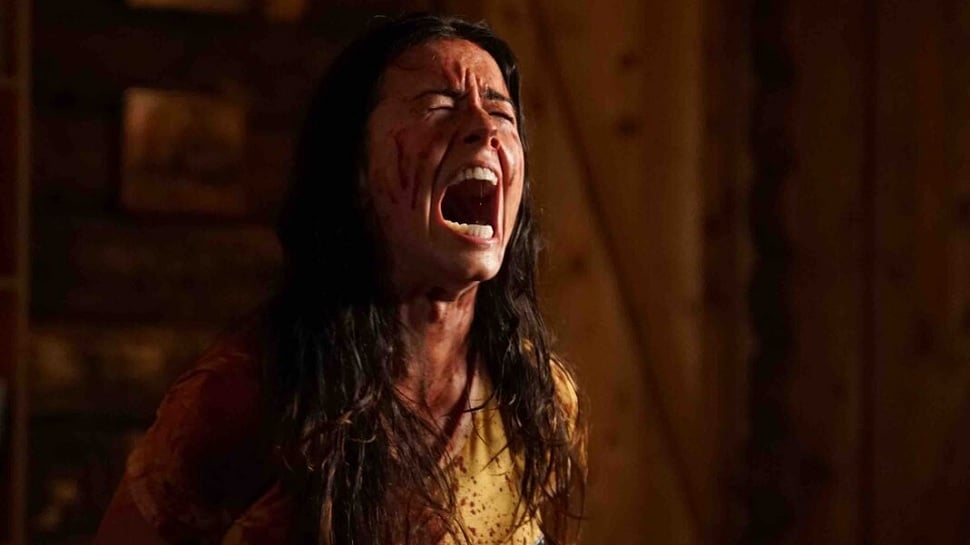 “Thing In The Woods”

The anthology starts off with “Thing in the Woods,” a bloody romp courtesy of Alejandro Brugués. Of the five segments, “Thing in the Woods” is an astonishing meta-feat, capable of being funny, strange, and scary – often at the same time. The segment begins like your typical slasher film with a teenage camp counselor (Sarah Elizabeth Withers) running away from a psychotic killer in welder gear. It’s a set up we’ve seen a hundred times before, but this run-of-the-mill cabin in the woods/slasher flick quickly shifts it into something entirely different by turning the tables in a clever way that allows audiences to root for the masked murderer instead. By the time the ride is over, the short film will change course three or four times, nodding and winking but never losing momentum. If you like bloody, gory, grotesque and twisted movies with a heavy dose of comedy – this is for you! “Thing in the Woods” may not be the best of the five segments, but it is by far the most fun – eliciting just as many chuckles as horrified gasps. It speaks volumes to the talent of Alejandro Brugués that he can seamlessly blend multiple genres together in less than twenty minutes. It’s so good, I only wish it was a bit longer. 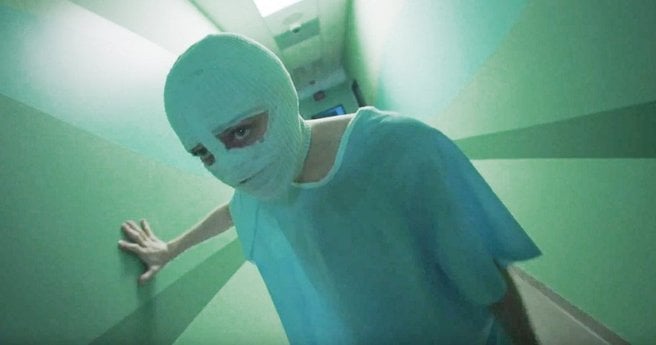 The next short is by far the best, and so it shouldn’t come as a surprise that it was directed by legendary filmmaker Joe Dante. The film features a superb performance by Zarah Mahler, a soon-to-be-bride named Anna who is persuaded by her fiancé (Mark Grossman) to undergo plastic surgery before their wedding day in hopes of removing a noticeably large scar on her left cheek, caused by a car accident when she was two years old. She schedules an appointment with a recommended plastic surgeon Dr. Mirari (Richard Chamberlain), only unfortunately for Anna, the doctor’s definitions of beauty are unconventional, to say the least. From there, things take a rather twisted turn.

For the first half of “Mirari,” Joe Dante masterfully induces discomfort by showing practically nothing, but by the end, you’ll be gripping on to your seat, gasping – and maybe even, rushing to a mirror. Taking inspiration from John Frankenheimer’s masterpiece Seconds, “Mirari” is one of the most disturbing segments of any horror anthology film ever made – perfect for those filmgoers who prefer to watch horror movies while staring at the screen between splayed fingers. 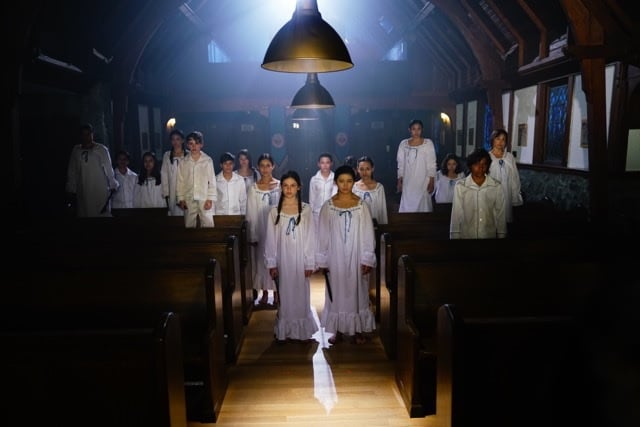 Next on the menu is Ryûhei Kitamura’s “Mashit”, a Catholic horror piece featuring an over the top finale with gratuitous violence, an attempted exorcism and generous amounts of child death at the hands of a samurai-sword-wielding priest named Father Benedict (played by Maurice Benard). Unfortunately, “Mashit” struggles to make much sense and suffers from awkward tonal shifts that make it seem like the director couldn’t decide if he wanted to make a serious film about demonic possession or some sort of parody. Needless to say, just about everything falls flat. 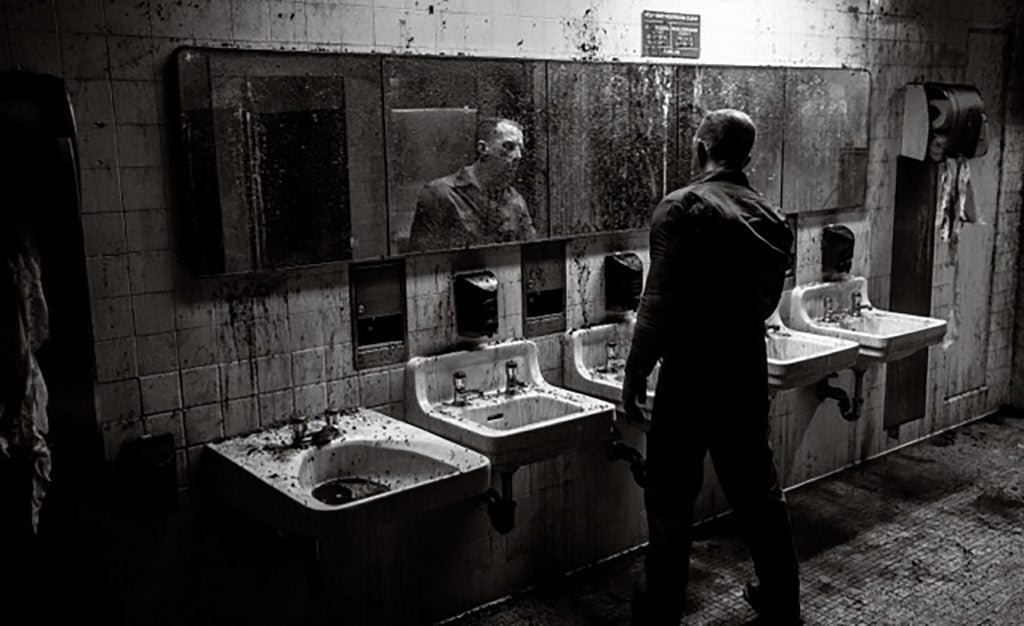 “This Way to Egress”

David Slade’s story thankfully brings the anthology back to life with “The Lure of the Egress,” a downbeat character study that follows a woman trying to function in a world that seems thoroughly alien to her. The short which calls to mind Slade’s Black Mirror episode “Metalhead,” is a dazzling spectacle – shot in stark, monochrome and featuring a standout performance by Elizabeth Reaser who plays a woman in the pang of an apparent mental collapse. Desperate for help, she seeks answers from a psychologist only her trip to the doctor’s office becomes a living hallucinatory nightmare. As Helen desperately tries to keep sane, everything around her, including the humans she interacts with start to become deformed. Meanwhile, her two sons who accompany her, disappear, leaving her wondering if they even existed in the first place. As we suffer through her struggle both we the audience and Helen must decipher what is real and what is not. “The Lure of the Egress,” combines David Lynch’s monochrome industrial landscapes, Cronenberg’s body horror, Polanski’s vision of mental illness while David Slade brings heightened levels of discomfort, conjuring a genuinely unsettling vibe that leaves you at the edge of your seat. 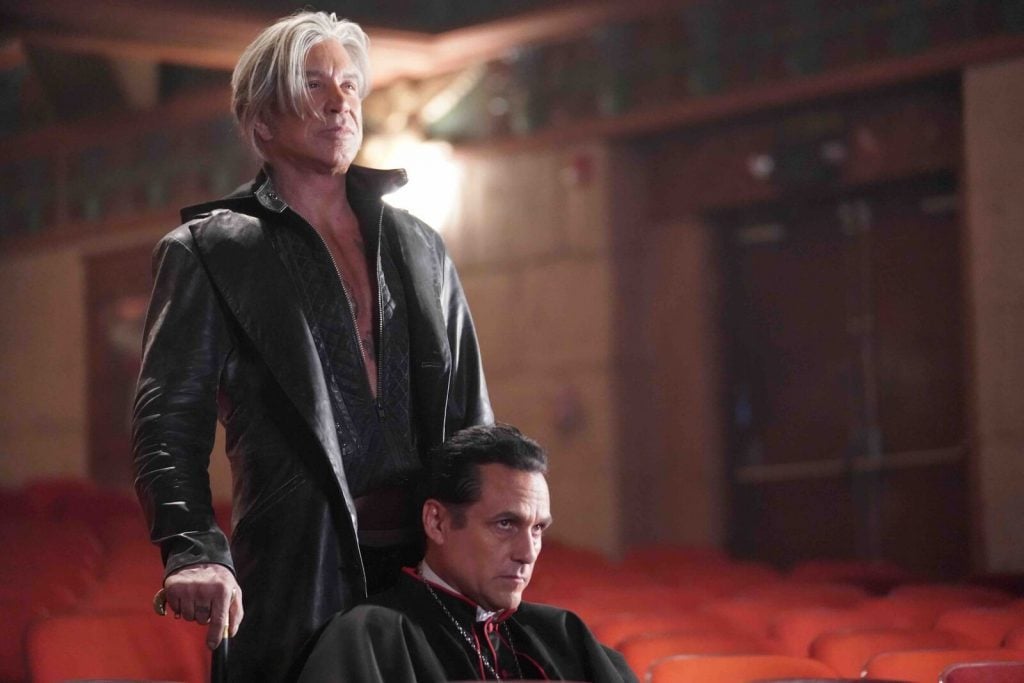 Finally, we arrive at ‘Dead’, a rather restrained ghost story that sadly doesn’t live up to the creativity and intensity of what came before it. Directed by Mick Garris, “Dead” opens with a scene reminiscent of Batman’s origin story in which a young Riley (Faly Rakotohavana) and his parents are attacked on their way home by a crazed man with a gun. As he watches both his parents get murdered, Riley barely escapes death, and after taking a bullet to the chest, he wakes up in the hospital with a newfound gift. Riley can now see and talk to the dead.

While this final vignette brings some real emotion to the film, it is unfortunately plagued with bad effects, terrible dialogue, and is void of any real suspense and genuine thrills. And given the running time of Nightmare Cinema, I can’t help but think the feature would be better without it. 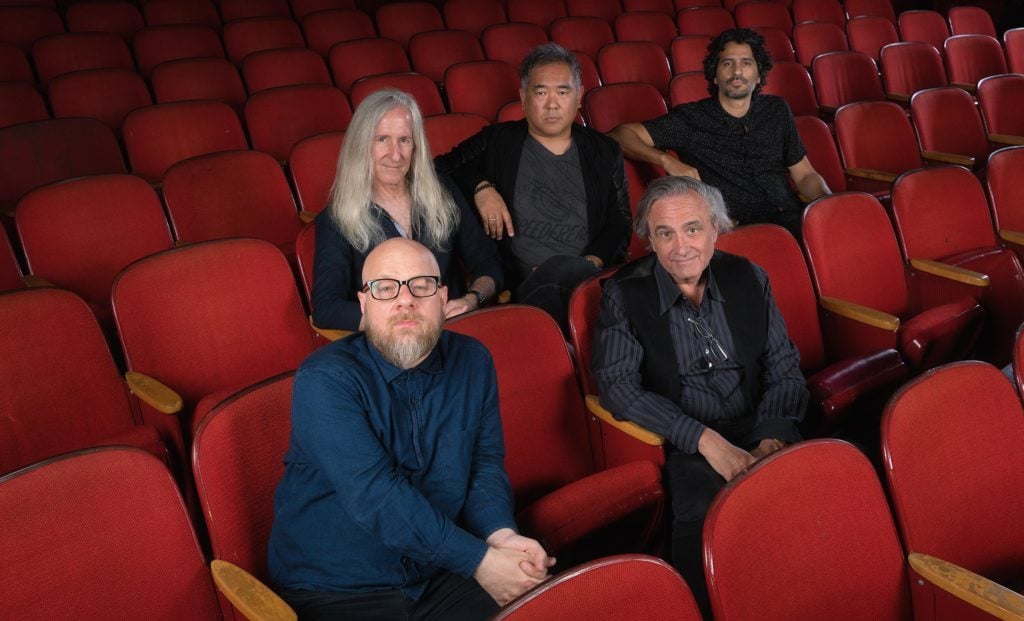 As is the case with all films of this type, your mileage will vary depending on the number of stories that you wind up liking. Regardless, Nightmare Cinema will no doubt be a delight for horror fans, especially for those who have fond memories of the Masters of Horror TV series. And while the quality of the films varies wildly, in the end, Nightmare Cinema is a better-than-average anthology, thanks to ‘The Thing in the Woods’ and ‘This Way to Egress’. It also helps that the wraparound segment takes place in an old movie theatre that also doubles as a gateway to Hell. Not only is it the perfect location for these characters to intersect but Mickey Rourke is the perfect choice to play the ringmaster. And despite some missteps, one could easily see a sequel in the works.