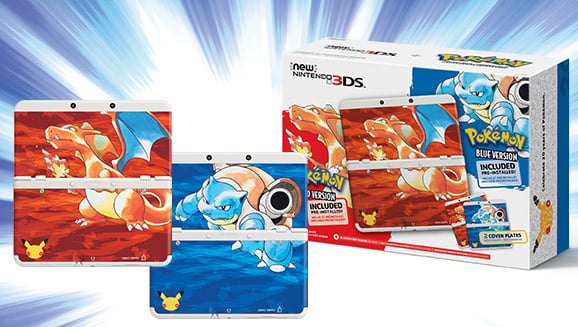 To promote the upcoming Nintendo eShop releases of Pokémon Red, Pokémon Blue, and Pokémon Yellow, the New Nintendo 3DS is getting a special bundle with the first two games pre-installed (no Yellow), as well as having the option for a Red or Blue customized theme, and two face plates depicting artwork from those games’ original Gameboy boxes. This bundle will be available February 27th, to coincide with the games.

This is all part of the The Pokémon Company’s celebration of the 20th anniversary of the Pokémon franchise. The first games were released in 1996 (I did the math), and have captivated fans across the world obsessed with hunting down these poor magical monsters (including our own NXpress Podcast host Tim Maison). In addition to the New 3DS bundle, The Pokémon Company will also will also be releasing a slew of Pokemon movies onto iTunes, Amazon, and Google Play for rent or purchase.

If you still haven’t overdosed on Pokémon, don’t worry. With the impending societal takeover of Pokémon Go, Nintendo’s announced mobile game developed in partnership with Niantic, and rumors of the resurrection of the Pokémon Trading Card game, along with various other events TPC has planned, it looks like fans will kept imprisoned in a Poké Ball of their own making all year.