The First Episode of My Brilliant Friend Shows Immense Promise

Ambitious novel adaptations, like Amazon’s plans to revisit Middle-Earth once again (and in even more detail) need not take place in the world of fantasy. Sometimes an entire world can be found through the perspective of one woman. A new HBO series, in co-production with Italian Networks RAI and TIMvision, has taken on the epic task of adapting Elena Ferrante’s The Neapolitan Novels, an epic project that could be onto something truly great.

The Neapolitan Novels were a sensation when they were first published. Combining a fiercely feminine point of view with a Zola-esque attention to describing life in Naples, the four books chart the lives of two friends, Elena, and Raffaella (often referred to as Lila), from childhood to middle age. Touching on everything from the patriarchy to far-left terrorism to class conflict to the struggles of writing, the four novels are characterized by their anger and transformative level of description. Along with Karl Ove Knausgård’s My Struggle series, a 3600-page tome to one’s own personal inadequacies and anxiety, The Neapolitan Novels were seen as a landmark in the modern development of the novel. Elena Ferrante has famously kept her identity secret, only adding to her mystique, and making her a literary giant equal to similarly secretive men such as Thomas Pynchon and JD Salinger.

Counting Paolo Sorrentino as an executive producer and Ferrante herself as a co-writer, this adaptation has the potential to be one of the most exciting developments in modern television, as arguably the greatest literary work of the 21st century is adapted smack-dab in the middle of the peak television era. “The Dolls,” the first of 32 episodes, is a good indication of that promise — a deep-dive into the harshness of 50s Neapolitan life that simply brims with endless possibilities. For those who have read the novels, there is the thrill of knowing what is to come and how the life of the child already paves the way for the life of the woman, and for those who have not, it nonetheless offers an exploration of childhood and memory in a way that few shows would even dare. While the first episode has a lot of ground to cover and a lot of scenes to set, it promises something grand even in the era of over-saturated television: the complete cinematic mapping of a life. 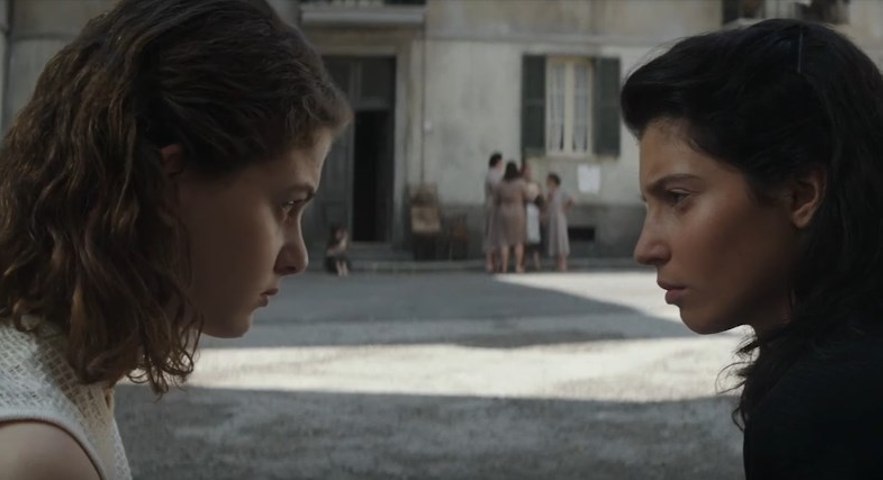 The first season — an adaptation of My Brilliant Friend, the first novel — starts off in 2010, inside middle-aged Elena Greco’s (Elisabetta De Palo) apartment. She is awakened by a phone call; the son of her estranged friend Raffaella has called her up to say that his mother has gone missing. Elena doesn’t know where she is, but like Proust taking a bite out of a madeleine, this reentry of the past into her life prompts her to sit down at her laptop and start writing.

It’s a necessary framing device, as it alerts the viewer to the literary and subjective ambitions of the project — an imagining of Elena’s life and friendship with Lila from Elena’s perspective. The novel still remains the perfect medium for subjectivity, allowing the author to both describe and reflect, to admit one’s own biases and the cloudiness of recollection, as TV or film cannot help but slip into objectivity; it’s the nature of the medium. There are interesting ways around this, either framing everything through the eyes of the protagonist or — in the case of László Nemes’ movies, such as the recent Sunset — blurring everything that the hero doesn’t see. The most common device is voiceover, which is used here both to convey events in the novel which aren’t experienced and to reiterate the fact that these events are coloured by Elena’s own understanding of them. Italian director Saverio Costanzo does a great job in terms of blocking, framing, and choreography; he creates a sense of chaos and confusion that befits the experience of a young girl in 50s Naples navigating the perils of a savage town.

Elena (Elisa del Genio) was born into a violent world she has yet to fully understand. Drenched in patriarchy and unspoken rules, it is a suburb ruled by fear, chaos, and untimely death. Men cheat on their wives and drink their money away, while the women suffer endlessly and blame each other for their misery instead of the guilty men. Sometimes Elena finds the passionate fights between the women — who she says can be vengeful forever while the men forget about it easier — a point of amusement. But there are moments of true horror here that strike fear into the young girl. The best scene so far takes place in a church, when a man who has insulted local kingpin Don Achille (Antonio Pennarella) is dragged out by two henchmen, beaten up, and thrown against a wall. Elena wishes to see what is going on, but her vision is constantly obscured, stressing the subjective nature of what she is seeing.

The savagery and confusion of this expertly thought-through world gives key context to Elena’s relationship with Lila, a passionate girl who has already learned to read and write Italian — as opposed to the Neapolitan language that is spoken in the region. Elena fixes her eyes on Lila from across the classroom, and is immediately smitten. She tells us that she knew from then on that she would follow Lila no matter what happens, for whatever vague way she can understand it; Lila points a way out from the baseness of Elena’s current life. Lila, for one, is not even afraid of Don Achille himself — despite him being the local loan shark, gangster, and embodiment of the patriarchy all rolled into one — a notion conveyed in the episode’s frightening cliffhanger ending.

The first episode of My Brilliant Friend is masterfully and swiftly done in only 50 minutes, avoiding the exhausting “prestige TV” bloat of 70-90 minute pilots. For those who haven’t read the novels, I am loath to give away too many of the conflicts already expressed in this pilot, which expertly set up the complexity of the struggle to come. It’s not quite a perfect episode, and one suspects there is simply too much to do; it cannot quite recreate the magic of the city as I experienced it in my own imagination reading the novels and during my own time that I spent there. Costanzo cuts quickly between women gossiping on balconies with ease, but the courtyards below are often too stagy, and could do with more colour. Yet, these are minor quibbles. With thirty-one episodes to go, it seems that Ferrante’s novel is in good hands. This could be the start of something special.

Looking back at ‘The Legend of Zelda: Ocarina of Time’