There are times when comics go for the long game, setting up every piece perfectly. The mysteries are only revealed a few volumes in, and the protagonists’ falls and rises back to glory take time to develop into fruition. Alliances are made the same way friendships are, with time and effort. With enough patience, the payoff will be astonishing. These thought-provoking epics are always a pleasure to have around. Then there are times comic books are epic in their simplicity, they rock out from the very first issue. That’s where the creators of Extremity, Daniel Warren Johnson and Mike Spicer come in. Their newest book, Murder Falcon, by Skybound publishing, soars off the shelves and wakes up the long-awaited id, nestling comfortably in every reader’s soul, with a primal roar. 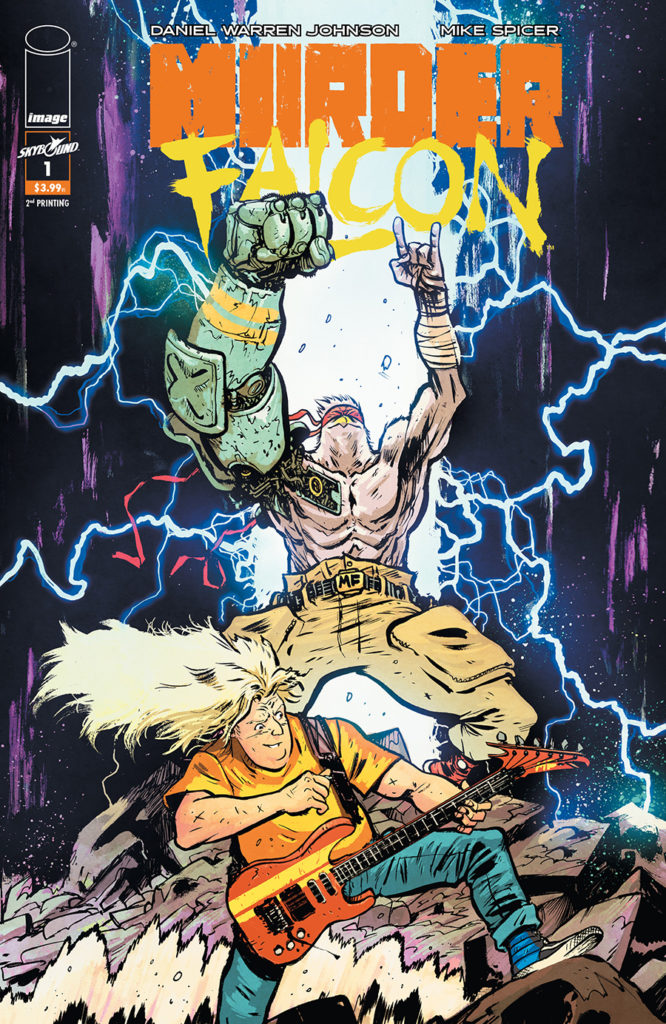 Simply looking at the cover catches the eye. A long-haired blonde rocker is shredding while a musclebound cyborg humanoid falcon sporting cargo pants and a crimson Rambo bandanna pumps his fists into the air. Lightning crackles as a beam of light emits onto the duo knowing full well that they are unstoppable. There’s an old adage about not basing a book on its cover, but this is an exception. Johnson and Spicer bring together a story about loss, love, and hope in a simply fun series. Jake, a musical prodigy, has hit rock bottom. The band broke up, his love life is shattered and worst of all, monsters are attacking Earth. One fateful day, Jake’s life turns for the worse and monster barges through his front door. He picks up his broken guitar, or his ax one might say, and defends himself. Suddenly, his weapon is repaired by awesome, and Murder Falcon emerges from the power of rock. Without delay, he announces he is Jake’s champion and is fueled by the power of ROCK! The harder Jake shreds, the harder Murder Falcon hits. From then on, they have a mission: fight evil and rock out together.

Right off the bat, this book gets straight into the lore with the simplest of expositions. It takes two pages to explain everything. Murder Falcon explains to Jake of the monsters’ origin and asks for Jake’s help. Jake finds it difficult to heed the call, but Murder Falcon encourages him that he’s not only talented, but he’s also kind. Jake accepts his newfound destiny and joins forces to stop evil at any cost. 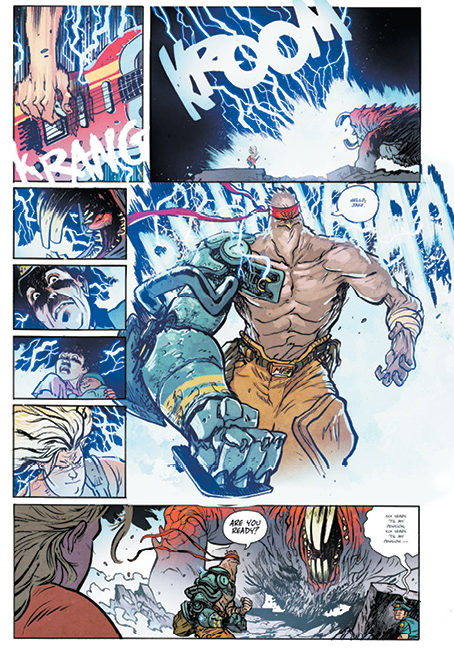 Murder Falcon is called to fight a monster

Murder Falcon is cathartic in every way possible. This gorgeous book purges away all negative emotions and fears with music and punching. Every panel is colourful and chock full of detail and action. It reads like a great Saturday morning cartoon but for an older audience. No page is too over the top for these creations. There was a concern that the panels will be cluttered, and it will be too difficult to distinguish what’s occurring in the comic. After all, it is about a cybernetic humanoid falcon fighting eldritch abominations. Johnson ensures that every sequence of events is simultaneously easy to follow and visually pleasing. He doesn’t overstimulate the reader with too much detail, or hides behind urban destruction. There are also breaks in the action, allowing repose in between epic solos, where Jake ponders about his duty, or reminisces about his past. This gives the reader time to truly appreciate the moment when Murder Falcon uses his megaton-punch robotic right arm to pulverize the next grotesque being into what can be best described as ludicrous giblets.

Just like those Saturday morning cartoons, Murder Falcon promotes the same type of morals. Never lose hope, never let evil win, you are never alone. And punching monsters is awesome! Through the power of art, and never giving up on your passions, anything is possible. Solely based on the first issue, one problem this book can face is it will fly too high too fast. It may not be able to sustain the same amount of metal and epicness in the following books rendering it stagnant, because it lacks that hint of the long game. But, that may not necessarily be undesirable. This book doesn’t need to be 10 volumes, with numerous companion stories.

Daniel Warren Johnson and Mike Spicer’s Murder Falcon is the right amount of fun. With its likable characters and bombastic fight scenes, this story will rock the shelves.

Murder Falcon has been sent back to the presses for a 2nd Print!

Ruins Of The Empire is The True Followup...

Ghosts and More in this Year’s Hellboy Winter...