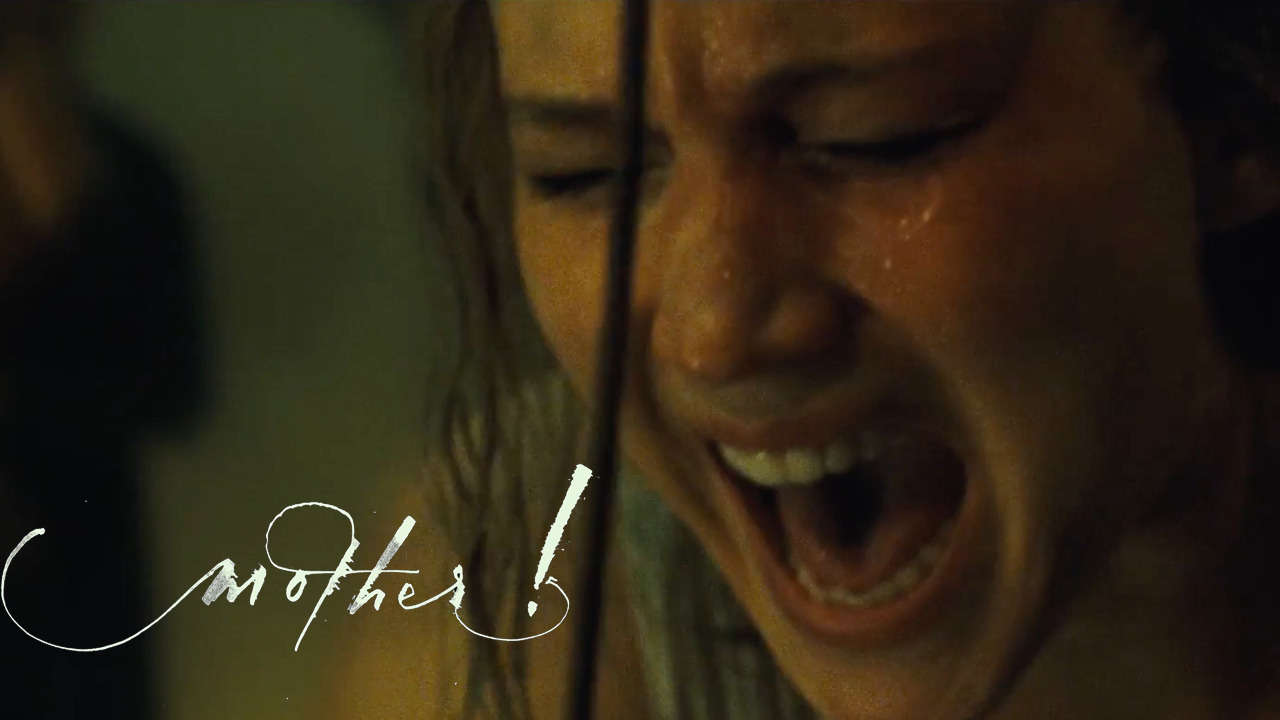 There’s expressing a thought, and there’s bludgeoning audiences over the head with it, over and over until they’re either prone to resist or completely numb. Darren Aronofsky’s mother! is a mad, screaming version of the latter, seeking to slap a dozing audience across the face with an artistic rant seemingly dressed up as some kind of haunted house-style horror film. It will confuse, annoy, and possibly repulse — unless you’re cool with just sitting back and enjoying the kind of skillful passion seldom seen these days in wide release. And what a passion!

Though describing it is nearly pointless, there is a plot to mother! I suppose, involving an unnamed woman (a doe-eyed Jennifer Lawrence) living her version of an idyllic existence, renovating the once-burned countryside home she and her poet husband (Javier Bardem) now share. He is currently experiencing writer’s block, but she is incredibly supportive to his process when not wondering what color to paint the walls; it’s a quaint, quiet life. One night a stranger knocks at their door, and despite his wife’s clear discomfort at the notion, the husband mysteriously invites him to stay the night. This event ignites a chain of events that sees more and more people arrive at the couple’s isolated homestead, first trickling in one by one, then later coming in droves, growing increasingly oblivious and uncaring as to the wishes of the woman, and destroying the peaceful environment she had so purposefully cultivated.

From there on writer/director Darren Aronofsky pours his heart out into a fever dream of a film, dropping bizarre breadcrumb after breadcrumb to bait those willing to follow, and dragging those who aren’t into his personal nightmarish perception of the world. Why does the husband keep letting people in when the multiplying visitors treat the house like a rock star treats a hotel room, weakening the literal beating heart within the walls? Why does he ignore the pleas of his wife, instead bathing in the adulation brought on by their fandom, inspired in his work by their struggles and stories, strangely immune to the selfish, rampant destruction they inflict wherever they go? God help the viewer who thinks there’s a story puzzle to be solved, something that will realistically explain the eerie, alien behavior taking place. Either you roll with the symbolism, or you roll your eyes in exasperation.

If you can manage the former, then there’s a lot of swirling fun to be had with mother! There are loads of ways one could interpret what is being depicted here, layer upon layer of juicy issues vomited forth; Aronofsky bares himself in a way too few do, and it makes for a fascinating one-sided conversation — even if it’s mostly spoken in babbling tongues. The easiest breakdown seems to be that the filmmaker is expanding upon and intensifying world views that bubbled on the surface of his biblical epic, Noah. That mythical beast didn’t look too highly upon humanity, and mother! doesn’t have much nice to say either. One could also home in on the couple’s strained relationship and see a metaphor for marriage, or even detect notes satirizing celebrity worship and religion. It doesn’t matter if any of them are intentional; the sheer possibility contained within its depths make the film a bottomless glass of cinematic nourishment.

Whether or not you like what mother! has to say, or even care, the way the film says it is endearingly honest, a welcome personal stand that attempts to get its point across in ways other than the most obvious. That doesn’t mean that mother! is subtle, however. Aronofsky wields a baseball bat to our brains, bashing them in with his stylistic point of view, one that he belabors again and again via increasingly obvious and graphic demonstrations. People are jerks, and they only get worse, going from simple rudeness to committing acts of illogical atrocity. And yet, it all makes sense, never truly shakes the foundation. This is because steady escalation — not twists — is at the heart of mother!, and the linear structure limits true surprises, even amid the later gleeful chaos. In fact, those perceptive early on to the allegory will almost be able to predict story beat by beat, and the ease of anticipation hurts the immersion.

That one-track mind may result in mother! coming off as a bit tame to those who get the message quickly, but Aronofsky’s virtuoso filmmaking luckily prevents any lasting boredom, artfully ramping up the tension with his camera, and unleashing his fury by staging utter mayhem. Half the film is spent following Jennifer Lawrence around the house, either right up in her face, or over her shoulder as she tries (like us) to understand exactly how her perfect world has unraveled. The tightness of these handheld shots can elicit an edginess; we are rarely able to see as much as we want, and some may find themselves wishing for conventional coverage, if only to breathe a bit from the constant subjection to the same repeated image. Not helping is a drab home (this is paradise?) that contrasts with the vibrant and beautiful natural setting outside, a place we only see in glimpses, and are never allowed to spend any time in. Once he has knotted things up, the director then proceeds to tear it down in swooping madness, cutting back and forth in a barrage of indecipherable actions, rarely giving us time to process anything beyond the basics of the actions presented, a succession of images that spells out his disparaging thesis in blatant terms. Throw your hands in the air to cheer at the roller coaster ride, or give up in exasperation.

There will come a point that most audience members should start to suspect that something weird is going on with mother!, and how they react could be more interesting than what’s actually happening on screen. Nevertheless, the film is bold and demands attention, inspiring discussion like few in recent memory. This is the work of an artist unloading himself upon the unsuspecting world, laid out like dominoes falling — at first only in a single line, then later blooming into a dazzling display, its facets crossing and converging with perfect awesome precision. What actually happens on screen in mother! isn’t as important as what it’s meant to represent, and if audiences attempt to take the “plot” literally, they will only be left confused and pummeled by a sensory assault in the last act that means to insult them, and does not let up.

Is the disdain for coherent storytelling or recognizably human characters a daring choice, or the pretentiousness of a pompous filmmaker gone rogue? Does the script succeed on its own terms, or rely too much on outside knowledge? Does it go too far in its depictions of the cruelty of humanity? I honestly don’t care. Wearing its passionate, bloody heart on its sleeve, mother! is the gift of all gifts for those who love movies: a fountain of cinematic and philosophical conversation wrapped up in skillfully bold genre filmmaking.