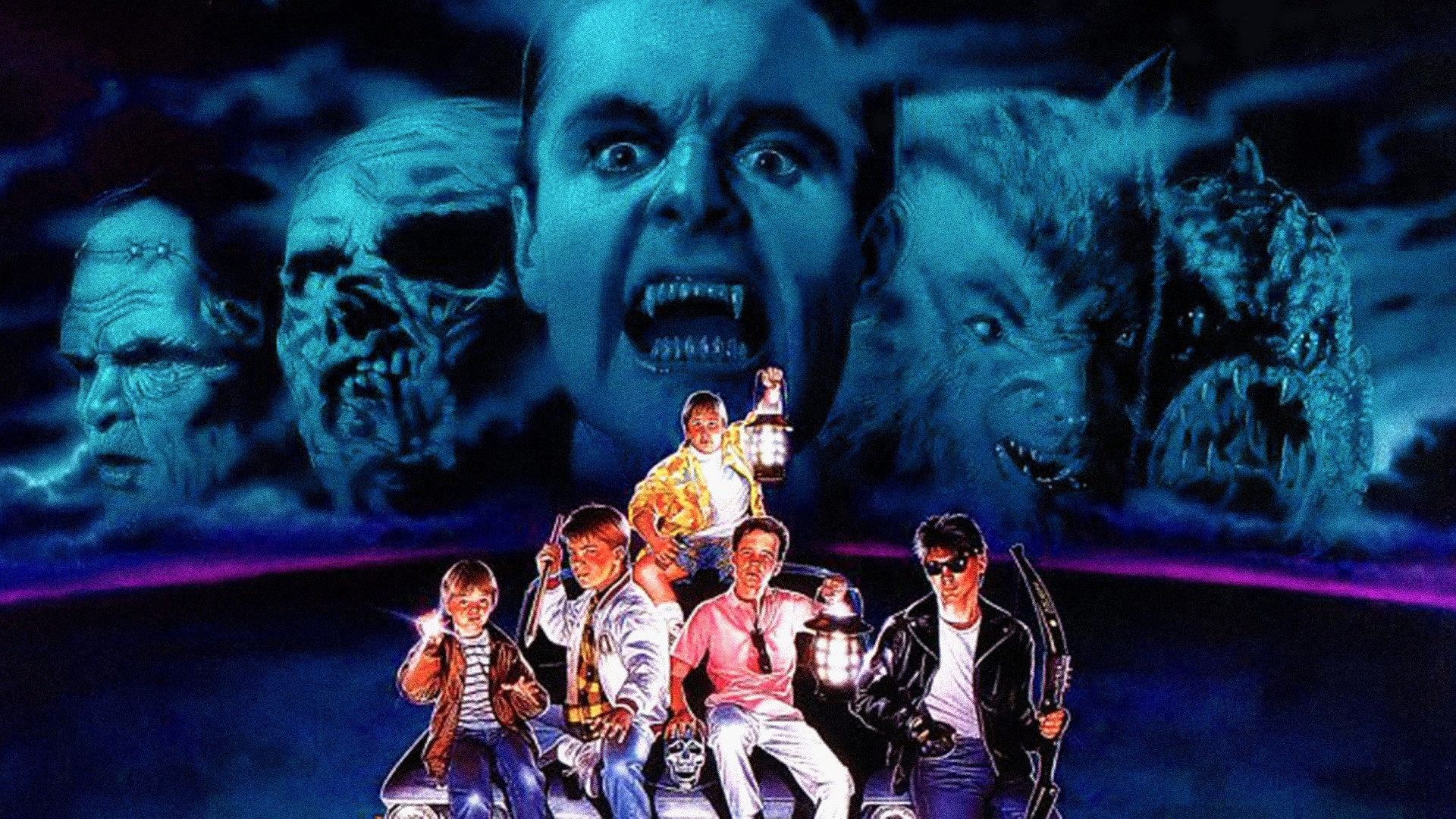 The Monster Squad (1987) is one of the most underrated movies to come out of the 1980s. It has everything that people love about the decade: a group of kids going on adventures, adult humor and dark imagery in a film for children, monsters (with real make up and practical effects), a ton of fun tropes and cliches, and of course 80s pop music. What’s not to love?

Monster Squad brings together every classic Universal Monster and puts them in a modern setting (well, a 1980s modern setting), featuring Count Dracula (Duncan Regehr), the Mummy (Michael MacKay), the Wolf Man (Carl Thibault), Gill-Man (Tom Woodruff Jr.), and Frankenstein’s monster (Tom Noonan). The creatures have a unique design to them because the crew had to change the looks of the Universal Monsters to avoid copyright laws.

The monsters seek a magical amulet that will help them rule the world and plunge it into darkness, and (in typical 80’s fashion) the only thing standing in their way is a savvy group of pre-teens. Led by the protagonist, Sean (Anrew Gower), the Monster Squad is a club for neighborhood kids to talk about the classic monsters and horror movies that they love. They are so obsessed with monsters that they often spend their time drawing pictures of monsters for their clubhouse during class. The film really doesn’t take itself seriously and shouldn’t be watched with the intention to take the movie apart. It is the very definition of a popcorn movie, targeted towards children, so its level of horror is pretty tame. There is no blood, gore, or nudity. There are no horny teenagers having sex and being killed by any of the monsters (a common scene in 80’s horror). Monster Squad has such a light-hearted tone at its core that it should be considered more of a horror/comedy. With so many tropes and horror movie references, the movie feels like a passionate tribute to not just the 80s, but to the genre of horror itself.

Monster Squad has almost every trope in the book, and it doesn’t try to hide it. There is the “Fat Kid” (Brent Chalem) who is literally called this in the movie because he is fat and does stereotypical fat things like fart and eat chocolate bars. Every group in the 80s and 90s needed a fat kid (Chunk in The Goonies, “Ham” Porter in The Sandlot, Goldberg in The Mighty Ducks, ect.) to be the comic relief of the group. He gets bullied for his weight by a couple of thugs who have no redeeming qualities other than being bully tropes, because every movie in a school setting needs generic bullies. There’s also the requisite cool kid, Rudy (Ryan Lambert), who dresses like a 1950s greaser, with the typical slicked hair, black leather jacket, and sunglasses. He even smokes at school (!), so he is the full package of cool. Being the oldest one of the group, Rudy spends his time at the club watching women change. As the monsters start to run amok around the town, the police struggle to figure out what’s going on. Sean’s father (Stephen Macht) works as a detective on the case and is accompanied by his partner (Stan Shaw), who serves the black sidekick trope of the film. His partner often spends his time making jokes and being the comic relief, which is common with black sidekick characters of the time period, but he is so damn good at it that it’s not really a problem. Anyway, the two are called in to investigate why a 2,000 year-old mummy has mysteriously disappeared from the museum.

Besides hanging out with Dracula, it turns out that the Mummy likes to go into children’s closets. In one scene, Eugene (who is part of the Monster Squad) discovers the Mummy in his closet and brings in his dad to check it out for the old “there’s a monster in my closet” gag. The dad checks it out but doesn’t see the Mummy, while the audience and Eugene do. It’s a really silly scene and leaves a lot of questions (like why?), but it’s so funny and charming that it’s easy to look past its silliness. This a perfect example of the the movie knowing its just a popcorn film. Monster Squad doesn’t try to be logical; it just wants to be entertaining. “Mummy came in my house!”

Sean’s mother brings home a book that she got from a garage sale that coincidentally turns out to be Van Helsing’s diary. Because the diary is written only in German, the Monster Squad seeks the help of the “Scary German Guy” (yes that’s actually his name in the movie and in the credits) who can translate the book for them. It turns out the amulet appears every 100 years, and if it gets destroyed there is nothing that can stop the monsters from taking over the world. The Monster Squad needs a virgin (remember it’s a kid’s film) in order to open the portal and trap the monsters in Limbo. They ask one of the member’s older sister to help them since they think she is a virgin. It appears that “Scary German Guy” is an expert on monsters, but unfortunately not the monsters in Monster Squad. It turns out he was a victim of the Holocaust (talk about dark for a family movie) with a concentration camp number tattoo on his wrist. This is what makes the movie uniquely a children’s film of the 1980s. Back then there was no PC culture or obsession with making a movie family-friendly. The 80s didn’t care. They just added dark scenes and adult themes in kid’s films whenever they wanted, such as basically every scene in Return To Oz, Large Marge in Peewee’s Big Adventure, Judge Doom’s cartoon reveal in Who Framed Roger Rabbit?, and the nightmare scene in The Brave Little Toaster. Monster Squad really pushes the limits of a children’s film and earns its PG-13 rating, like a true 80s film. It’s not afraid to have children swear, talk about virginity, reference the Holocaust, mention that the Wolf Man has “nards” (classic line), and have Dracula call a little girl a “bitch.”

One of the most charming aspects of the film is Frankenstein’s monster. When they first meet him, everyone runs away except for Sean’s five year old sister, Phoebe (Ashley Bank), who grabs the monster’s hand and welcomes him. She even goes as far as calling everyone “chicken shit” for running away (this is why people love the 80s). The Monster Squad eventually befriends Frankenstein’s monster and they walk into the sunlight together in a wonderful, yet cheesy scene that looks like an advertisement about friendship. The adults in this film are pretty useless, so it’s of course up to the children to save the world. Outside of Sean’s father, the police are often shown being clueless about what’s going on or shown being thrown around by the monsters. The army of course doesn’t show up until after everything is settled, and in another classic 80s trope, the gang prepares to battle the monsters by making wooden stakes and silver bullets via montage, with an 80s pop song in the background. It’s not an 80s movie if there isn’t a montage of some sort. The final climax has a really cool mix of practical and special effects in the fight with the monsters, with some memorable quotes. While the ending is predictable, it will leave viewers feeling pretty satisfied.

“My name is Horace”

The Monster Squad is… well, awesome! It is pretty dark and violent for a kid’s film, but it has a lighthearted tone at its core, filled with over the top scenes that are pretty cheesy, but that’s what makes it charming. The movie has flaws and can be taken apart with logic, but who cares? It really doesn’t care about being anything more than entertainment, a tribute to everything people love about the 1980s and horror films. It’s the perfect popcorn movie to watch with friends for Halloween. Nosferatu’s Count Orlok, One of Cinema’s First and Most Inimitable Vampires