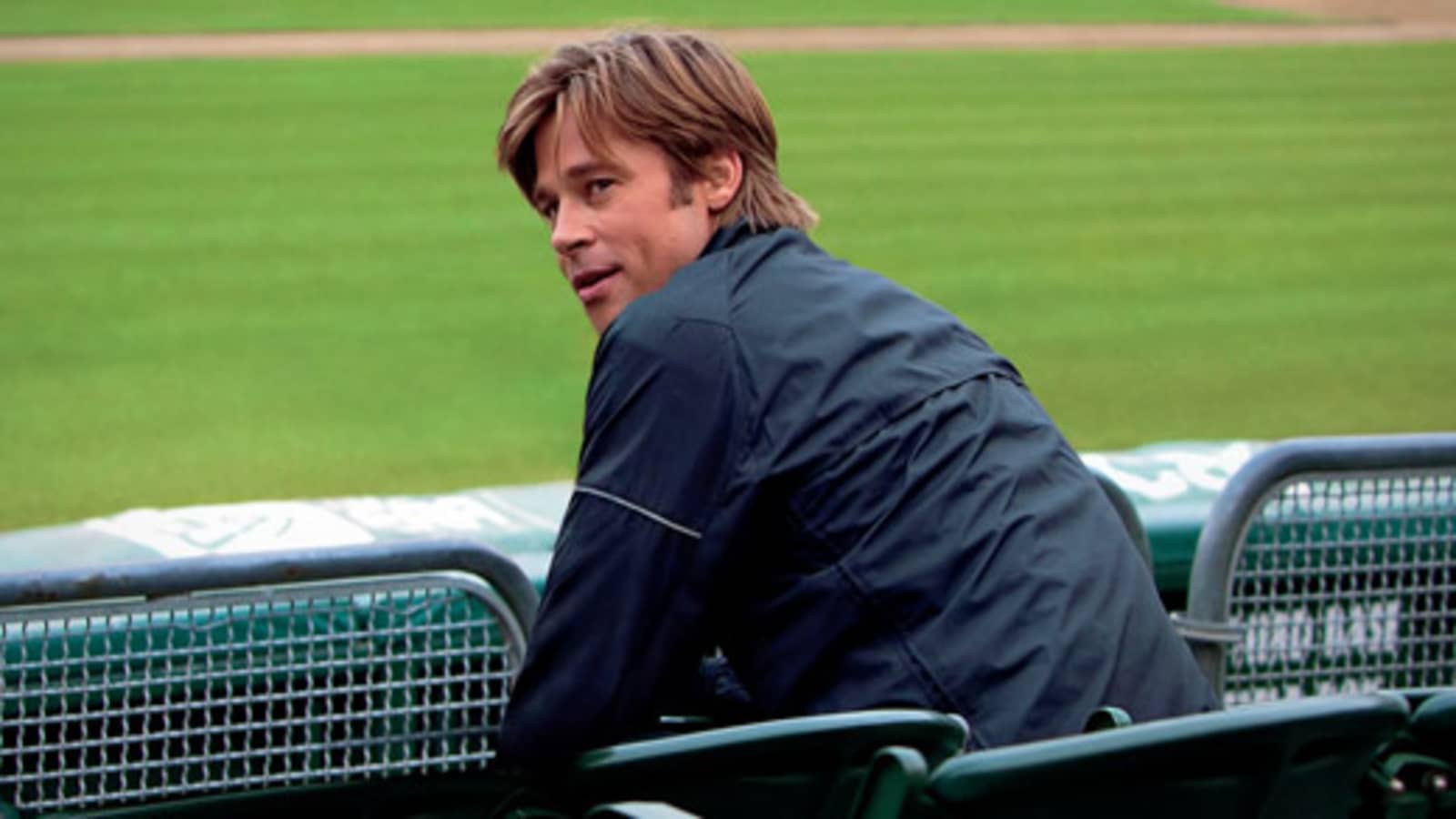 A Fine Balance of the Old School and New School

This month brings the ten-year anniversary of Moneyball. So in honor of all that, it seemed appropriate to take a look back at the 2011 film which followed Oakland Athletic’s General Manager Billy Beane and the way he and his front office embraced computer-generated analysis in 2002 to create a winning team out of a low budget and undervalued players.

One of the biggest achievements that will cement this film in history is how it manages to get an audience to come around to and understand the general philosophy around Bill James and sabermetrics. When you read the book, you come out the other end a borderline expert on the subject. For example, I remember when the film was first announced (back when Steven Soderbergh was still attached to direct) and Brad Pitt was set to star as Billy Beane. Knowing my dad had read the book and really liked it I went and told him the news. His first reaction was probably the same as most people who had read the book: “How are they going to make a movie out of that?”

I wanted to figure out where they were going to start too, so I picked up the book and read it. Before I get to praising the film, I just want to add that the book is incredible and one of the only ones I recommend to literally anyone. As I started reading it I realized the gateway into all of this: Billy Beane as a character. The film got this too, as Beane is a truly compelling character as played by Pitt. To watch the film is to understand what I’m talking about. Beane is a man facing odds he can’t overcome the same way other teams can. Beane is a man who experienced great loss early in his life, supposed to be the next great All-American Baseball player only to be completely underwhelmed. Billy Beane is a man who is placing all his faith in sabermetrics – in cold hard statistics. But what’s interesting is that this is a man who is ruled by superstition and the unquantifiable whenever the team plays. He refuses to watch the games, opting to work out and drive around only occasionally flipping on the tv or radio. When he returns to the game that will decide if the A’s will win 20 straight and set the new record for the longest winning streak, they are up 11-0. He thinks it’s “safe” for him to be there, but as soon as he shows up they start blowing the lead. When Peter looks at Beane leaving the game, he knows Beane blames himself. And we might agree with Beane there. It’s a compelling microcosmic moment of a man at war with himself.

Just like Beane puts together a winning team out of understanding the overlooked yet vital roles, director Bennett Miller puts together a wonderful cast, most filling secondary and tertiary roles but turning them into vital roles. Pitt and Jonah Hill do the most lifting throughout the film, as their terrific chemistry helps the film glide. Robin Wright can elevate any role and make an impact with any amount of screentime, and she does that here despite just 2 scenes – and only one of them on camera. Spike Jonze shows up for one scene as Billy’s ex-wife’s husband is a complimentary one-scene gem. He has next-to-no knowledge of baseball and overcompensates with politeness for his general intimidation by Beane. It’s comical, but thankfully not over-the-top. Chris Pratt is possibly one of the biggest stars right now, but just 3 years ago he was still known as a supporting comedy player. He plays a supporting role in this as well, but it was his first substantial stab at non-comedy and can be credited as going a long way to establish his range.

The biggest gem among the supporting cast is in one of the biggest gems we had in acting until tragedy struck this year: Philip Seymour Hoffman. I can’t put into words what we lost the day he died, but to watch him act is to understand that very thing. His performance as A’s manager Art Howe is a prime example of how transcendently useful he could be to any film. The way Howe’s written is as a mopey and cranky man who refuses to cooperate with Beane and serve as a foil. But in Hoffman’s hands, he’s a multi-dimensional human being. He has valid reasons for his disagreements and caution towards Beane’s ideals. Beane and Howe disagree on how to run this team, but Miller still allows for moments of respect and admiration between the two. There’s an intriguing moment after Hoffman’s first scene when Billy heads back into a conference room after a passive-aggressive discussion of Howe’s contract. We expect the next scene in the conference room to begin as soon as Billy has shut the door, but something much more thoughtful and introspective happens. The camera stays on Howe for a few more seconds as he ponders what’s just happened, swallows it, and heads back down the hall. It’s just moments like that where you see just how much depth Hoffman could bring to any role.

What really makes this film so impactful is that while it’s about the men who changed the way that teams structured themselves and evaluated players – and supports their arguments and ideals – it also fully acknowledges that baseball isn’t any sort of exact science both in the construction of its story and characters as well as in the cinematography and editing. What it’s about is interesting, but how it’s about it is far more engaging. It’s doing a high wire balancing act between the old school way of thinking and the new school way of thinking without giving too far to either way. This is a rare film that can agree with both sides of its thinking to a certain extent.

Consider the scene when Peter runs Billy through his analytical process of evaluating players. Numbers, statistics, and code flash across the screen. Closeups of said players encompass the frame. What’s important to notice in this sequence is how pixilated Miller has chosen to make each of these shots. He’s not afraid of making the digitalization and non-organic presentation of this evaluation known. He’s acknowledging this is all coming from a computer. On the flip side when the Oakland A’s begin the season as a losing team Miller shows those losses and standings with the same focus on pixilation, but also just as much during shots of the standings during the historic 20 game win streak. Miller is willing to acknowledge the non-organic in the way we evaluate the game of baseball whether or not the evaluations are good or bad.

To juxtapose the acknowledgment of the non-organic influence on the evaluation of baseball, Miller fully embraces the cinematic when it comes to the moments of true unpredictability in sports. It begins when the team starts to play as predicted, but with an air of unpredictability in how they’re doing it. There’s a wonderfully understated one-take sequence in which the camera follows Beane through the clubhouse, heightening the exhilarating sense of the impossible in the air during this time of the season. When the infamous 20 game win streak comes around, Miller fully embraces the theatrics to highlight the wonderful thing about sports – the impossible can actually happen. Consider the way it highlights certain moments during the win streak in slow motion and lit like a spotlight is on them. It’s evocative of how it felt for myself and others to be watching this team doing that over a decade ago. And something tells me the way they film those moments evokes how it felt to be on that team then. And when Hatteberg hits the game-winning home run to win the 20th straight game, what a cinematic moment it is. The wide shot of the pitch coming to him is slowed down, and the crack of the bat immediately cuts to Billy in the clubhouse, looking up in the same state of disbelief we all are in. Cut back to a wide of the ball going out of the park. Everyone in the audience pumps their fist as the crowd in the film goes wild. Then cut back to Billy in solitude and silence getting excited. That’s filmmaking right there.

“It’s hard not to be romantic about baseball”, Billy Beane remarks to Peter after the win streak, bringing us back to the personal war with himself between superstition and hard science. In Billy’s mind, his experiment isn’t vindicated until he’s won a World Series with it. He never won the final game of the season. But he has changed the game. As one character says to Beane: “Anybody who’s not tearing their team down right now and rebuilding it using your model, they’re dinosaurs.” And that’s the truth, sabermetrics has become an integral part of the game. This film agrees with what Beane and company were pioneering, but what makes it special is that it presents what even the most ardent of statheads will tell you – the human and unpredictable element has an important part of the game too. It’s a film that can reconcile both sides of its central debate, and that’s why it stands as one of the best films of the last decade.

Live and Let Die is One of the Lesser Bond Films