NYAFF 2018: Sweetness Can’t Solve the Problem of Middle-Age in ‘Men on the Dragon’

The ostensible premise of Sunny Chan’s Men on the Dragon, the centerpiece film at the 2018 New York Asian Film Festival, is simple: four telecom workers, fearing cutbacks, join the company’s dragon boat racing team to signal their loyalty to their corporate overlords. What, exactly, is the relationship between dragon boat racing and one’s job security? How would joining the team prevent these men from corporate cuts? Well, that’s somewhat unclear — and it grows even more unclear as Men on the Dragon loses the thread of its corporate drama and becomes crowded with the neatly outlined personal problems of each man.

The foursome’s personal problems are entirely unrelated to both their job performance or the racing, so naturally, the film conflates all three as it homes in on the saccharine lesson at the heart of many sports films: by learning teamwork and determination, these men might just overcome the obstacles in their personal lives. An immediately glaring issue here, which blunts the impact of the film’s overarching lesson, is that the men’s personal problems are neither complex nor novel.

Chan Lung is in love with his neighbor, but afraid to divulge his feelings. Wong Suk Yee feels henpecked by his wife, daughter, and mother-in-law, with whom he lives in a cramped apartment. Tai, as middle manager and the boss of the other men, feels alienated at work; at home, his wife is in the process of leaving him. Not enough background is given to tell us the root of each man’s problem. Not enough attention is paid to their characters to suggest these men were ever different than they are in the film. Men on the Dragon seems to simply believe that the default state of middle-aged men is to be dismantled by the women in their lives. 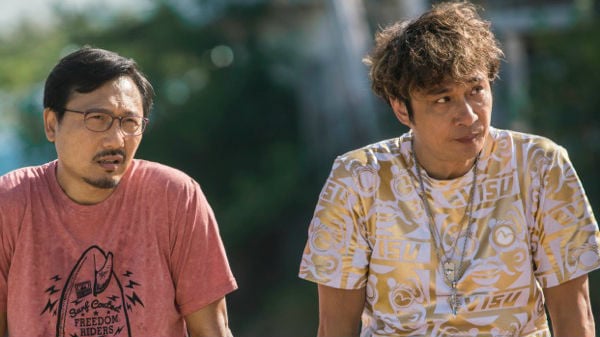 Which is why, even as the film positions athletics as a solution for the men, it hardly seems like they have solvable, proper problems to begin with. The problem is within the men themselves. They are cowed by life, insecure, overwhelmed, and underwhelming. Viewers will notice that even as they learn to row, none of their “problems” is actually solved. Stirring music and the exchanges of cloying platitudes merely signal that a new perspective has been achieved by the protagonists.

Men on the Dragon is most effective when veering into straightforward comedy, thanks mostly to the performances. Frances Ng plays against type as Lung, a kind of self-conscious yet free-spirited buffoon who is a far cry from Ng’s most notable action roles. His elastic facial expressions and unfortunate fashion sense (Lung likes ornately patterned tee shirts) elicit laughs during training scenes. As Wong, Chan-Leung Poon communicates a middle-aged insecurity and vulnerability that actually manages to imply some vague stakes, even when the film itself has trouble clarifying how all its pieces — boat racing, corporate cutbacks, and home life — coalesce.

The film is incessantly scored, with generic muzak signaling the tone of each scene. In this regard — and it’s often unclear whether intentionally or not — Men on the Dragon regularly hearkens back to both 1990s sitcoms and 1980s sports films. There is a disjointed quality that plagues the script, which narratively leapfrogs between the men without attending fully to any particular storyline. The bit about the men fearing layoffs is all but abandoned in the second half, which haphazardly shifts focus to the romantic entanglement in each man’s life. This is unfortunate; at the very least, the story of veteran employees fearing for their jobs taps into a universal anxiety within the corporate world. Instead, Men on the Dragon attempts to evoke the insecurities of aged men who have sacrificed their virility and masculinity by aging in the first place. Yet nothing in the film implies that these men were ever virile to begin with, or that by the end, they have reclaimed some domain over their manhood. 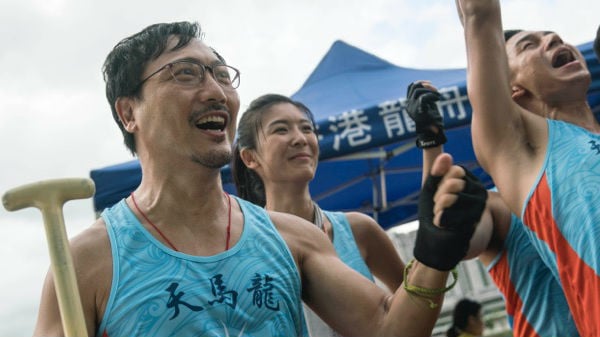 I must confess that watching the climactic race, I didn’t notice whether or not our heroes won. It didn’t seem to matter; continuing the slapdash narrative structure of Men on the Dragon, the team, mid-race, decides to continue up river to the courthouse, where Lung’s neighbor is set to marry her erstwhile boyfriend. Whether or not he successfully gets his girl is irrelevant here — the film ends with an obvious and sickly-sweet endorsement of daring to try. Had Men on the Dragon dared to focus on one of its storylines, either becoming more streamlined to do so or simply longer to flesh out it’s component parts, perhaps that message would have more impact. Instead, this film about men struggling to regain their momentum struggles to sustain any of its own.

This review looks at the film in a very technical perspective – the problems and solution. However my take is that the film is about attitude. When you regain the right attitude, you can solve the problems. Attitude is what drives these men, and lack there of is what got them into trouble in the first place. The film did really well because it reminds us that life is about facing and solving problems.