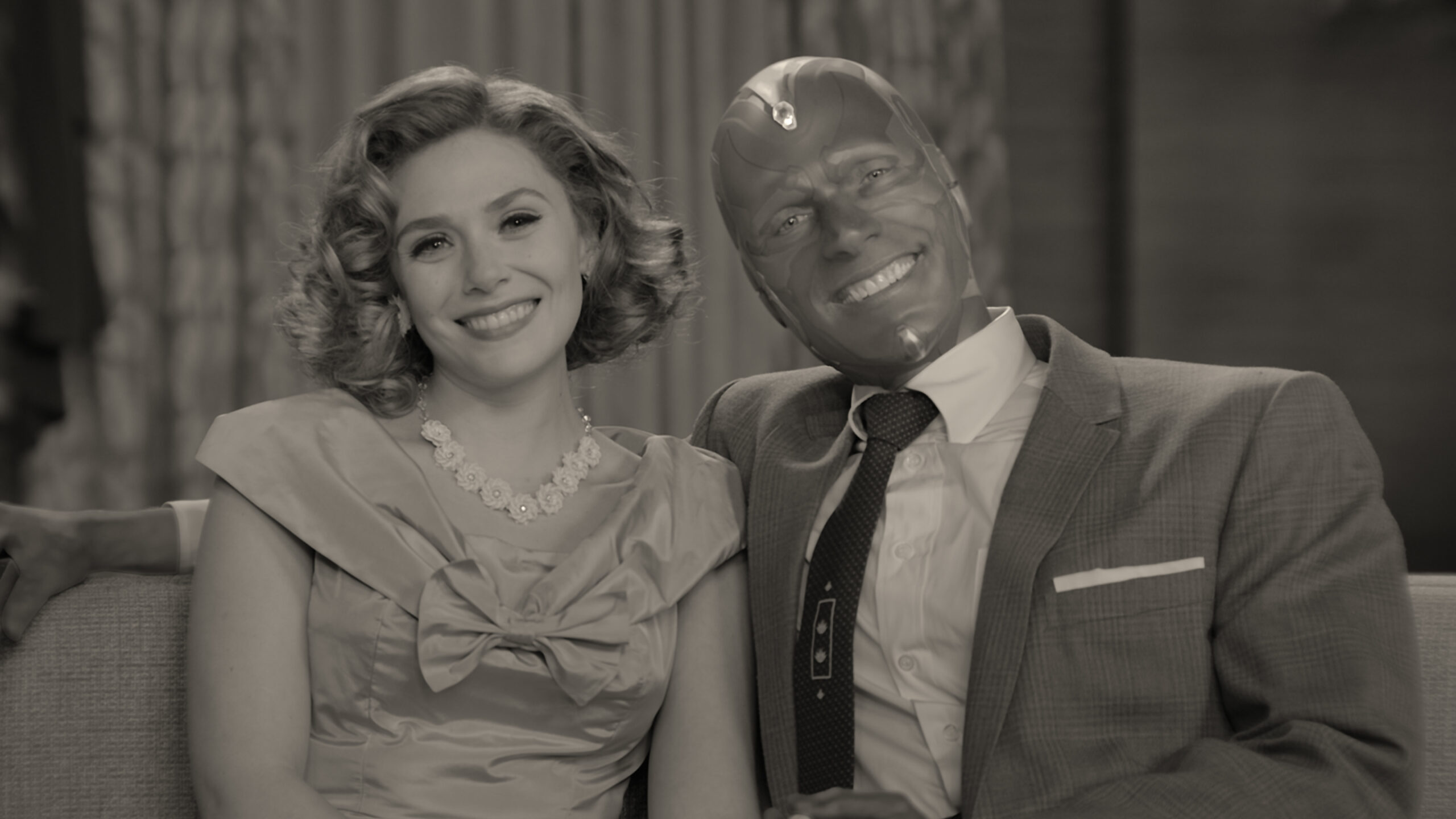 One of the anticipated Marvel Cinematic Universe spin off shows for the Disney Plus streaming service finally has a full length trailer. WandaVision– a not so subtle play on words- will focus on the characters Scarlet Witch- Wanda Maximoff- played by Elizabeth Olsen and Vision, played by Paul Bettany. The series takes place following the events of the 2019 MCU film Avengers: Endgame. The show moved up to 2020 following an initial 2021 release date, switching places with the other Disney Plus Marvel show Falcon and The Winter Solider. There’s quite a lot to unpack in what looks to be Marvel most bizarrely intriguing project yet.

Not much is known about the plot of the show and the trailer offers more questions than answers. The official synopsis for WandaVision reads as follows:

Set after the events of Avengers: Endgame, Wanda Maximoff and Vision begin to suspect things are not as they seem as the two live their ideal suburban life.

This is about as vague as it can possibly get. The trailer shows the two of them engaged in a 50’s style sitcom, living a content married life. When neighbours ask them about their background, the couple struggle to answer. This suggests that the premise will centre on the two characters trying to differentiate fiction from reality. We also see Wanda and Vision in various fashion styles, suggesting different time periods. Let’s throw in some time travel speculation just to confuse things even more so.

One key element of WandaVision is- obviously- Vision who as you’ll know if you saw Avengers: Infinity War is very much dead. He died not once, but twice. He was killed the first time by his lady love Wanda in an attempt to keep the Mind Stone- embedded in his head- out of Thanos’s grasp. He was then killed a second time by Thanos, who used the Time Stone to reverse time and get to the Mind Gem before Wanda could. Thanos rips it clean out of Vision’s skull. So yeah- like I said- very much dead. So how is he here in this odd 50’s sitcom scenario with Wanda? I’m guessing WandaVision will answer that question as it is brought up by a character in the trailer. The female character- played by Kathryn Hahn who confirmed that her name is Agnes-expresses fear that she is dead when Vision awakes her from a nap she is taking in her car whilst dressed like a witch. As you do. These are all entirely normal situations. When Vision asks her why she would think that she is dead, she responds with “Because you are”. Vision’s expression suggests that he is unaware of this, or at least hugely confused. The show is likely to explore Vision’s fate post Endgame but Wanda’s powers are likely to be responsible for at least some of the weird occurrences and possibly for Vision’s resurrection.

There is no doubting that Wanda is one of the most powerful Avengers due to her telekinetic manipulation abilities. However, the show looks like it will be delving into just how powerful she really is. Could it be that Wanda is altering the fabric of time and space itself to create a happier alternate reality for herself? Her character has done this before, in the House of M comic book series.  Wanda has arguably had one of the more tragic stories of the MCU heroes. She lost her parents at a young age. Her home was destroyed and her brother Pietro/ Quicksilver was killed in Avengers: Age of Ultron. She accidentally caused multiple civilian causalities, leading to her blaming herself and being put under home arrest in Captain America: Civil War. She then had to kill the love of her life- Vision- in Avengers: Infinity War as she was the only one powerful enough to do so. Not only that, but she had to watch him die a second time when Thanos turned back time. She also got dusted in Infinity War, only to come back in Endgame and almost defeat Thanos singlehandedly. Safe to say, she’s had a bit of a bad time. Losing all the people that she loves more than anything is sure to have an effect on a person. So what could happen if that person has incredibly strong powers? Powers that could possibly create all new realities? Why wouldn’t you want to invent a happier, sitcom style life if you had experienced all that she has?

Another interesting part of the trailer is the appearance of Monica Rambeau. Rambeau is a character from the Marvel comics who was portrayed as a child in 2019’s Captain Marvel MCU film, being the daughter of Carol Danvers’s best friend Maria Rambeau and having a close aunt/niece relationship with Carol. In the comics, she takes over the mantle of Captain Marvel after obtaining energy based powers and has also been known as a hero under the aliases of Photon, Spectrum and Pulsar. In WandaVision, Teyonah Parris takes over the role as a grown up Monica. Her role in the show isn’t clear but we see her fall from a portal in front of government agents. Has she already got her powers at this point or is this how she obtains them?

There are references aplenty in the trailer. From a reference to the aforementioned House of M comic series – where Scarlet Witch goes a bit mad and loses control of her powers, bending reality to her will- to Wanda and Vision appearing in their classic comic book outfits, the show is obviously taking inspiration from Marvel comics throughout the decades. There are also some general pop culture references as well, such as their 50’s paradise looking an awful lot like the I Love Lucy show from 1951 and the use of The Platters version of the 1944 song Twilight Time. The general premise is pretty 50’s too, with Wanda and Vision having to hide their true selves- that of a superhuman and an android- to protect their perfect life. Older sitcoms like I Dream of Jeannie and Bewitched adapted this kind of plot device so that optimum hilarity would ensue as characters would go to extreme lengths to hide their extraordinary true identities.

WandaVision is looking really interesting from what we have seen so far. It certainly seems to be diverging from Marvel’s normal film and television structures. If the show stays strong in its distinctive style, it may be one of the most unique things to come from Marvel in a long while.

WandaVision is coming to Disney Plus exclusively in December 2020. Have a look at the trailer below.

Sad News DS Fans: The Nintendo 3DS Has Been Discontinued