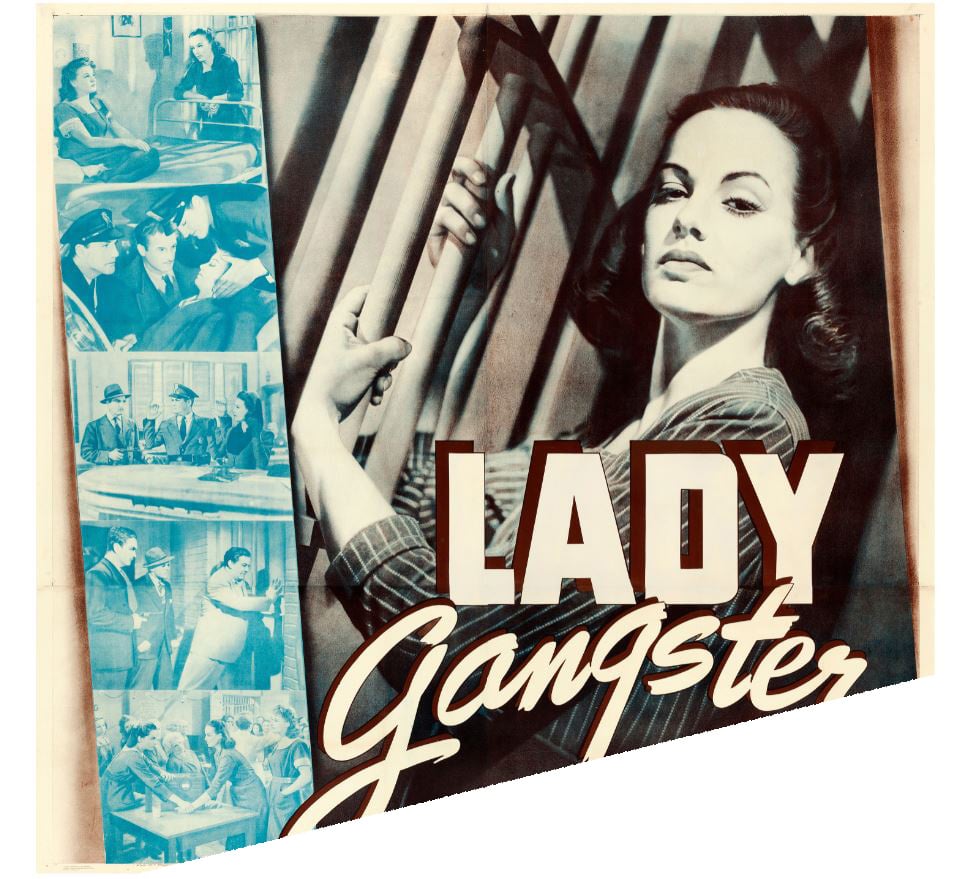 Dorothy ‘Dot’ Burton (Faye Emerson) and her trio of male cohorts (including a young Jackie Gleason!) drive quickly to their much desired destination: the bank. The quartet are not ordinary citizens looking for a withdrawal but rather a gang of thieves on the cusp of a brilliant coup, one involving Dot’s typical brilliant acting skills that cons the dopey security guard to open the bank’s doors to her despite that business hours have not yet commenced. One thing leads to another and, despite that her partners make away with the loot, Dot’s duplicity only gets her so far in the eyes of the detectives that arrive on the scene. Even finding out that an old friend and potential love interest, Kenneth Philips (Frank Wilcox), is a big shot lawyer can’t help. Much to her and Kenneth’s dismay, she lands in the slammer. Yet even behind bars Dot strives to pull some strings to get out and run the show even though her three criminal acquaintances believe to have rid themselves of her, thus leaving most of the fruits of their efforts for themselves. There are some characters within the prison walls however that would like nothing more than to spoil Dot’s planning, such as embittered, tattle-tale Lucy (Ruth Ford) and her buddy, the lip reading Deaf Annie (Dorothy Adams).

There is a lot to director Robert Flory’s Lady Gangster that makes the end product feel rather slight. From the production values, which cannot hide the project’s B-movie status even if they tried their hardest, to some of the acting, and a collection of simplified characterizations. Even the script itself does not hold much as far as deep, complex themes are concerned, unlike several other crime thrillers of the period that aimed for a certain level of pathos and psychological nuance. Lady Gangster is pretty much what it advertises itself as: a movie in which there is a gangster lady that calls shots and masterminds plans. Since she is a gangster, of sorts, she is going to play rough to get her way, rules and opposition be damned. The movie is therefore more of a lark than anything else, a cheaply packaged 70 minutes that offer some twists, some witty lines, all of which is easily digestible, if also easily forgettable. It never feels as though anyone, from the screenwriter to the director, was in the mood to make anything earth shattering.

Lady Gangster Is Mostly Slight, But Has An Excellent Leading Lady…

While all of that is true, the fact of the matter is that it’s a very watchable movie, at times quite engaging even. The first thing that deserves mention is the fact that the lead is a woman, and a rather smart, though cookie at that. At the time of this article’s publication, the 2015 calendar year has recently concluded, with women actors deservedly taking much of the spotlight in big movies such as Mad Max: Fury Road (despite that film’s title!), Star Wars: The Force Awakens and Mission: Impossible-Rogue Nation. Whether the trend of awarding women as much screen time and impressive characters as their male colleagues will continue remains to be seen, although can hope. The poignant reality of comparing and contrasting the leading ladies of films from 2015 to that of Lady Gangster is that in 2015 it was argued that the strong, recurring presence of women characters was a step in the right direction. Again, this was an argument made regularly throughout 2015. Lady Gangster was made and released theatrically in 1942. While it is encouraging that last year saw an important upswing in actresses earning important roles in big movies, it is just as depressing to note that it occurred 73 years after Lady Gangster.

This is an extraordinary long-winded way to highlight potential interest in the movie for its lead character. Dot Burton, as played by Faye Emerson, is incredibly fun to watch and without question the movie’s strongest selling point. Whereas most of the other roles in the movie are either uninspired schemers and somewhat wishy-washy, Dot is a smart aleck, the sort that one cannot help but admire. There is impressive gusto about her, she oozes of class and sass, never serving up too much of either, which is important because she is a villain at heart, yet in some ways a loveable one. Too much sass and she might become unlikeable, too much class it would be difficult to accept her as a villain. Emerson straddles the line to perfection, showing that Dot is not to be tangled with, unless of course one does so with an equally sneaky plan of attack, which ends up being that case with Lucy and Deaf Annie. The latter two are amusing characters, and actresses Dorothy Adams and Ruth Ford deserve some credit for their game performances, although neither holds a candle to Emerson, who owns the film. Better still, she gives Dot with a bit of an emotional core. When she realizes that Kenneth is actually trying to help her out, she begins so emote in a slightly more humane way, almost as if she might reciprocate the fuzzy feelings he evidently has for her.

Sadly, not much else in the film can equal Emerson’s glowing presence and infectious energy. As mentioned, both Ford and Adam are decent given their roles, but either the script and direction asks them to play up their parts to the umpteenth degree or they themselves to embellish way too much. Frank Wilcox is not a particularly engaging romantic lead, although his lack of gravitas is offset by his limited screen time. Dot’s intricate scheming from behind bars is consistently engaging and fun to watch play out, yet the ways in which her enemies thwart her attempts are patently ridiculous, making their success even more shocking. One in particular in which Lucy successfully convince the prison’s head warden to hold off on granting Dot her parole is utterly laughable for how easily the warden is duped. In other words, the entire endeavour rests on a script that is wonky at best. The one moment when the movie does think outside the box is a scene in which one of the gangsters that escaped the authority visits Dot in prison under the guise of the inmate’s sister. It’s unexpected and really quite funny to boot.

Lady Gangster is now practically long forgotten in the annals of film history, kept afloat by its existence in the public domain, hence readily available for any and all that wish to take a chance on it online. Frankly, there isn’t a bevy of ingredients operating in its favour, but the few that do truthfully make the film worthwhile, chief among the presence of leading lady Faye Emerson. In light of the burgeoning era of strong female leads, anyone interested in seeing what a movie from 1940s with an equivalent role is like would do well to check out Lady Gangster.

Deadline at Dawn is Widely Unfocused

High Sierra is Essential Viewing for Fans of...

Dark City Serves as a Fine Introduction to...

The Killers Tells an Excellent Story with Remarkable...

The Racket Stands as a Reasonably Accomplished Procedural

A History of Violence Marked a Major Turning...