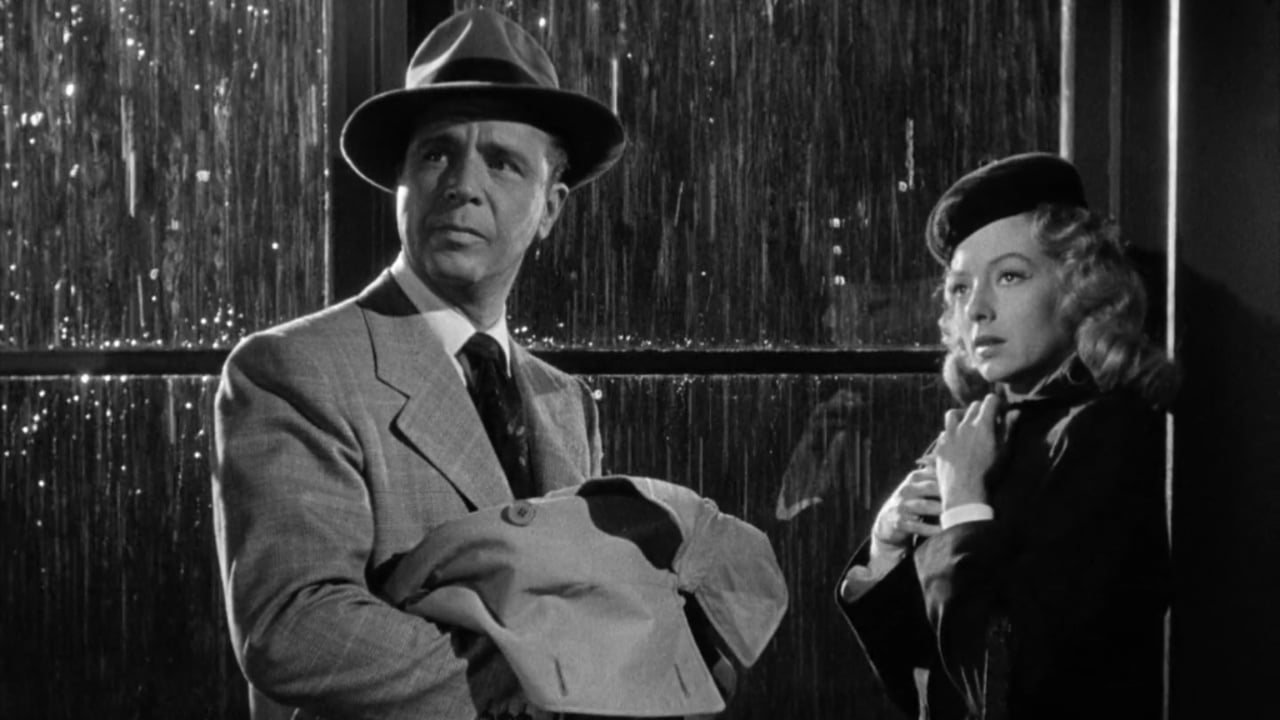 Balancing plot and character must be a complex feat to pull off. It seems that every week, especially with the plethora of blogs and websites dedicated to film reviews, articles, and podcasts, discount various movies for their lack of character development, presenting overly convoluted plots and many similar faux pas. Carrying the precarious pressures of both screenwriting and directing can easily make the exercise of filmmaking all the more demanding, save perhaps for the few masters of both art forms (even then, they would surely confess to experiencing some troubled waters).  Robert Rossen, who would direct All The King’s Men to Oscar victory in 1949, worked on a much smaller scale for 1947′s Johnny O’Clock.

Johnny O’Clock (Dick Powell) is an upper-level employee at a local and legal gambling establishment operating under owner Pete Marchettis (Thomas Gomez). Johnny may not be top dog, but his managerial position results in him running into an entire hoard of colourful characters, from the coat check girl Harriet Hobson (Nina Foch), her corrupt cop beau Chuck (Jim Bannon), and Inspector Koch (Lee J. Cobb), who often peruses the premise in the hopes of catching someone slip up, Johnny being a favourite target of his. When Harriet, who pleaded for Johnny’s help to escape her boyfriend’s armful embrace, turns up dead in her apartment and a cop’s overcoat with blood stains is found in the river, the protagonist sees himself tossed into as fine a mix as they come. When Harriet’s sister Nancy turns up looking for answers, the two eventually realize that someone is trying to put the squeeze them.

Watching Johnny O’Clock is both an encouraging and disappointing experience. It is clear that writer-director Robert Rossen has some very specific ideas in mind as to what story he wants to tell and how. Johnny O’Clock is the sort of slow-burn misadventure in which the protagonist is slowly, inexorably drawn into a false sense of security until the dirty little secrets begin rearing their ugly heads, at which point he has to dig deep to pull out all the stops if he is ever to straighten all the crooked arrows. Plenty of noir entries adhere to a similar pattern, the better ones successfully putting their own spin on the template.

With Johnny O’Clock, Rossen aims to show the minutia of how the anti-hero, Johnny, is coaxed into a flirtatious relationship on two fronts (Nancy and his boss’ main squeeze, Nelle, played by Ellen Drew) as forces conspire behind the scenes to be rid of him for one reason or another. Not a bad plan of action by any definition, although when it comes to relishing in minutia in what is already a slow-burn picture, the incurred risk is that the film lacks momentum, content to explore certain aspects that help build the world of the film whilst forgoing other equally important elements that would make the final product a more unified whole. It is specifically in this regard that Johnny O’Clock fails to make much of an impact. Rossen is clearly fond of small details that build characters and the relationships they develop with one another. He handles them deftly here, his efforts producing a believable, sufficiently organic bond between Johnny and Nancy. At first, their paths cross for the wrong reasons, and, true to film noir tropes, the temptation to try to remain together only seems to worsen their lot, but the chemistry between the two has that the viewer will want to see them spend more time with one another. Their heads say one thing, their hearts another, the end game of which can easily alter their lives forever depending on what they choose to do.

While that is a nice aspect, the flip side is that the movie lacks any real energy as a whole. There is a double mystery transpiring in the background (Harriet’s death and the missing cop), yet the film spends an enormous amount of time on the blossoming love between Johnny and Nancy with the occasionally uncomfortable re-acquaintance with Nelle, who would much rather end up with Johnny than with Marchettis. Lost in the shuffle is arguably the most critical ingredient: what is putting Johnny and Nancy in danger. Every now and then, Inspector Koch shows up either to question Johnny or study the scene of a crime, but ultimately that character feels wasted, which is a crying shame considering the filmmakers managed to cast the great Lee J. Cobb in the role. It is as if the movie forgets about the other half of the story. By the time the revelations start pouring out, a viewer may be forgiven for finding themselves a bit lost, trying to pick up the pieces as best they can when old names and motivations are spewed through rapid-fire dialogue.

It is a case where the blame lays squarely at the feet of the writer-director. For a filmmaker who would be nominated for Best Director by the Academy only 2 years later, Rossen’s effort in Johnny O’Clock lacks a considerable amount of punch. On the other hand, the actors should be spared any of the blame. Co-stars Dick Powell and Evelyn Keyes are superb separately and together on screen, which is thankfully most of the time once the latter enters the fray. Powell, no stranger to playing cool cats who can use words like whips, is exceptional. It may be among his best performances despite the lackluster script. His style is not entirely dissimilar to Robert Mitchum insofar as he can play characters who display aloofness while their brains continuously calculate what their next moves should be, only that Powell turns up the performances just a notch with an extra level of edge when the situation demands it. Keyes plays a different personality, one who shows much more desperation than her male co-star. She is just as believable, however, making it very easy to earn the viewer’s empathy and hope that she makes it through the picture along with Johnny. Some praise should also go to Drew, who brings some incredible sex appeal to her scenes. She is quite the little tease yet also provides some definite hints that actual feelings and three-dimensionality lie behind her flirtatious mask.

One cannot help but feel as though Johnny O’Clock is a missed opportunity. It is equipped with a cast to die for, a critically acclaimed director, and begins by setting interesting story points in motion that should, conceptually, make for an excellent noir. Concept and practice are completely different matters, however. In the end, the movie meanders too much on one front, almost relishing the other no less important one to the backburner. For that reason, it fails to fully resonate or capture one ‘s attention and imagination. The titular protagonist ends up feeling smarter than the movie as a whole.

Behind Green Lights Goes The Route Of Comedy With Mixed Results