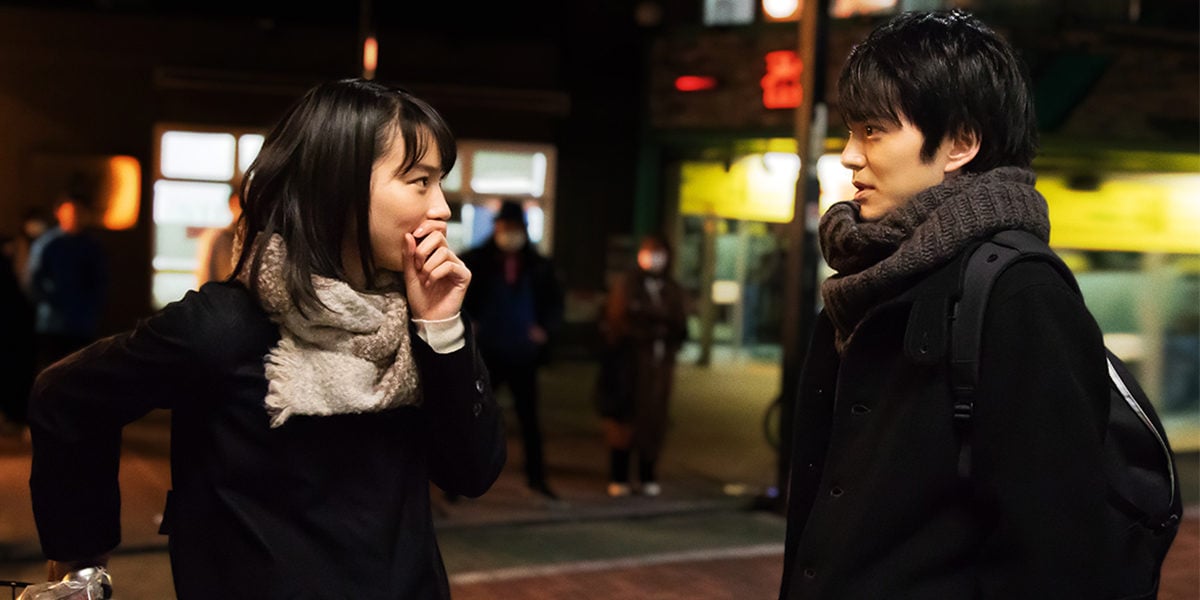 “It’s dangerous to immerse in the silence of the night. The loneliness will soon trip you up.”

Hold Me Back follows the life of thirty-one-year-old Kuroda Mitsuko (Non), a woman happily living a solo life. Her days are fairly regular and without much worry, however, after she finds herself falling for a younger man, things seem to take a turn. All the while she discusses her life with a counselor inside her own mind named A for Answer. A has always been a guiding force for her, however with this speedbump in her life A’s expertise is stretched to the limit.

From the outside looking in it may seem like a typical rom-com, but there’s a really captivating style behind Hold Me Back. From the get-go, we have this first-person style camera from a character who’s holding a conversation with our lead. There are creative and quite erratic camera cuts here and there, giving off a slightly off-kilter vibe despite the innocence of what’s going on. Then once our lead returns home, we find that this voice and camera POV does not belong to a physical person, as she is suddenly all alone.

Hold Me Back is a triumphant film channeling romance, comedy, and some personal drama that explores loneliness and navigating the romantic world after flying solo for so long. Instead of simply focusing on ‘getting her groove back’ the film hones in on the mental state someone can find comfort in when living a more solitary life. There’s a comfort in loneliness, but the crushing weight it can carry is also on display.

The film is more a journey of self-exploration than just a search for love. The first half does center more around trying to find a way back into the dating world, but Mitsuko’s tale takes us through all her anxieties and troubles in navigating everyday life. Happiness seems to be eluding her, and things she formerly didn’t consider now weigh heavy on her mind. The story at the heart of this may be a familiar one, but the journey there is anything but.

Non perfectly captures the quirky and awkward energy for Mitsuko. There’s a mixture of hilarity and tragedy in her interactions, especially with Tada-kun (Kento Hayashi). Things feel real, with extended conversations and longer shots, and the main actors having such a good idea about the characters they’re portraying. Of course, there are wacky characters and plenty of off-the-wall moments, but the conversing and interacting in some of the more intimate moments really does feel genuine. Then when the mask comes off and the inner pain and trauma come forward, Non gives an incredible performance of that side as well. She has the power to captivate the audience, and her range is really on show here.

There’s a lot here to unpack, and not just more typical rom-com stuff. The inner monologue and the sense of self are just as on show as the blossoming romance and recapturing the youthful pursuit of it. The unique approach to the narrator, instead, the inner thoughts and internal conflicts coming out as a rather direct conversation between Mitsuko and her inner voice Answer, is a fantastic fresh idea that really gives Hold Me Back a strong identity. The fragility of Mitsuko is heightened with a series of almost surreal scenes in an emotional, heart-wrenching, and ultimately heart-warming finale. Don’t sleep on this one, Hold Me Back is truly something special.