All Might has retired, and the hero landscape is receiving a mighty shake up consequently. To combat the unrest surrounding its students’ well being, U.A. High School rolls out a brand spanking new dormitory setup. With this, Class 1-A flies the nest and settles into their shared accommodation. 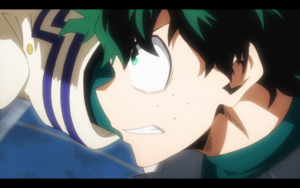 Episode 13, “Moving Into Dorms”, takes a hiatus from the trauma and turmoil of villainous fiascos, introducing Class 1-A’s new residence. Chock full of character interactions ranging from heart melting to tear jerking, alongside a spattering of funny bits, My Hero Academia impresses even when its turbulent action is far from the spotlight. Amusing tidbits of character factoids (like Shoto’s popularity with his female classmates and Sato’s surprise talent for baking) are peppered throughout “Moving Into Dorms”, resulting in each and every line of dialogue, regardless of narrative essentialness, being consistently fun. 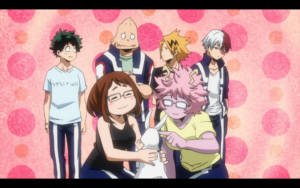 However, juxtaposing the lightheartedness of “Moving Into Dorms”, Asui’s tearful offloading of emotions with Izuku, Eijiro, Iida, Momo, and Shoto, tugs on the heartstrings. With prior foreshadowing of Asui’s state of mind, alongside an effective segue courtesy of Ochaco, said exchange avoids clashing tonally with the preceding peppy comedy of “Moving Into Dorms”, resulting in an intelligently blended cacophony of character driven setpieces, and one of the most enjoyable episodes of My Hero Academia this season. 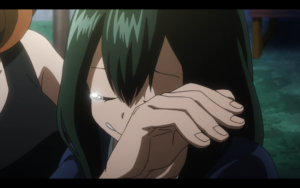 Alas, a lone gripe of “Moving Into Dorms” is Minoru’s perverted demeanour being dragged into the firing line for gags on too frequent a basis. Whilst tolerable in tiny portions, such a plentiful quantity of jokes flaunting the grape headed pervert grows groan inducing-ly tiresome.

Episode 14, “Create Those Ultimate Moves”, sees Class 1-A bounding back into the swing of school, as classes kick off once again. One of My Hero Academia’s strengths is its variating of two narrative formats. Format one showcases school classes and events, from the U.A. Sports Festival to the Final Exams. Format two visits villainous encounters, including stepping up against Stain, and All Might’s recent face off with All For One. Whilst said narrative formats intertwine from time to time, there’s oftentimes a degree of separation between the two. With much of My Hero Academia’s third season so far boasting wealths of villainy, a more school-orientated arc delivers a welcome change of pace.

Tasked with crafting ultimate moves akin to All Might’s United States of Smash and Iida’s Recipro Burst, Class 1-A begin training with Ectoplasm’s clones. Izuku’s arms are still well ‘n’ truly wrecked following his bout with Muscular, driving him to think outside the box by creating a combative style that neglects reliance on his punching prowess. Eccentric inventor Mei makes a grand return after a lengthy absence post U.A.’s Sports Festival, alongside teachers last seen during the Final Exams. Mei’s role within “Create Those Ultimate Moves” feels purposeful, and certain comments courtesy of Power Loader hint she’ll fulfil a vital role in the bigger picture of My Hero Academia’s narrative. Bearing no intention of binning its promising side characters upon outliving their short term usefulness, My Hero Academia teases awesome potential for its far away future. 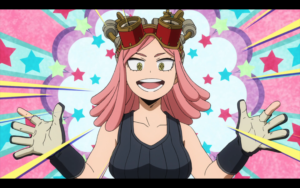 Mei’s back, and in a pretty chipper mood.

Looking forward, the cast of budding heroes must endure an arduous exam to procure Provisional Hero Licenses. With adrenaline-y action and enticing encounters on the horizon (probably), anticipating what’s to come in My Hero Academia is just as much a joy as ever.