The provisional hero license exam is underway, singing to a tune of crazy quirks and tense tenacity. Participants aim to pass no matter the cost, hence their willingness to ruthlessly eliminate their rivals from proceedings. Featuring fiery face offs, My Hero Academia brings the noise once again.

Episode 17, ‘Class 1-A‘, offers cool bits of the titular class. Most notably, ‘Class 1-A‘ devotes a punchy chunk to Kyoka, Mezo, Momo and Tsuyu. During their inspection of a building (part of the provisional hero license exam’s eclectic terrain), the four are targeted by students of Seiai Academy, but despite Seiai picking off the powers of Kyoka, Mezo and Tsuyu, Momo’s quirk punctures a hole in their best laid plans. Showing the same smarts that allowed her and Shoto to best Sh?ta during the final exams, she applies her quirk’s versatility to overthrow Seiai’s trap, resulting in the four U.A. students passing the first phase of the provisional hero license exam. 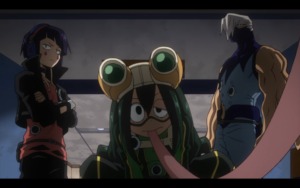 Could they look any cooler?

This scene of ‘Class 1-A‘ flaunts ferocity as the four are overwhelmed, cruelly cornered by foes whom they know nothing about. Unfurling with manic adrenaline, inspirational cooperation and terrific tactics, this engrossing set piece satisfyingly showcases some of My Hero Academia’s greatest strengths.

With Shota succeeding against all odds in a showdown of his own, and Katsuki, Eijiro and Denki encountering a powerful student in Shiketsu High’s Seiji Shishikura, ‘Class 1-A‘ is bundled with more marvelous moments than a brief Goomba Stomp article can wholly delve into. Safe to say, it’s darn good.

Episode 18, ‘RUSH!‘, keeps the turbulence of ‘Class 1-A‘ rolling. As Eijiro is promptly reduced to fleshy mush by Seiji’s quirk, Katsuki and Denki remain to aid their fallen comrade and beat their aloof opponent. With Katsuki taking the helm, he bombards Seiji with explosive barrages via his newly refined ultimate move, but despite his best efforts, Seiji catches the hothead off guard and encapsulates him in his quirk, resulting in the same grossly gooey fate as Eijiro. 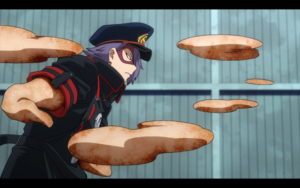 When all seems lost, Denki steps up. Rarely gifted a time to shine, he seizes his moment, using a gadget Mei crafted to trap ‘n’ zap Seiji with electrifying pizazz, allowing Katsuki and Eijiro to reclaim their original forms and thwack Seiji with all their might. In brief, the three kick ass and pass the first phase of the provisional hero license exam.

Later, the often overlooked Yuga is granted a spotlight opportunity like Denki. Overcoming his cowardice after Iida’s inspiring words, he plays a decoy for the good of Class 1-A’s ‘yet to pass’ students. Fortunately, before his selfless sacrifice spells failure for his provisional hero license exam outcome, Class 1-A rushes to his aid, utilizing the ensuing hullabaloo to bonk their opponents’ targets and pass the first phase of the provisional hero license exam (yes, everyone passes, even Yuga).

‘RUSH!‘ shines a light on the underrated heroes of Class 1-A. More good stuff’s included, such as Izuku, Ochaco and Hanta felling a plethora of rivals via a slick ploy, and Katsuki, in an out of character act, praising Izuku. Insinuating he’s aware of All Might’s involvement with his rival, My Hero Academia sneakily sows a seed that will no doubt bring about big things for Izuku and Katsuki’s rocky relationship. With the provisional hero license exam’s first phase concluding with top marks for Class 1-A, it’s time for the budding heroes to bound into the second and final phase. Simulating rescue operations, Class 1-A must wholly embrace the heroism they admire if they’re to leave with a provisional hero license in hand. 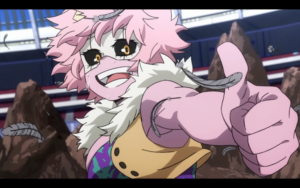 This thumbs up > all other thumbs up.