As proven by recent gaming trends, everyone loves a battle royale. So, My Hero Academia kicks off its own iteration of said event, complete with super powered showdowns, more cool characters than you can shake a stick at, and…ball throwing? Let’s back up. 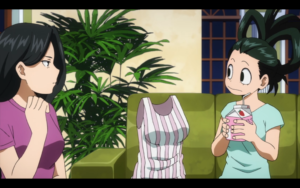 Episode 15, ‘The Test‘, appropriately lays the groundwork for the upcoming arc, introducing necessary characters and detailing the nature of students’ upcoming provisional hero license exams. As new schools and their respective students appear, My Hero Academia’s world is expanded enormously. U.A. High School is one of many promising pathways available to the budding crimefighters of society, and its reputation of quality superiority is rivalled by Shiketsu High School. Boasting its own star-studded students, Shiketsu High School will be a humongous hurdle for Class 1-A to overcome should they aim to succeed in acquiring their provisional hero licenses.

The beginning phase of the provisional hero license exam follows the aforementioned battle royale formula, where hordes of participants are hurled into a ginormous dome with an eclectic array of terrain. However, My Hero Academia’s spin on things is that participants have three targets planted on their bodies. They must throw satsuma sized material-nondescript balls at their opponents’ targets, and participants pass upon eliminating two others from the competition via their three targets being hit. 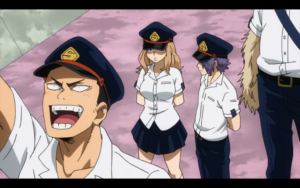 Outside of preparation for the ball bombarding battle, ‘The Test‘ offers a heartwarming scene concerning Ochaco’s developing crush on Izuku. Yet again, My Hero Academia turns on the charm via its wonderful characters and their ever blossoming personalities and relationships.

Episode 16, ‘Shiketsu High Lurking‘, brings the provisional hero license exam into full swing. Class 1-A are immediately targeted, and the ensuing chaos separates them. ‘Shiketsu High Lurking‘ shows the capabilities and quirks of Class 1-A’s plentiful rivals, from Inasa’s wind manipulation to Yo’s earthquakes. Izuku has a peculiar run-in with an Ochaco duplicate, whilst Katsuki and Shoto head off alone, a choice that brings disaster to Shoto as he becomes the target of a rival school. 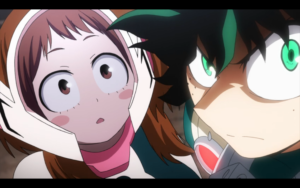 I’m forever rooting for these two to become a couple.

All in all, conflict is plenty. With lots happening, ‘Shiketsu High Lurking‘ appropriately begins the provisional hero license exam, whilst manifesting the foundations of further turbulence in weeks to come. Shoto’s back’s against the wall, and Hanta’s teaming up with Izuku and Ochaco is a pleasant surprise, bolstering My Hero Academia’s excellence in devoting ample time to side-characters.

There’s no doubt that the future of My Hero Academia’s provisional hero license exam will be chock-full of grandiose set pieces. After a stellar start, things will probably only get better in Class 1-A’s turbulent test of talent. 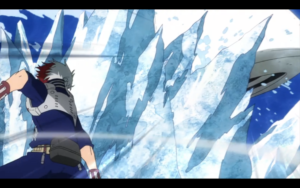 Despite his competence, Shoto’s in a tight spot.