It’s all come down to this; All Might is facing off, toe to toe amongst the rubble of obliterated buildings, against his long standing nemesis All For One. As the fierce burning of One For All is extinguished from his very soul, can All Might find one final fragment of strength to fell the villainous tyrant standing before him, and how will society react in the aftermath of such a vicious showdown? 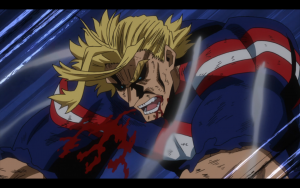 Episode 11, “One For All“, sees the iconic hero’s grip over his quirk drastically loosening. As his muscular form evaporates, All For One gains the upper hand, taunting his rival. Insulting All Might’s master, Nana Shimura, whom All For One murdered in a previous battle, the once brass-bound will of the symbol of peace is torn asunder. Reduced to a quivering husk, a sense of helplessness enveloping him in the presence of the most heinously powerful villain, all seems lost for All Might. However, as a result of the outpouring of support received from both the public and heroes, All Might musters the power to pour the diminishing dregs of One For All into a final attack. As he bellows “United States of Smash!!!”, a conclusive punch collides with All For One, spelling the curtain call of the turbulent battle, alongside the end of the mightiest hero’s era of peace. All For One is incapacitated and imprisoned, and All Might has retired.

Farewell One For All.

Fully loaded with engrossing backstory concerning Nana Shimura and Tomura Shigaraki, alongside a hefty dosage of emotional punch as All Might hangs up his cape, “One For All” delivers heaps of emotional weight. Whilst it fails to rival the furious adrenaline that All Might verses Nomu so fantastically achieved (on account of All Might verses All For One being a mental battle more so than physical), its execution is superb regardless. And whilst a further episode showcasing the struggle between the opposing tour de forces would have been welcome (affairs feel ever so slightly brief for such a long anticipated and narratively significant bout), All Might verses All For One is a grandiose face off of gargantuan proportions regardless.

Episode 12, “End Of The Beginning, Beginning Of The End“, concerns the aftermath of such a monumental event in heroism history. Media buzz is in the air surrounding All Might’s true form and battle with All For One. As Principle Nezu states his intent to implement dormitories into U.A. High School, Toshinori (All Might) and Shota are tasked with meeting Class 1-A’s parents and convincing them “Could your son/daughter come and live at U.A. High School, despite that they’ve almost died on several occasions whilst under our tutelage?”. Safe to say, they encounter resistance, most notably from Izuku’s mother, who’s growing concerns regarding Izuku overflow as she talks with Toshinori. Contrasting this sincerely emotional conversation, meeting the families of Kyoka and Katsuki offers bunches of comic relief, alongside interesting insight as to these character’s backstories and home lives. 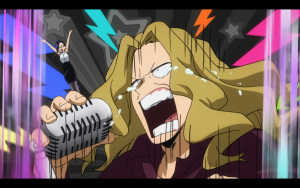 The parents of Class 1-A are an eclectic bunch. 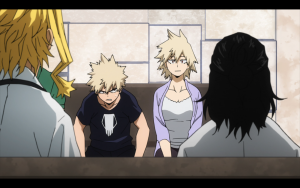 The king of scowling.

“End Of The Beginning, Beginning Of The End” serves up a helping of both amusing tidbits, alongside more serious exploration of character’s concerns, including Izuku’s following his idol’s retirement. It exists as a necessary breather following the bombastic bombardment of intensity in episodes prior, and aptly sets up the future of U.A. High School and its students. As My Hero Academia’s third Season reaches its halfway point, the quality continues as consistently stellar, its occasional faults never rising above a nitpick.

You can watch My Hero Academia on Crunchyroll HERE.

Anime Ichiban welcomes our anime waifu overlords, old and new. Join Matt and Kyle this episode as they discuss the return of the Goddess of Anime, Haruhi Suzumiya herself, then hop on over to the new virutal sensation that’s finally sweeping English-speaking nations: Hololive Vtubers!

For this episode of Anime Ichiban, the SHITSUMON! topic will have the duo diving into recently released Aggretsuko Season 3 and The Great Pretender and explore how the two shows work with mature themes.

Anime Ichiban 32: The Art of Following a Formula

Corporate shakeups and Galapagos Syndrome spell omens of a changing global landscape for the anime industry.

Corporate shakeups and Galapagos Syndrome spell omens of a changing global landscape for the anime industry and that the crew digs into along with how a series can effectively perform within its genre conventions.

‘One Piece: Stampede’ is an All-Star Behemoth Buckling Under Predictability

Does One Piece: Stampede sail all the way to Laugh Tale, or remain anchored in an East Blue of mediocrity?

As the fourteenth film in Eiichiro Oda’s One Piece saga, One Piece: Stampede was released in 2019 to critical and financial success. As a big-budget commemoration of the anime’s 20th anniversary, Stampede has lots to live up to, from successfully stamping a momentous two decades, to satiating the hype of a passionate global fanbase. Does it sail all the way to Laugh Tale, or remain anchored in an East Blue of mediocrity?

The Pirate Fest, a grand gathering of the sea’s most infamous individuals, is underway! At the festival, the Straw Hats compete with their Worst Generation rivals to retrieve a treasure of Gol D. Roger. But behind the scenes, festival organiser Buena Festa and legendary pirate Douglas Bullet are scheming something sinister.

Cutting to the chase, One Piece: Stampede soon kicks into an all-out battle against said Douglas Bullet, with Luffy working with friend and foe alike to fell his opponent.

Much like Dragon Ball Super: Broly, also animated by Toei Animation, each frame of One Piece: Stampede is a treasure to behold. Fluid animation and colors spell eye-candy magic, and the odd bit of 3D animation isn’t (too) visually jarring.

One Piece: Stampede nails its mission statement of lightning-paced popcorn entertainment to a tee. Goofy shonen films don’t have to transcend ‘awesome action and silly superpowers’. Rather than shooting for the moon and coming up short, Stampede settles for smashing the sky. With white-knuckle fights and satisfying character moments conveyed with a zippy pace, One Piece: Stampede assuredly brings what fans want. And whilst not as developed or memorable as other film baddies (One Piece: Strong World’s Shiki or One Piece: Z’s titular Z), Douglas Bullet is terrifyingly tough enough to tick the boxes.

Whilst the ‘playing it safe’ ethos of One Piece: Stampede succeeds on the surface, the imaginative innovation of One Piece: Baron Omatsuri and the Secret Island is missing, and the excess of characters prevents the possibility of channeling the simplicity of One Piece: Dead End Adventure. Stampede works as anniversary celebratory bombast but isn’t the series’ smartest, and with the core of the film occurring in a single spot and under dull skies, location fatigue rears its head.

For some, the draw of One Piece: Stampede is its constant character cameos. From the instantly recognizable to the deep cuts, it’s a fun gimmick for fans, although the absence of big names like Kuzan and Jinbei are noticeable. Some cameos fall on the side of groan inducing-ly forced, shoehorning a requisite Zoro fight, or overtly shouting to audiences “Remember them?!” Having no effect on the story, these cameos are clunky and break narrative immersion.

Far from the worst of One Piece’s wildly varied films, Stampede is what it needs to be. It lacks the creative spirit of One Piece’s heights and is dampened by its inconsistent cameo execution, but it’s a fine anniversary celebration for one of manga and anime’s, if not the world’s, best works of fiction. For the uninitiated, it’ll be like an avant-garde acid trip, but for those clued-into Luffy’s antics, it’s a barrage of ballistic glee!