As everyone’s favorite class of heroes recovered following a traumatically deadly training camp, a minority of them put into action their master plan to rescue Katsuki from the League Of Villains’ clutches. Simultaneous to this, All Might, Endeavor, Best Jeanist, and bundles of other pro heroes begin to raid the League’s long hidden hideout. In a nutshell, lots’a cool stuff’s happening as per usual. 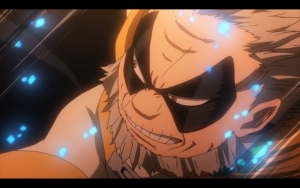 Episode 9, All For One, contributes much welcome character development to Katsuki, often regarded as My Hero Academia’s ‘I hate that guy’ character. As he rejects with conviction the League Of Villains’ attempts of villain-izing him, he proclaims his unyielding dedication to heroism, and his continued idolization of All Might, My Hero Academia’s ‘I love that guy’ character. Contrasting against instances where Katsuki has displayed meager respect towards the number one hero, the expression of his true feelings in the face of danger serves to further cement him as a character boasting a no doubt lengthy, but engrossing road of personality development ahead.

As rescue operations for Katsuki enter full swing, viewers are treated to both scarcely featured and new stars, including Kamui Woods and Edgeshot, alongside favourites in All Might and Gran Torino, kicking up a storm in attempts to restrain the League Of Villains with haste. Endeavour and the police provide fundamental backup, whilst Mt. Lady, Best Jeanist, Tiger and company secure the nearby Nomu factory. Affairs are smooth sailing, until the sudden appearance of teleportation portals, whisking away the previously restrained villains and bringing an army of vicious Nomus to apprehend the heroes. Struggling to fend off their new found opponents, their backs against the wall, the pro heroes are driven into a tight spot. Finally, when situations seem at their bleakest, those residing at the Nomu factory (alongside Izuku and friends) find themselves face to face with not only the culprit of the Nomu attack, but All Might’s sworn nemesis of outrageous power: All For One. My Hero Academia has dealt its heroes a rough hand yet again, but I’ll be damned if it’s not entertaining as hell. 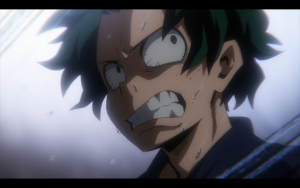 Um, are you feeling okay Izuku?

Episode 10, Symbol Of Peace, initiates All Might’s confrontation with All For One, a long awaited bout between two astonishing forces. Upon Katsuki being saved as a result of Izuku’s bonkers intelligent ploy, the number one hero charges his rival at full pelt, but still fails to gain the upper hand due to All For One’s immeasurable capabilities, alongside his utilization of a dirty trick or two. Gran Torino’s support of All Might, his ex-student, from the side lines makes for pleasant character interaction, and All Might’s immediate apology and sense of guilt upon accidentally swinging a punch into Gran Torino (the outcome of a cruel tactic by All For One) highlights both the deep care and respect All Might bears for his former teacher, alongside simply how monstrously wicked All For One truly is.

Of course, All Might’s showdown with All For One is only just getting warmed up. Despite his weakened state manifesting already, the symbol of peace more than likely has a few nifty tricks up his sleeve in order to reign victorious. My Hero Academia has ignited the fuse for a tremendous clash of gargantuan proportions, but can it deliver upon its bombastic foundations? 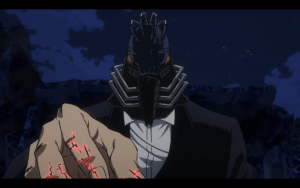 All For One: Bad boy supreme.

You can watch My Hero Academia on Crunchyroll HERE.

How ‘Persona’ got a Rhythm Game – A Short Index/ATLUS History