Welcome to the final installment of Hottest Hero Happenings.

Episode 23, “Deku vs. Kacchan, Part 2” propels itself into the punch (and kick) out between Izuku and Katsuki. The two rivals duke it out, with an outpouring of anger and grief soundtracking their blows. Katsuki blames himself for All Might’s retirement, and despises Izuku, whom he has long perceived as pathetic, surpassing him. Katsuki’s attitude is rotten, but sympathy for the hostile hothead is easy to find regardless. Combating his inner demons, Katsuki is shifting from a pseudo-antagonist to one of My Hero Academia’s most relatably flawed characters. 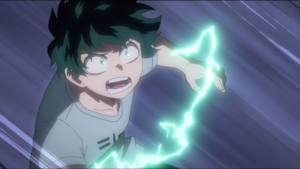 The bout’s outcome is close, but Katsuki edges a win. All Might arrives post-battle and fills in the blanks for Katsuki concerning his deduction about One For All/Izuku’s quirk. He, alongside a privileged few, is now privy to top secret information. This turn of events will no doubt shake up the complicated relationship between Izuku and Katsuki further.

Upon arrival back at their dormitories, Shota unsurprisingly dishes out strict punishment to Izuku and Katsuki for breaking curfew and fighting. Busted! 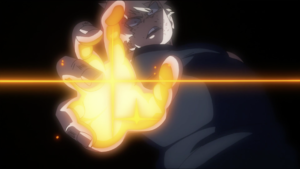 Episode 24, “A Season For Encounters”, opens ominously. Villain Twice goes about his day, enjoying in his morning cigarette, strolling about the city, observing heinous crimes as an apathetic onlooker, and noting society’s unrest following All Might’s retirement and concern about his replacement, Endeavour. Despite Endeavour’s crime busting prowess, the fiery fellow’s a bona fide super jerk who’s rudely aloof personality negatively contrasts the buoyant charm All Might jovially flaunted.

Explaining his backstory, once upon a time Twice used his quirk to create clones of himself. These clones acted as servants, but the best-laid plans of mice and men often go awry. Before long, said clones grew sick of servitude and initiated a bloody battle for supremacy that Twice’s original form got caught up in. One iteration of Twice survived the skirmish, and whether it’s his original form or an ex-servant clone is known not even to him. Bloody hell, that’s rough!

Venturing to lighter territory, U.A. High School holds its opening ceremony. Principal Nezu declares the first year students will take their Internships early due to the prevalent threat of villains. Back in class post-punishment, Izuku and Class 1-A (except Katsuki, who’s serving a fourth and final day of house arrest as sanction from Shota) are greeted by The Big Three. They’re the elite third year students standing as U.A. High School’s best of the best: Mirio Togata, Nejire Hado, and Tamaki Amajiki.

Episode 25, “Unrivalled”, brings Season 3 to an exciting (albeit abrupt) close, that most prominently sets its sites on bricklaying for Season 4. As The Big Three have difficulty divulging the details of Internships on account of their peculiar personalities (a humorous juxtaposition to their outrageously high power levels), the strongest of them, Mirio Togata, opts to battle Class 1-A as a means to highlight his strength, acquired in part due to expertise from his Internship. “It’s the most rational to have you all experience our experience first hand, right?”, he declares to the startled Class 1-A. So without further ado, the budding heroes gear up and gather in a training room before Mirio instructs them “Right, you can come at me anytime, from anywhere. Who’s first?”. 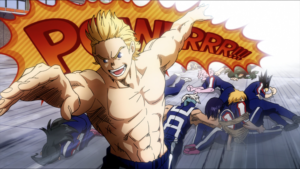 What reeks of ego manifests as well founded confidence as Mirio utilizes his phenomenal quirk and slick skills to make short work of Class 1-A, felling their strongest fighters with effortless ease. His quirk, Permeation, allows his body to become intangible. He can travel through walls, people, and even the ground. As he elaborates on the nuances of his quirk, he explains his teleport-esque disappearing into the ground. “I fell underground. And then, when I release my quirk while I’m falling, something strange happens. Apparently, things that have mass can’t overlap, so I get repelled. In other words, I get repelled to the surface in an instant.” Minor details like this aid in bolstering the believability of a character’s quirk and allow My Hero Academia to indulge in its colorful creativity.

My Hero Academia bares no shortage of imaginative quirks.

When Mirio activates permeation throughout his entire body, his clothes fall off, leaving him stark naked. I recollect a Crunchyroll comment stating they’d hate him to be nude in Season 4 too. I say, to challenge the homophobia and sexual insecurity of petty individuals, have Mirio strip off as often as possible. A little bit of comedic nudity never hurt anyone, and given the nudity in question is male, it challenges the abundance of female nudity and sexualization in anime and manga. 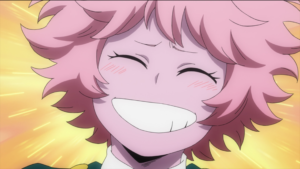 Mirio’s character is fascinating, funny, and freakin’ powerful. He’ll no doubt play a bigger role, alongside both other members of The Big Three, in Season 4. As My Hero Academia takes its final bow, it alludes to what’s to come, including mysterious new baddie Overhaul making contact with the League of Villains. Wrapping up a wonderful Season that reaffirms My Hero Academia as worthy of its thunderous hype, all eyes are on Season 4, which will no doubt be just as perfect.