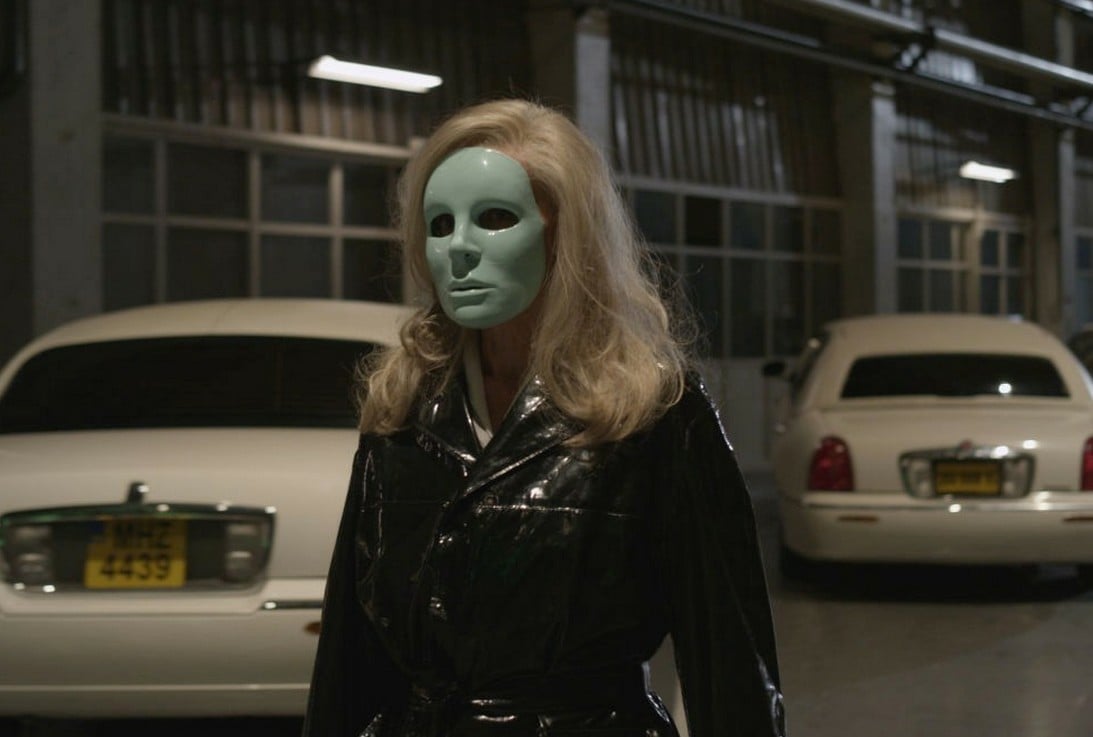 How many decisions do we actually make in a day? And how many of those decisions are actually based on reaction, habit, or what is expected of us?

Raising more questions than answers, Holy Motors is open to interpretation, and any preconceptions you may have before going in will be eliminated by the opening frames. In this trip of a movie, we follow Monsieur Oscar (Denis Lavant) – a shadowy figure who drives around the streets of Paris in a stretched out limo as he prepares for a series of appointments inhabiting characters that occupy differing lives; a beggar, a motion capture performer, a cannibalistic street leprechaun, a businessman, a family man, a gangster and even an elderly man about to die. When asked what makes him carry on, Oscar simply replies, “The beauty of the act.” All the world’s a stage; we are all like actors, playing different roles in our everyday lives. Most of us hide behind a facade and live by routines. Oscar gives us performance after performance through the city of lights, resolutely headed nowhere. His various tasks are left wide open for interpretation but the film reads like a parable for the roles we play during various stages of our existence. Is there any difference between us and Monsieur Oscar? Writer/director Leos Carax dreams up a strange, horrific, heartfelt mind-fuck of a film and one that toys with the theoretical basis of cinema itself.

The connection between dreams and films has been long established; Fellini once said, “Talking about dreams is like talking about movies since the cinema uses the language of dreams; years can pass in a second and you can hop from one place to another. It’s a language made of images, and in true cinema, every object and every light mean something, as in a dream.” In Holy Motors, the director makes a brief appearance, at the start of the film. Awakening from his sleep, he wanders out of his bedroom unlocking a barricaded door using a key fleshed into his index finger. He twists the key, middle finger in focus as if to say “fuck you” to the audience. The door opens and he walks through a dimly lit corridor that leads him in the midst of a sold out movie theater. It’s a dreamlike introduction that sets the tone for a succession of vignettes, a series of fantasies within fantasies and stories within stories, all punctuated through increasingly absurd set-ups that blur boundaries between life and art, acting and living, cinema and dreams.

The dream metaphor for film viewing is one of the most persistent metaphors in both classical and modern film theory and nobody knows this better than the French who through the years have written countless theories on the topic. Carax challenges our expectations of the narrative by indulging us in something else, a bizarre glimpse of the behind-the-scenes mechanics of the dream world. Holy Motors is the product of an expansive vision; it is ecstatic, provocative and a loving tribute to cinema as well.

In a sequence midway through the film, Oscar tells his colleague. “I miss the cameras. They used to be bigger than us, then they became smaller than our heads, and now you can’t see them at all.” Apart from the obvious reference to Gloria Swanson’s Norma Desmon, Carax is making a statement. From the overture, he angrily points the finger. Homes are being transformed into cinemas, and we have surrendered so completely to the virtual world, our computer is our home. Carax is no fan of current trends of modern filmmaking, opposed to digital cameras and the new verite-style ‘realism’; the director fears that cinema may quickly lose its magic.

Holy Motors is Carax’s love letter to cinema; here he summons everything from the earliest observational use of the camera to the more advanced aspects of the digital age and every adventure Oscar embarks in could be regarded as representing a cinematic genre: Drama, comedy, tragedy, mystery, thriller, erotica and even a musical. Sometimes Oscar’s roles are clearly bizarre, other times they have a touching, naturalistic quality.

Any Carax fan who saw his segment in 2008’s anthology movie Tokyo! will be pleased to know that Oscar also slips into the character known as Monsieur Merde, a goblin-like creature who runs through a graveyard-Beauty-and-the-Beast sequence, in where headstones are engraved with website addresses. Oscar crashes a fashion shoot, kidnaps a model (Eva Mendes), drags her back to his hideout, and begins to eat her hair and her money, before stripping himself bare while fully covering her beauty. An earlier sequence sees Oscar performing motion-capture scenes in a special effects studio. Wearing a fitted black jumpsuit, he dances in a darkened room with only the sensors on his bodysuit capturing the light. After various backward somersaults and acrobatic leaps, an erotic dance takes place as Oscar is accompanied by a tall, busty, beautiful blonde. It’s a visually startling scene, akin to something out of a virtual sexual fantasy. From the Hunchback of Notre Dame beggar to an accordion-rocking sequence to a musical number featuring Australian pop pixie Kylie Minogue (backed by the Berlin Music Ensemble), Holy Motors offers a tinge of melancholia and a sense of longing for a lost era of golden age cinema.

The commitment from actor Denis Lavant is remarkable. Lavant is amazing in his ability to adopt disguises and personas who are completely unalike. While Lavant’s characters are impersonal, his performances evoke strong emotional reactions and his characters are convincingly incredible and often heartbreaking. There is more in one performance here than most actors deliver in a lifetime. This is a tour de force feat by the remarkable chameleon. His Oscar deserves an Oscar, not that I think he nor his director could care for such an award.

Holy Motors is a carefully structured work of art; reflective, palpable, playful, absurd, precise and entirely engrossing. Motors is a prime reminder or why cinema is so treasured and celebrated. In this film, as in life, nothing is explained and things just get stranger by the minute. When most movies these days produce nothing but the ordinary, a movie like Holy Motors is a treasure to behold and worthy of multiple viewings (I’ve seen it three times so far). This preposterous piece of filmmaking is exhilarating, opaque and heartbreaking – a truly unique work of art, and the sort that comes along once in a lifetime. Carax’s baroque imagination leads us into our own obsession to untangle the spools of film and dream. We are never sure of what just happened, but nonetheless, we leave mesmerized.