Editor’s note: This article was originally published September 15, 2018, as part of our coverage of the Toronto International Film Festival.

After the Toronto premiere of Claire Denis’ new film, High Life, critics rushed to post about its most extreme and bizarre moments on Twitter, mostly in an ecstatic manner. Besides being a display of public awe, the early micro-impressions helpfully illustrated the difference between a good science fiction film and a great science fiction film: good science fiction finds fascinating new ways to depict things we’ve already imagined, but great science fiction is concerned with the sort of ideas we’ve never even contemplated. High Life, her first English-language feature, is a stunning achievement for Denis, one that violently expands the conventions of the genre, and further evidence of her restless vision.

Like Andrei Tarkovsky, Denis doesn’t bother with the standard details — we never find out what year her film is set in, and the very recognizable Earth flashbacks are incongruous with the dingy yet futuristic space scenes that make up the bulk of the film. In this unnamed future time, convicts on Earth who have been sentenced to death have been given the option to fly into space to participate in scientific missions. If they die, it’s not much different than their fate on Earth, but if they survive long enough they have the chance to return knowing they’ve done a service to humanity. Except that it’s quickly revealed that this is all a lie. The convicts will never return to Earth, either because it’s not feasible, or because they’re no longer wanted.

Robert Pattinson adds another adventurous role to his resume as Monte, who has been imprisoned since he was a young boy. It’s not giving anything away to reveal that he is the lone survivor of a drifting spacecraft — well, him and a young baby. The ship has sailed for years toward the nearest black hole to Earth; the mission is to determine if there is a way to harness energy from the sucking maw. There used to be many other crew members, including a scientist (a wonderfully eerie Juliette Binoche) who performs fertility experiments on the convicts, an impetuous young woman who becomes her guinea pig (Mia Goth), and a laid-back prisoner who seems resigned to his fate (an underused André Benjamin).

Like Kubrick, Denis delights in the slowness of life in space; she wants us to consider every extended moment and what years of this repetition could do to a person. 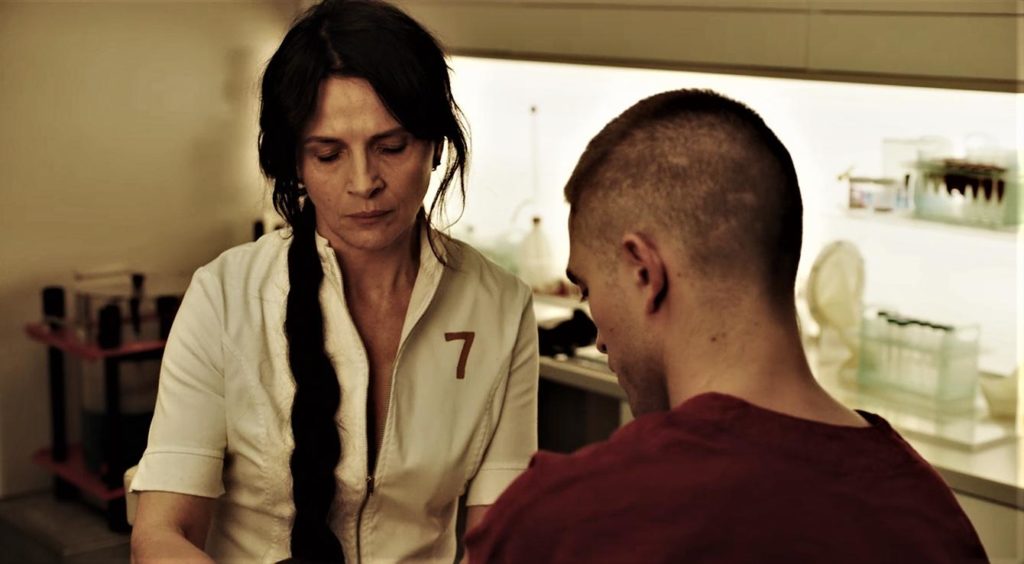 Denis’ vision of space travel in High Life has clear connections to the grungy design of Alien (1979). The equipment still works fairly well, but in a few years things will look as beat up as the interior of the Nostromo. Denis has also praised the work of Tarkovsky and Stanley Kubrick in interviews, and their influence is unmistakable. Like Kubrick, Denis delights in the slowness of life in space; she wants us to consider every extended moment and what years of this repetition could do to a person. And like Tarkovsky, she imbues her characters with great passions, but often leaves them hidden behind stoic faces that require the audience to interpret their feelings.

Yorick Le Saux’s cinematography finds great beauty in what might otherwise be an asylum of fluorescent lights, turning what could have been a very ugly film into something quite beautiful. In a scene that may have been inspired by Woody Allen’s Sleeper (1973), Binoche visits what Denis refers to as the “fuck box,” a self-pleasuring device that the crew visits to let off steam. Le Saux photographs Binoche in a faint purplish light that emphasizes her long black hair — it streams all the way down her back like a cascade of spiders. Binoche’s witch-like doctor seems more humane in the fluorescent light when she carries on her fertility experiments, but in the box, she can be seen in her true light.

Pattinson, though, is clearly the star of the film, and he wisely does as little as possible in that capacity. The last few years have been filled with adventurous and remarkable career choices for Pattinson, and his great strength is knowing when to turn down the temperature. In his last great performance, Good Time (2017), Pattinson was most moving in his restrained scenes with his intellectually-disabled brother, and in High Life, he practices an even greater degree of restraint. It would be easy for an actor to pull out all the stops with Denis’ bonkers story, but it’s far more compelling when they keep the energy low, as if they have been desensitized to everything around them. 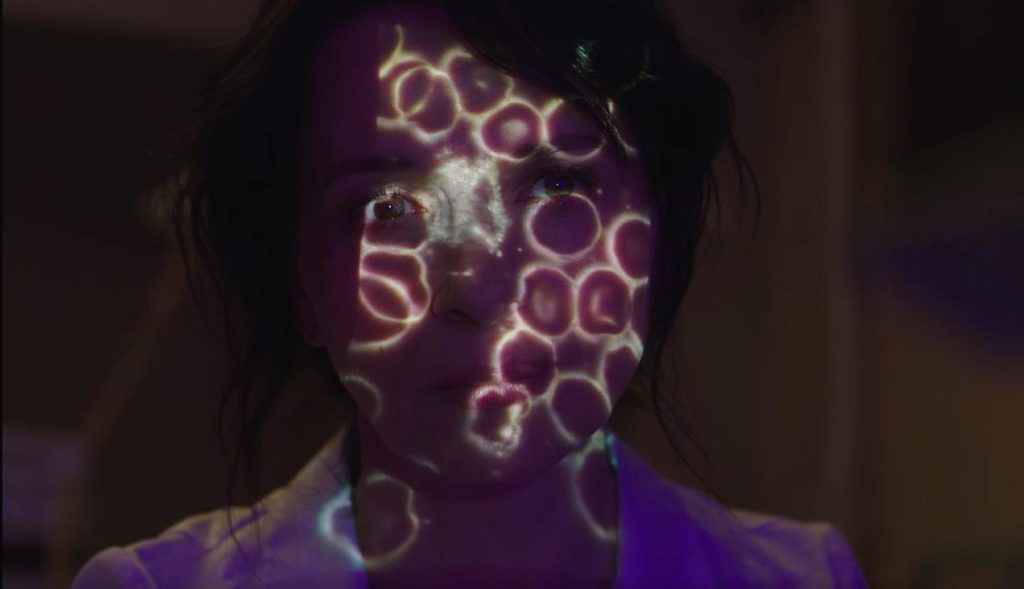 Despite the more obvious science fiction homages, the movie High Life most feels akin to is Jonathan Glazer’s Under the Skin (2013). The stories have nothing in common plot-wise, but Denis’ movie has a painful undercurrent of sorrow that occasionally peaks out above the menace, much like that film. Like Scarlett Johansson’s asexual alien, Pattinson and his fellow prisoners are starving for human connection and love. The closet Johansson got was luring lonely men to their deaths, but she never made a real connection. The prisoners in space are also desperate for connection, but they mostly resort to the sex box, and even when they do have sex it’s violent and ugly. Pattinson lives a life of chastity as if he knows the possibility of love is futile in the cold sterility of space.

I’ve seen many great films so far at TIFF, but none have made me want to watch them all over again as strongly as High Life. I just want to bathe in its cosmic glow a little longer.

‘The Reason I Jump’ Furthers the Conversation Around Autism

‘Beyond Moving’ is an Inspiring Document of Artistic Perseverance