In a coincidence that highlights the vitality of a service like Filmstruck, a print of Akira Kurosawa’s High and Low actually screened in my city earlier this year. I missed it, despite desperately wanting to knock this particular Kurosawa off my list. Were it not for Filmstruck, I’d High and Low would still be there, waiting for a Barnes and Noble flash sale on Criterion Blu-Rays. Instead, I’m able to kick myself for having waited so long to see one of the Japanese master’s less-heralded masterpieces.

High and Low is comprised of two markedly different segments, though that does not mean that the film feels disjointed. On the contrary, the juxtaposition of two styles — one a chamber drama, the other a police procedural — is just one of many effective dichotomies that underline Kurosawa’s focus. Titled Heaven and Hell in Japan, High and Low is fundamentally concerned with diametric oppositions and societal stratification. Kingo Gondo (Toshiro Mifune) is a shoe company executive who lives in a modern mansion on a hill, quite literally above the jostling, slummy city below. His son is kidnapped by an envious sociopath from the city — only the stolen child is revealed to be not Gondo’s, but the son of his driver. Hell has come to find Gondo in his mansion, and the Executive — who is defined by his work ethic and financial success — must decide whether to pay a king’s ransom for his workman.

The first segment follows the aftermath of the kidnapping, and essentially unfolds in one room of Gondo’s house. Just as Hitchcock did in Dial M for Murder, Kurosawa subtly manipulates the space of the room without resorting to flashy camera moves or calling attention to his own technique. Up to a dozen characters inhabit the space at a given time, from Gondo and his wife and the driver, to a parade of detectives and officers. While the setting can scan as theatrical, with characters merely filling the space as important dialogue comes to the fore, Kurosawa uses the limitation to communicate the dynamics in the room. In frames with that feature both Gondo and his driver, the men’s postures and positions relative to the camera help reveal Gondo’s state of mind; is he going to descend into hell along with his driver, or sacrifice his soul to insulate himself in heaven? 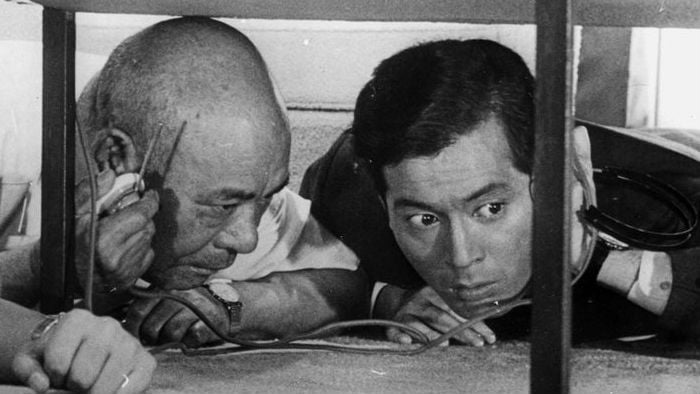 While the first hour (at Gondo’s mansion) is a morality play which interrogates Gondo’s fealty to his career, High and Low descends into the city for its second half, as cops track the kidnapper. Here, Kurosawa subverts expectations by making the cityscape — which is far more expansive than Gondo’s house — feel drastically more claustrophobic and chaotic. Even in those scenes in which cops crowd Gondo at home, the floor to ceiling windows and open layout emphasize Gondo’s privilege; in scenes that follow the kidnapper, alleyways seem to fold in on themselves surrounding teeming masses.

Kurosawa’s attention to process in these scenes is utterly thorough, with long segments in which police exchange ideas, and longer segments in which they follow every thread. The pacing is deliberate, and the effect is suspense without action; as the police painstakingly comb through a pile of leads, we feel their exasperation, and are forced to endure each of their dead ends. In that regard, High and Low deserves to be considered a precursor to investigative films such as Zodiac or Memories of Murder. It also feels like a template for a genre with far less prestige: the television police procedural. Indeed, High and Low’s structure appears to mirror the structure of Law and Order or Criminal Minds episodes, in which the attention shifts slowly from victims to the police, then eventually to the criminal. Kurosawa’s kidnapper is framed in tight close-ups that emphasize his feelings of oppression and claustrophobia, far from the wide-angles which position Gondo as the lord of his mansion.

High and Low is perhaps less ubiquitous in America than Kurosawa’s samurai films, which is inexplicable. Mifune, often Kurosawa’s wild-eyed Ronin, is a striking presence as a stoic businessman. Kurosawa’s many dichotomies in the film eventually culminate with a scene that finds Gondo face to face with the kidnapper, albeit still separated by a pane of glass — confined, after all, to their separate worlds. The epilogue is a note-perfect conclusion to the film that precedes it — a film you absolutely shouldn’t wait to see at a revival screening.

15 Years Later: ‘Master and Commander’ Veered Off the Adaptation Chart