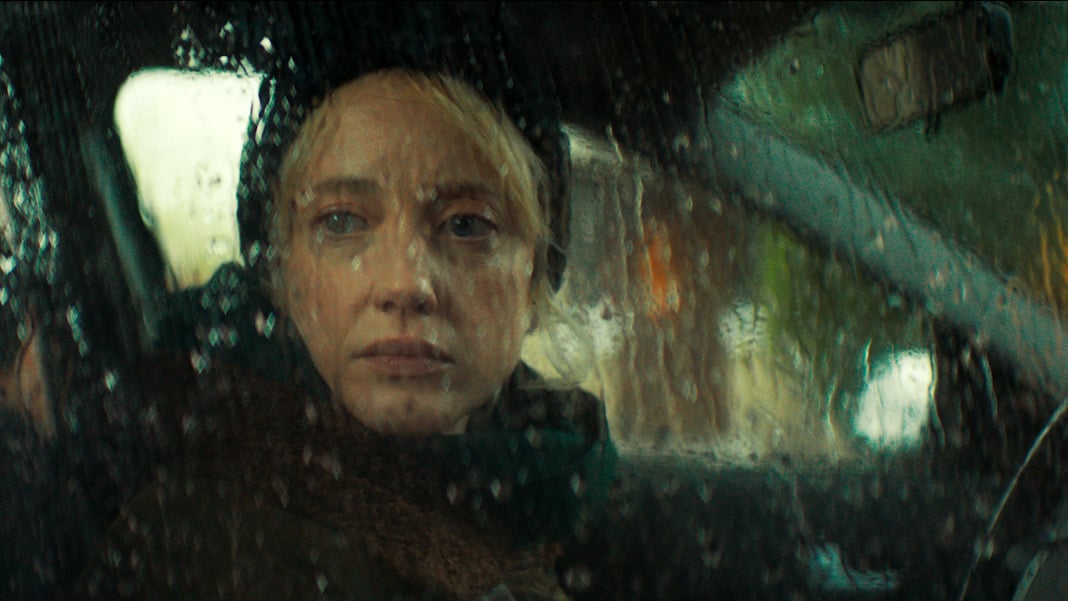 In Here Before, the chameleonic actor Andrea Riseborough stars as a mother so desperate for the return of her dead daughter that she becomes convinced a neighbor girl is her child reincarnated. The stylishly made psychological thriller takes its cues from earlier films exploring the darker aspects of grief, most obviously Jonathan Glazer’s Birth (2004). Here Before features an outstanding cast and gorgeous visuals, but it’s primarily a showcase for Riseborough’s hypnotizing performance, which is impossible to look away from no matter how painful it becomes.

Riseborough stars as Laura, a seemingly cheerful Northern Irish housewife with a white-collar husband, Brendan (Jonjo O’Neill), and a son, Tadgh (Lewis McAskie) in his early teens. It’s made clear early on that they were once a family of four, but their young daughter was killed in an accident. A lesser film would have portrayed Laura as a grief-obsessed woman living in a constant state of depression and unable to move on. But Here Before takes a wiser and more realistic approach by showing her as fairly well-adjusted; after all, many people experience that unexpected death of a loved one, and after a period of grieving most of them return to fairly normal lives. Laura shows off plenty of unforced smiles and enjoys games with her son while maintaining a strong romantic connection with her husband. Even the sex is still good.

When a new family moves into the duplex next door, Laura is delighted to see the couple have a young daughter named Megan (Niamh Dornan), whom Brendan notes is just about the age their daughter was when she died. Laura’s desire to be a good neighbor makes her give Megan a ride home from school when her mother Marie (Eileen O’Higgins) is late to pick her up. Laura lights up when the girl is in the back seat next to her son as if it was before her family’s tragedy. But her actions start to seem more questionable when she invites Megan over for dinner that night — without Marie or her boyfriend. Laura’s husband begins to worry when he notices his wife finding excuses to spend more time with Megan, but it doesn’t help that the girl seems to be developing an attachment to her neighbor. Here Before seems to be setting up a simple tale of obsession on Laura’s part, until Megan begins telling strange tales about experiences in town that she couldn’t have had, as she and her family just arrived for the first time. And some of her “memories” seem to be things that only Laura’s dead daughter could have known.

Laura’s harmless desire to relive the most superficial parts of having a young daughter is soon twisted by her fears that her daughter may have returned to live in the form of the young girl next door. Riseborough is always an intense actress, and here she’s able to convey Laura’s growing obsession without turning it into a cartoonish performance. She keeps her fascination with Megan within the realm of the plausible, which is far more chilling than if she had gone all out. It’s unclear if Laura or Megan may be in danger because of this web of intrigue they’re bound up in, but the latter third of the film is suffused with tension and dread. O’Higgins also puts in a strong performance as a mother seemingly stuck in the middle of Laura’s new bond with Megan, while O’Neill does a fine job of not making his role as the husband an afterthought.

The director Stacey Gregg, who also wrote the film, and her cinematographer Chloë Thomson, use carefully composed compositions and delicate lighting to masterfully explicate Laura’s mindset. One of the best-framed scenes of the film shows Laura and Brendan delving into her feelings about their dead daughter as shown in reflections from three bedroom mirrors on their dresser. They’re centered in different mirrors, emphasizing the disconnect between them. Even when their figures come together in a larger center mirror, Laura is still off to the side with her face cut off, to show that she doesn’t feel whole once her husband steps out of frame, leaving just a sliver of her body in the mirror. Here Before will eventually provide some answers to Megan’s strange connection to Laura, which some viewers will likely find unconvincing. But eagle-eyed audience members may have noticed little clues along the way that aren’t at all obtrusive but make it clear that the ending isn’t as slap-dash as it might initially seem. Here Before is often gorgeous to look at and incredibly assured, which is all the more miraculous because it’s the first feature that Gregg has adapted. It’s an auspicious sign of even greater things to come.

JFF 2021: Hokusai and Sumodo- The Successors of Samurai