‘Happytime Murders’ Is Too Incompetent to Be Raunchy

To paraphrase the best line from Wes Anderson’s entire career, “What everyone knows is Avenue Q created the definitive work of puppet raunchiness. What The Happytime Murders presupposes is. . . maybe it didn’t?” Directed by Brian Henson, son of Muppet-mastermind Jim Henson, The Happytime Murders is a film that thinks it’s far cleverer than it actually is. It’s a tasteless, mostly joke-free attempt to add to the ranks of adult-themed puppet content, something the people haven’t exactly been clamoring for.

The intro makes it clear that the movie is modeled after bad science fiction and fantasy films in which some otherworldly creature is discriminated against in a way that draws parallels with American racism (see last year’s Bright for a good example of the phenomenon). In this case, puppets are considered subhuman by many actual humans. They’re limited in the jobs they can do, and many of them end up homeless and in dire poverty.

One of the few puppets who seems to be holding it together is the imaginatively named Phil Philips (Bill Barretta), a private investigator who used to be a police officer. Phil’s career came to a screeching halt after he missed a puppet assailant during a stand-off, leading the police to conclude that puppets can’t shoot other puppets and fire him from the force. 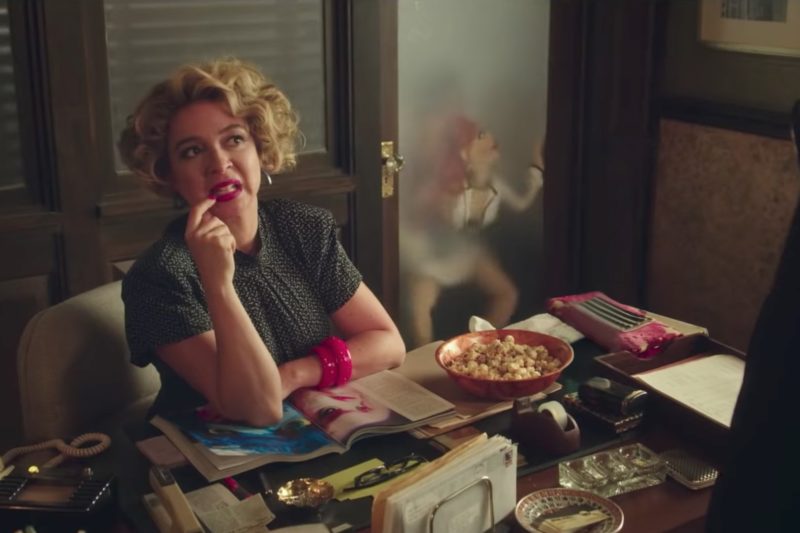 While following a lead for one of his clients, Phil gets wrapped up in a quadruple puppet homicide. The killer seems to be tracking down his former castmates from The Happytime Gang, a television show he used to star on before becoming a cop. His old partner, Connie (Melissa McCarthy), is forced to swallow her contempt and go back to work with Phil to find the person tracking down his friends.

To paraphrase the best line from Wes Anderson’s entire career: “What everyone knows is Avenue Q created the definitive work of puppet raunchiness. What The Happytime Murders presupposes is. . . maybe it didn’t?”

Phil and Connie’s investigation is hampered along the way thanks to anti-puppet discrimination, both from Connie and their suspects. Usually, when films take this approach, it’s meant to stand in for anti-black racism, but it’s questionable choice. Racism is still alive and well, so why not make an actual film about it instead of turning everything into a ridiculous allegory? But Happytime Murders doesn’t even seem that committed to those allegorical aspects. Henson and his screenwriter, Todd Berger, mostly abandon that angle after the movie’s first half hour. Also, the whole comparison doesn’t even make sense, as though racial groups are routinely considered subhuman, puppets quite literally are subhuman. This misguided attempt at social critique is a devastating self-own, one that the filmmakers should have wisely ignored.

But even beyond its offensive fake-wokeness, Happytime Murders simply isn’t funny. The film is an endless litany of jokes that don’t land. Barretta takes much of the blame for this; he has a great gruff police officer persona going, but his comic timing is weak. Strangely for a puppeteer, he doesn’t act in the heightened style that’s necessary when you’re not on screen. His endlessly dour character is merely boring. McCarthy, a legitimately gifted comedian, really only plays second fiddle. She’s not a co-lead, so her talents are obscured most of the time, while Berger’s jokeless screenplay doesn’t do her any favors either. Even in the rare instances when something funny lands, such as a driving scene where Phil and Connie have an altercation over what’s playing on the radio, they ruin the joke by letting the characters in on it. Nothing kills a gag faster than having actors laugh at it themselves — something fairly common in bad TV sitcoms, where audience laughter can help cover it up, but it’s unfortunate that Berger falls into such an easily avoidable trap.

Related to the lack of humor is the utter drabness of the visuals. Henson has made films ranging from just fine (Muppet Treasure Island) to pretty darn good (A Muppet Christmas Carol), so it’s surprising that he would produce something this aesthetically bland. The film’s overarching color scheme seems to be based around concrete gray, brightened only by the colored felt of puppets. But even the puppets don’t have the visual interest that usually characterizes a Muppets project. One of the most impressive aspects of Jim Henson’s creative output was that he made puppets that seemed to be alive and imbued with a soul just based on their design. There’s no puppet in Happytime Murders that gives off anything like those vibes. Even when the film at least gives us an interesting looking puppet, it’s almost always confined to the background. The only characters who get lines are featureless human replicas. 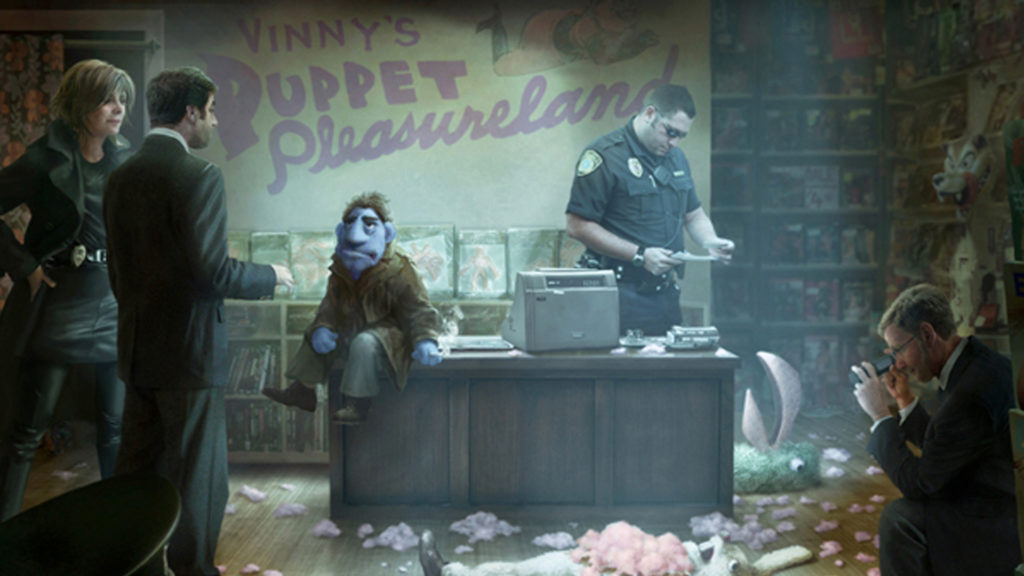 It’s hard not to think of all the opportunities Henson had to take a different approach in order to make his film interesting. There’s the possibility of a parody of private detective fiction à la Chandler and Hammet, which is teased in Phil’s relationship with his ever-faithful secretary (played by an underused Maya Rudolph). It might have even been more interesting to focus on the more depraved aspects of the crimes in the style of David Fincher’s Se7en. Yet Henson always seems to gravitate toward the least-interesting possibilities for his material.

It’s not set in stone that only Avenue Q is allowed to insert puppets into the darkness of adult life; there’s room for other artists to work in that same vein. But The Happytime Murders doesn’t even try to match the originator of the dark puppet comedy, so maybe skip this one and use the movie fare you didn’t spend toward some theater tickets.