There’s been a recent trend of anime promising one thing at first glance, then skilfully diverting to a different, far more interesting thing right from the get-go. We saw this happen with last winter’s A Place Further Than The Universe delaying its advertised Antarctic expedition to the last quarter, with wonderful results. Now we have Hanebado!, a badminton anime that is less about badminton and more about coming to terms with yourself and those around you.

Hanebado! immediately differentiates itself from other sports anime with its choice of protagonists. There are two of them, and neither Nagisa Aragaki nor Ayano Hanesaki fills the typical role of a newcomer coming onto the sport for the first time. They are veterans of their craft, top of their class even, and know the ins and outs of the game. As such, the show wastes no time in thrusting the viewer into watching high-level play. This means less time spent on getting the viewer acquainted to the sport, and more time spent on getting them acquainted with the characters themselves.

There is a classic rivalry between Nagisa and Ayano; one who polished her skills to a sheen through hard work and one who was born with talent. It’s a dynamic that has been seen countless times in sports stories in general, not just anime, but Hanebado! manages to utilize that dynamic to its great advantage. 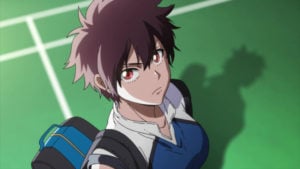 The feelings of frustration and inferiority Nagisa feels in the early goings of the series are incredibly relatable and makes it easy to not only pity her, but also sympathize with her. Unlike other shows, there aren’t many (if any) flashbacks to portray all the effort Nagisa has put into her sport. Instead, that comes through in her meticulously presented actions and attitude in the present day. The story is “showing” instead of “telling”, and that creates an engrossing narrative that the viewer doesn’t even realize is being told.

The same can be said for Ayano’s transformation throughout the series. Her transition from a lost but diligent girl to an apathetic borderline psychopath is downright chilling, and that’s due to how the show portrays her.

Ayano’s withdrawal into herself is never overplayed, something other anime are usually guilty of with characters in similar circumstances. That’s because it’s a gradual change behind the scenes. The story never draws any more attention towards Ayano than is necessary. She can still function as a sociable human being, but it’s clear to the viewer and those around her that that facade is being forced. Since no one knows how to change that though, the issue continually gets swept under the rug as life goes on, a scenario all too frequent in reality as well. 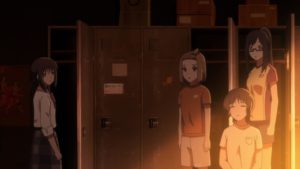 No matter the situation, favorable or not, Ayano’s condition remains at the back of everyone’s minds. This generates a palpable tension within that can be felt throughout every aspect of the narrative. It builds and builds until it finally bursts in Nagisa’s ultimate confrontation of Ayano.

This final match is emblematic of Hanebado!’s treatment of the badminton sport throughout the entirety of its run. There are no extrinsic stakes involved, and it doesn’t matter who wins the match in terms of progressing the story, which is, again, counter to the primary driving force of almost any other sports anime out there. The emotional and intrinsic stakes, however, are very real, and those are translated loud and clear to the viewer.

So much is conveyed purely through the careful animation of Nagisa and Ayano’s movements and expressions. Every smash, every shuffle, every tap of the shuttle is portrayed so precisely it becomes natural to attune oneself with these athletes’ emotions. At the risk of reciting an age-old clichè, they truly are communicating without words, and that is something more difficult to accomplish on the viewer level than many anime may lead one to believe. 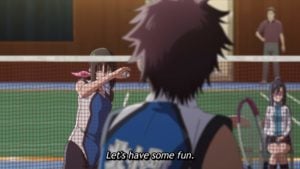 Hanebado! hasn’t accomplished a whole lot in the grand scheme of things by the end of the series. There was never really an end-all-be-all match that determined the future of these athletes in any meaningful way. No pivotal milestones in terms of special techniques learned or skills gained. Heck, there was never even a training montage at any point. In terms of plot progression, it seems like the story has hardly left the starting line… when viewed as a sports anime.

When viewed as a drama, however, Hanebado! has already finished the race in first place. The growth in character and integrity that Nagisa and Ayano demonstrate through their badminton play is astonishing. If the story was to end with this season alone, it would be complete without a medal or trophy to show for the two’s efforts. That alone is a testament to the quality of the visual story-telling on display here and is why Hanebado! stands out from the plethora of other sports anime.

You can watch Hanebado! on Crunchyroll (subbed) and Funimation (dubbed).