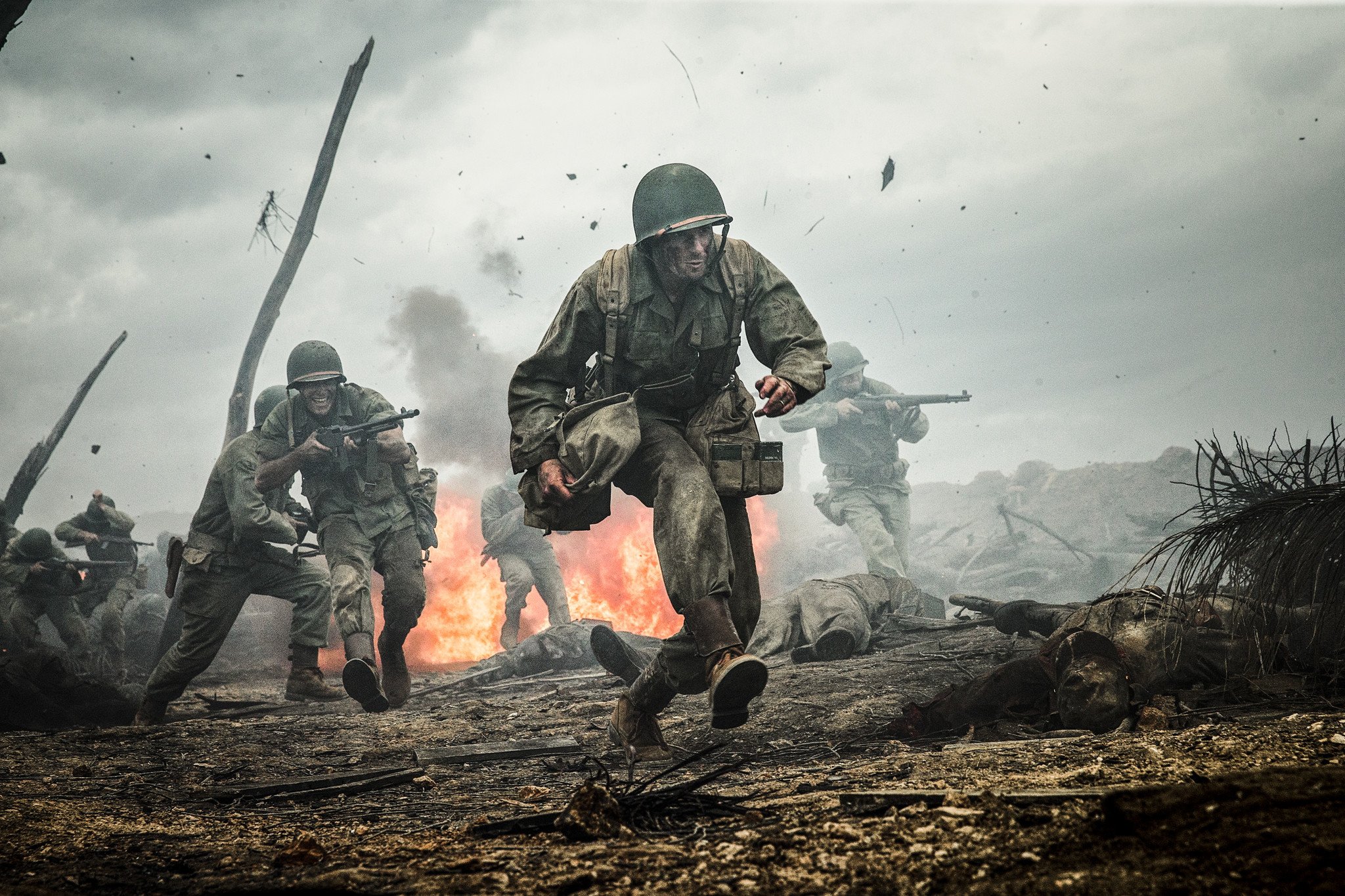 A clash between philosophies is at the heart of director Mel Gibson’s latest, the World War II drama Hacksaw Ridge, based on the true story of Desmond Doss, a “conscientious cooperator” who refused to carry a weapon but reportedly saved the lives of seventy-five soldiers during one of the most savage engagements in the Pacific Theater. The ideological struggle of a pacifist who enlists in the military and is sent off to combat is the stuff of Hollywood dreams, but watching a filmmaker who gravitates towards mankind’s inner demons do his best to curb the impulse to turn it into a total nightmare proves equally as fascinating. In the end, this restrained Gibson delivers, even through the blood-soaked lens, an old-fashioned tale of optimistic heroism, but while told with a respectable degree of craftsmanship, it unfortunately lacks the visionary ambition and dark edge of his best work. Nowhere is his self-imposed straight jacket more apparent than the Capra-esque first act, set in an idyllic Lynchburg, Virginia, where the line between right and wrong is drawn quite clearly for the young Doss, thanks to an alcoholic father, a loving mother, and a poster on the wall depicting the biblical killing of Abel by his brother, Cain. Gibson stages and shoots with an earnestness matched only by his main character, but the tight frames and stationary camera produce flat, safe images that neither offend nor absorb, devoid of any real interest or passion for what’s taking place. Only in the few brief moments of friction does the director seem to wake up, creating jarring punctuation that remind audiences of mortality and the ways humans can cause it, jolts that not only keep the energy of that opening third from taking a blissful nap, but also convey vital information that establishes Doss’ motivation for what will come. They are a reminder as to what sort of unsettling filmmaker Gibson can be when he isn’t holding back.

These early scenes in Hacksaw Ridge do contain a wholesome sincerity as awkwardly charming as it is unfashionable, however, mainly due to Andrew Garfield’s refreshingly straightforward performance. His sheepish smile, aw-shucks demeanor, and lanky frame prove a winning substitute for Jimmy Stewart, especially in his courtship of Dorothy (Teresa Palmer), the kind of ethereal creature many soldiers must have built up in their minds and fantasized about coming home to. Desmond is an easy personality to root for, and Garfield’s ability to convey this both serves him well here and pays dividends later. It’s enough to get through the storybook home life, but because Gibson doesn’t allow himself to explore potential conflict, this superficial beginning never actually takes hold.

Though the binds loosen a bit when the setting shifts to boot camp and the consequences of Doss’ convictions begin to materialize, the effort to stay true to the traditionally reverent tone of the material, while admirable, guts the film of any potential complexity and prevents the strengths of its helmer from unleashing his personal take on the horrors of war, a handicap that eventually lessens the impact of the incredible sacrifice at the center of the story, making it come across far closer to typical Tinseltown than awe-inspiring reality. Without his usual themes to work with, Gibson does his best to walk the straight path, but the film never gets comfortable in its own skin, never completely embraces the stiffness.

Balletic combat choreography, with slow-motion fiery streams cascading over exploding earth and bodies becoming the visual equivalent of a beautifully sad symphony, conflicts with sequences more at home in a John Wayne or even John Rambo film, dissipating their power. The action staging, normally one of Gibson’s strong points, also lacks coherence (and not in that intentional “war is chaos” kind of way), flipping back and forth between claustrophic close-ups and messy panoramas that offer few clues as to the layout and positioning of the armies on the field. Because of this, too often the thread is lost, and what should be awful and awe-inspiring becomes cinematic noise.

Yes, the fighting is ferocious, filled with all the splattering brains and exposed entrails modern audiences have come to expect from the genre, but even with the opportunity of a large-scale battle with which to burst forth from his shackles, Gibson continues to fight himself, pushing no boundaries and depiciting very little unexpected, despite the sense that he desperately wants to. While offering copious amounts of gore, the film rarely lingers on it, as if wanting but unsure whether to risk disturbing audiences by hammering home the barbarity. The violence of Hacksaw Ridge seems as confused as its creator about what the purpose is, and thus its effectiveness is neutered.

Instead, it’s the quieter moments that prove the most memorable ones, revealing shades of what Hacksaw Ridge could have been. The masterful depiction of troops ascending Hacksaw’s rocky cliff is thick with a fear and dread missing from the rest of the film, and imagery derived from the paranoia of resting one’s eyes for even a second terrifies more potently than any of the multiple losses of limb ever could. Odd inclusions pepper throughout as well, including a particularly strange depiction of a certain Japanese element that has no thematic place, does not belong, yet nevertheless is stunning. These bits offer a peek into an alternate dimension, one where Gibson roamed free, able to take us on whatever weird journey he wanted. Instead, we end up with this solid, likable, yet rarely captivating, version of an incredible true story. The pairing of a genre ripe for plumbing the philosophical depths with Mel Gibson’s penchant for violent expressionism could have been a match made in dark cinematic heaven, but his determination to suppress any demons and deliver it straight ultimately feels like a betrayal of self that conflicts with material espousing the virtues of staying true to oneself. The events taking place in Hacksaw Ridge are themselves worthy of attention, but perhaps a different director would have been more suited to making a film that focused on nothing else.