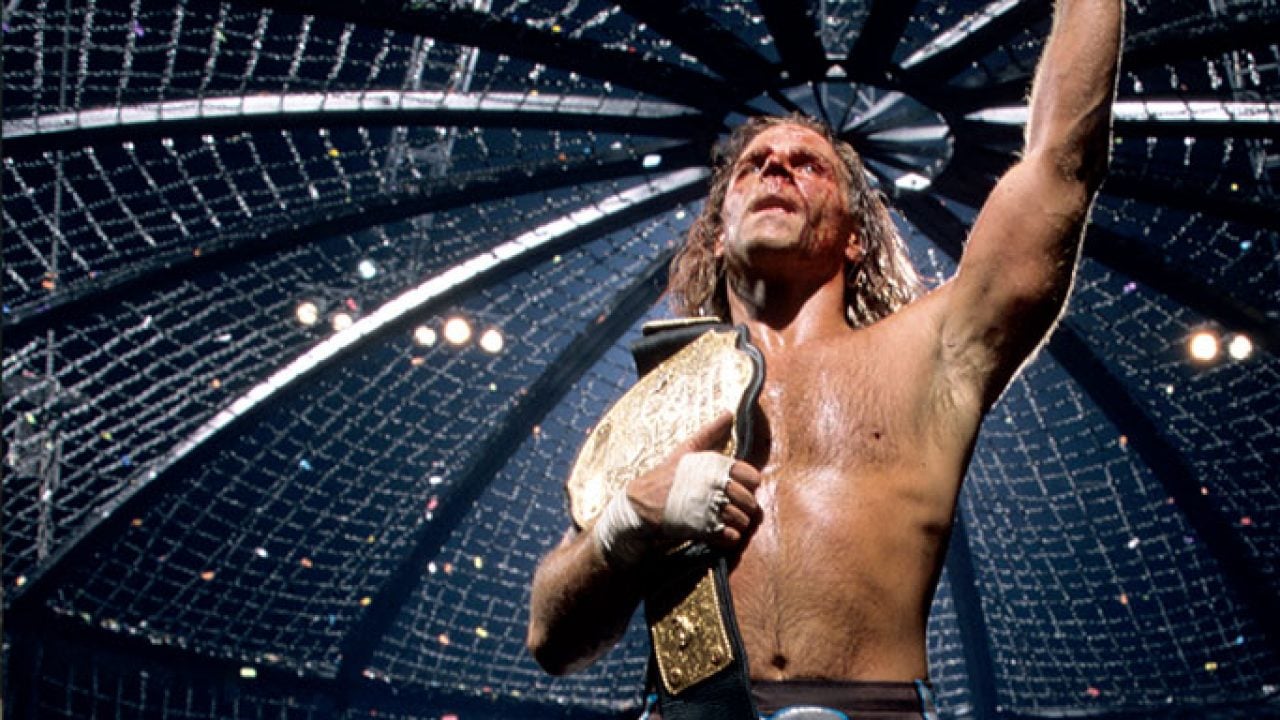 As more WCW stars were integrated into the WWF in 2002, WWF changed their name to WWE and expanded their brand by splitting their roster in half and creating Thursday Night SmackDown. It was a year of many firsts for the WWE and on Nov. 17, 2002, six of the biggest names in WWE history stepped into Madison Square Garden for a match at Survivor Series that had never been done before.

That year, the 16th annual Survivor Series took place at Madison Square Garden in New York and for only the second time in its history, the event did not have the traditional Survivor Series match on its card. Instead, the first-ever Elimination Chamber match was presented at the PPV, and it more than lived up to the hype. It wasn’t the best Survivor Series match we’ve seen but it was the first, and being the first Elimination Chamber, it was shrouded in mystery since nobody knew what to expect. It also featured Triple H, Chris Jericho, Kane, Booker T,  Rob Van Dam and Shawn Michaels who had just come out of retirement earlier that year when he made an appearance at Summerslam. After more than five years out of action, Michaels finally stepped back into the ring and he was looking better than ever. All eyes were on the Heartbreak Kid who was in the midst of a long-standing war with his former best friend Triple H.

The Elimination Chamber was presented as the brainchild of the then-general manager of Monday Night RAW Eric Bischoff (although it was originally the idea of Triple H) and would throw all six competitors into a massive cage structure made completely of steel with four chambers of plexiglass enclosed in the four corners. It was made of two miles of chain, over ten tons of solid steel and later called the most unforgiving structure in WWE history, something designed to punish the human body. Two wrestlers would start the match with another wrestler allowed to enter the match every 5 minutes.

In 2002, the WWE’s brand extension was in its infancy, and the WWE was looking for a way to maximize its popularity by having both RAW and Smackdown compete. When promoting the match, Bischoff promised that RAW’s main event at Survivor Series would be better than SmackDown’s Hell in a Cell main event at No Mercy and described the Elimination Chamber as a cross between WWE Royal Rumble and Survivor Series’ elimination process, enclosed in a cage format reminiscent of WCW’s War Games. Despite some similarities to the heyday of WCW, the Elimination Chamber match was an original idea that had never been done before, making Survivor Series that year, a must-see event for any wrestling fan.

That Sunday night, the six legends would walk into the unknown, and battle for the World Heavyweight Championship in a hellacious match where just about everything went wrong. Nobody knew what to expect, not even the superstars in the ring and it became one of the most famous matches in the career of the great Shawn Michaels. It felt messy, dangerous and improvised and that’s because, for the most part, it was. Legend has it that all six men arrived hours before the Pay Per View would start in order to try and figure out how they were going to choreograph the match and despite plenty of ideas being thrown around, all six men had to improvise since the pods did not open in the right order. It didn’t help that the chamber itself began to fall apart early in the match and couldn’t hold up against the brawl within the chamber. In an interview, Chris Jericho told ESPN, “We didn’t see it until the day of the show in Madison Square Garden. And it’s one of those things that you can tell was made by somebody who’s not a wrestling person. It was very clunky, it was very dangerous. It’s made of real grated steel — you probably could have made it out of rubber and you wouldn’t have known the difference. The walls were very stiff, and they didn’t make any noise when you hit them, so it hurts like hell.”

Triple H started the match off alongside RVD. Within the first five minutes of the match, Triple H was cut wide open after RVD smashed Hunter’s face into the steel chains of the chamber. In another early memorable moment, Rob Van Dam climbed to the very top of the Chamber and hit a devastating five-star frog splash on Triple H causing ‘The Game’ to wrestle the remainder of the match in a great deal of pain (it was later revealed that this nearly ended Hunter’s career). Chris Jericho entered next and teamed up with the Cerebral Assassin to wear down RVD. Booker T then entered the fray, followed by Kane who hit three consecutive chokeslams on Shawn Michaels, Triple H, and Chris Jericho. Jericho then eliminated Kane with a lionsault while Booker T, who eliminated Van Dam earlier, was eliminated by Jericho.

Shawn Michaels took out Jericho with Sweet Chin Music, leaving the former DX partners the two remaining survivors. Eventually, Triple H threw Michaels through the plexiglass of one of the pods causing him to bust wide open. Nearly 40 minutes in, both men were barely able to stand and it didn’t help that both men were also bleeding profusely. Triple H, who remained in the Chamber all the way through to the end, looked to be the winner when he hit a Pedigree on Shawn Michaels. The match looked to be over, only Michaels kicked out of the pinfall, avoided another Pedigree— and in only his second match since coming out of retirement, ‘The Heartbreak Kid’ hit his famous Sweet Chin Music and beat Triple H to win the World Heavyweight Championship. It was his fourth World Title the last World Title that Michaels would win.

The 2002 Elimination Chamber is hands-down one of the greatest matches in the history of Survivor Series and the best Elimination Chamber match that I’ve seen. Of course, it helped that it was the first-ever Elimination Chamber since nobody knew what to expect, and even more impressive is how the entire finish was said to be improvised (perhaps explaining why it took Triple H so long to try and pin HBK). Of course, it also helps that Shawn Michaels, arguably one of the greatest wrestlers of all time, was not only a participant but the winner, something he definitely deserved. It’s a truly special moment in the history of the WWE and proved that despite the career-ending injury, HBK was still better than most in the ring.

Editor’s Note: This is part of an ongoing series. You can find all the entries here.

‘Red Lantern’ Review: A Rough Ride With Some Good Dogs