Love him or hate him, the American film director, screenwriter, producer, and actor has created some of the most iconic and memorable movie moments since he burst into the scene in 1992 with the Sundance hit Reservoir Dogs. With his recent release, Once Upon A Time in Hollywood, we have decided to put together a list of his greatest moments as both a screenwriter and director.

True Romance is cluttered with a who’s who of Hollywood celebrities. Supporting actor Brad Pitt plays a comically disconnected stoner – a barely glimpsed Val Kilmer appears as an imaginary Elvis mentor, a conscience, schizophrenic hallucination to Christian Slater’s Clarence – and Samuel L. Jackson turns up for a remarkable cameo as a drug dealer whose foul mouth gets in the way of his judgment. But of all the supporting players it is Gary Oldman who steals early scenes as Drexel Spivey, a slimy, vicious white pimp who thinks he’s black.

The movie’s best scene, bar none; the un-PC scene in which Clarence’s dad (Dennis Hopper) faces off against Vincent Coccotti (Christopher Walken), the right-hand man of Blue Lou Boyle. Walken has never been more menacing and never have racial slurs been used so well. This critic would argue that this is Tarantino’s second-best monologue (the first heard in the opening of Inglourious Basterds), and Scott’s most skilled direction.

As a romance, True Romance is sick and twisted; as an action flick it’s stylish and exciting and as a road movie it’s constantly in motion. And yet through the colourful dialogue, dry and cynical humour, and Mexican stand-offs, True Romance features some genuinely touching moments – most notably James Gandolfini’s bloody, protracted motel-room assault on Patricia Arquette’s Alabama (a scene originally trimmed for theatrical release, and later restored for video).

Perhaps the most famous image in Tarantino’s Reservoir Dogs is the slow-motion Wild Bunch credit sequence. The song, the walk, the skinny ties, and black and white suits and the ensemble of great actors make this a true classic.

The opening scenes of Tarantino’s Reservoir Dogs introduced us to the filmmaker’s signature style of dialogue as we watch the cast of thieves gather for a pre-heist breakfast and bicker over an assortment of mundane topics and the color/nickname they are assigned for the job. Not only is it a beautifully shot sequence— making the most of one single tracking shot that pans around the table— but the scene also perfectly demonstrates Tarantino’s flair for dialogue and how he masterfully sets up the entire premise while telling us what we need to know about these seven strangers.

Tarantino once called this scene, particularly the fading music as Blonde leaves and then re-enters the warehouse, as one of his proudest moments as a filmmaker. It might be one of the most recognizable scenes in film history today, but it still manages to be an undeniably effective scene. As a viewer, you have to take a step back and look at the genius that Tarantino had to not show us the most horrifying moment of the entire scene. In the years since, most movies have taken the opinion that the more gore the better, but Tarantino (and Michael Madsen, for that matter) prove that less is always more.

In opening Pulp Fiction, Tarantino offers the audience not one definition of “pulp,” but two. The first—”a soft, moist, shapeless mass of matter” is symbolic of the episodic structure of the film, which does not abide by the traditional three-act structure or follow a chronological order like most Hollywood productions— and in fact, is bookended by the same scene. The second definition refers more to the explicit content of the film, describing the lurid subject matter that follows. While Pumpkin and Honey Bunny do not appear again until the final reel, their conversation about robbing banks or restaurants, models the dialogue that reappears numerous times over the course of the plot. The first scene is not only enjoyable thanks to the back and forth banter between the couple, but it is also important in setting the tone of the entire picture.

By the time Vincent Vega and Julies Winnfield walk into the run-down apartment at the beginning of Pulp Fiction you are pretty sure these aren’t the nicest guys in the world. Jules might be a “righteous man” but by the time Samuel L. Jackson delivers his fiery, now legendary speech your initial impression of these two men is proven correct. Your pretty sure Vic and Julies are cold blood killers, and this scene shows you exactly why.

The opening conversation between Amanda Plummer’s slightly dazed Honey Bunny and Tim Roth’s casually racist Pumpkin remains one of the greatest opening scenes to any American film. But later on, Tarantino takes us to Jack Rabbit Slim’s, a faux-1950s- themed diner that serves $5 milkshakes, Douglas Sirk steaks, and has the waitress dress as Marilyn Monroe and the waiter, Buddy Holly. Veteran Los Angeles hit man Vincent Vega (John Travolta) takes Mia (Uma Thurman), the wife of his criminal boss out for dinner. This date spotlights the picture’s biggest set piece, and one of the film’s most unforgettable scenes. Before long, Mia announces that she wants to compete in the Jack Rabbit Slim’s dance contest. As the two begin cutting loose to Chuck Berry’s ”You Never Can Tell,” the dance becomes an extension of their dialogue.

Pulp Fiction: Stab her in the Heart

Vincent and Mia’s date ends in disaster when Mia O.D.’s on drugs and Vince fearing for her life rushes her to the home of his hippie drug dealer Lance (Eric Stoltz ). The pair surround the now unconscious Mr.s Wallace, give her an adrenaline injection and with the help of a black magic marker, bring her back to life.

In Christopher Walken’s sole scene in Pulp Fiction, he plays a military officer who delivers a lengthy monologue explaining how he happened to come by a prized gold watch. The speech builds carefully to the movies most outrageous punch line.

Captain Koons: “The way your dad looked at it, this watch was your birthright. He’d be damned if any slopes gonna put their greasy yellow hands on his boy’s birthright, so he hid it, in the one place he knew he could hide something: his ass. Five long years, he wore this watch up his ass. Then when he died of dysentery, he gave me the watch. I hid this uncomfortable piece of metal up my ass for two years. Then, after seven years, I was sent home to my family. And now, little man, I give the watch to you”.

The final scene of Pulp Fiction is arguably Tarantino’s best work. Not only does it connect the story thread of the mysterious Yolanda and Ringo at the diner— but it answers so many other questions first-time viewers will have while watching the film. What unfolds, sets off a chain of events that ultimately decides the fate of each and every character. Tarantino’s non-linear approach to storytelling allows this scene to not only tie in with the opening but every scene it follows. It’s a life-changing moment for Yolanda and Ringo but more importantly for Jules, who as he explains it, as a new way of thinking about life.

In 1994, four of the most celebrated American filmmakers in the independent film community pooled their talents for a four-segment anthology film titled Four Rooms. Tarantino’s segment “The Man from Hollywood” is based on an old Alfred Hitchcock TV episode, where a man bets his finger that he can light his Zippo ten straight times. Of all four segments, “The Man From Hollywood” is by far the best, if only for the whip-fast clever punchline at the end.

Jackie Brown is low on action and high on double-crosses. Unsurprisingly, the most memorable performance in Jackie Brown is delivered by Samuel L. Jackson a crime figure plotting to take out former associates. Jackson, sporting a long ponytail and stringed soul patch, is superb as the malevolent arms dealer who uses people as pawns in his deadly game. Chris Tucker making a brief cameo appearance as Beaumont Livingston is the first to fall victim to Ordell’s gunrunning operation. Ordell somehow convinces Beaumont to get into the trunk of his car. As he drives off, Tarantino follows with a beautiful long tracking shot to the other side of the parking lot where he shoots him dead. Meanwhile, the soulful sounds of Motown play on the car radio.

Jackie Brown was dubbed Tarantino’s “grown-up” movie and a love letter to blaxploitation films of the ‘70s as well as a love letter to Pam Grier. There are a lot of great moments in the movie but Ray’s heated and frantic interrogation of Jackie might be best. When Ray tells her, “I sure hope you didn’t do anything stupid, Jackie”, you can’t really tell if he’s angry, genuinely worried about Jackie, or just doing his job. Whatever the case, it manages to be a strong performance resulting in a great scene. We could use more of Michael Keaton in any movie!

Jackie Brown: Is that a Gun?

In one early scene, Jackie gets a visit late at night from Ordell (Samuel L. Jackson). It is clear he is there to kill Jackie only the tables are turned when the lights go off and somehow Jackie grabs hold of a gun catching Ordell off guard. It is just one of many great scenes in which Grier struts her stuff, outsmarts the men and delivers the sort of iconic performance she was once so famous for.

Jackie Brown is often accused of being slow which is a fair criticism. The film never speeds up and in fact, during the climax, it slows down even more. Borrowing a trick from Stanley Kubrick’s The Killing, Tarantino presents the same incident involving an exchange of money three times, from three vantage points. Each one reveals key aspects of the carefully planned maneuver and each scene is staged methodically so we only understand Jackie’s masterplan at the very end of it all. 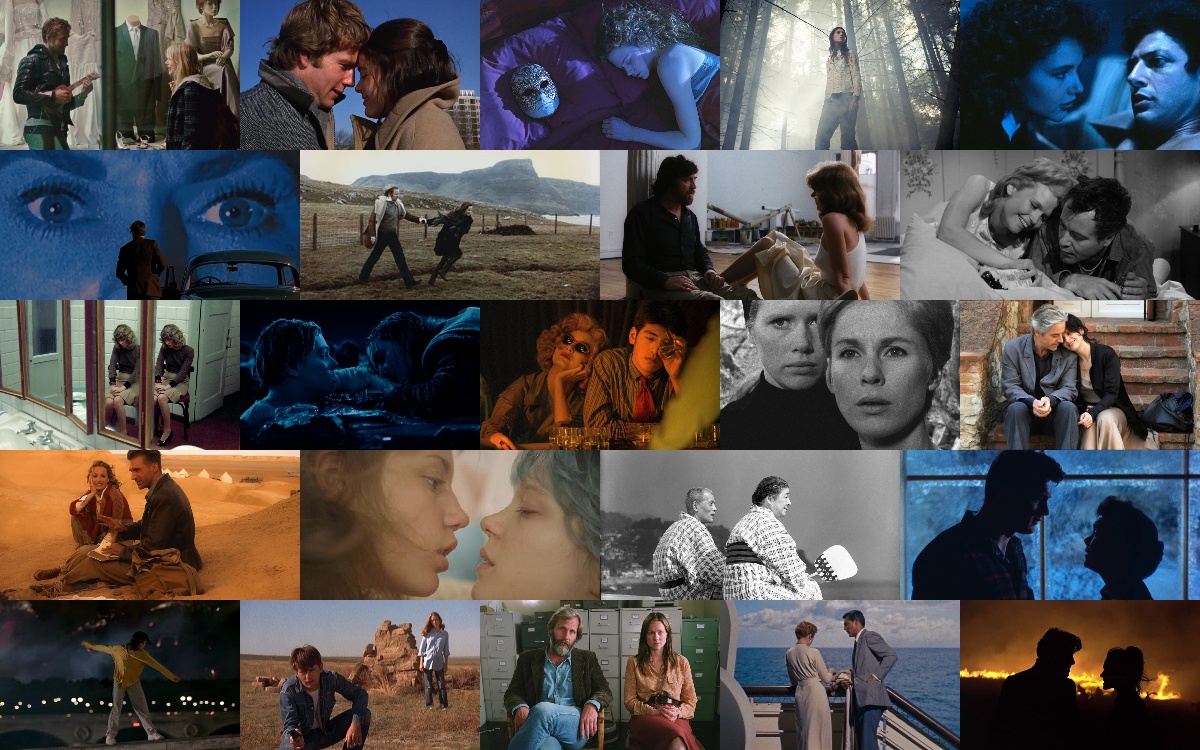 Hold the Drama! The 50 Best Movies About Relationships

The Best Relationship Dramas Part One Are These the Best Valentine’s Day Movies? In the spirit of tumultuous relationships, this list looks at the...

The Best Movie Shootouts The Mexican standoff is a recurring trope in cinema, in which several armed characters hold each other at gunpoint. In...

Shaw Bros. Spotlight On a windy, wintry night deep inside a prison cell for female inmates, with searing pain erupting through her body, a...