Golden Wind Puts the “Bizarre” Back in ‘JoJo’s Bizarre Adventure’

The title JoJo’s Bizarre Adventure suggests three things about the show itself: it will star somebody named “JoJo,” they will go on an adventure, and it will be a notably bizarre one. The anime’s four arcs so far haven’t really focused on the ‘bizarre’ word.

It’s true that the JoJos and JoJo-Bros have been on some strange journeys, with strange powers and strange characters helping and hindering them every step of the way. They’ve come across ghosts, vampires, psychopaths, a sidewalk that drags people to hell if they look the wrong way, and so much more. They’ve witnessed the introduction of, redefinition of, and total abandonment of Hamon. They’ve seen Stands that stop time and Stands that kill their user for facing the wrong way. There was even that one guy who might have been an alien. The adventures so far have not been boring.

But “bizarre” has a different expectation. Vampire masks, glowing karate, and turning doorknobs into bombs are all not things one would expect from daily life, but they’re straightforward. Bizarre suggests more incomprehensible or perplexing characteristics; less Shining Diamond and Silver Chariot, more Bites the Dust or Death 13. Stands like Heaven’s Door, which can completely rewrite parts of somebody’s personality, are a lot weirder than having lots of bug-things or regular, boring lightning powers. JoJo’s Bizarre Adventure doesn’t consistently incorporate truly puzzling, disturbing, and bizarre elements into its story. 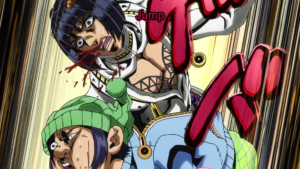 Its already obvious Golden Wind is going to change that.

In just the first two episodes of Golden Wind, there have been more bizarre things than the entirety of Phantom Blood and Battle Tendency combined. A young man, our newest JoJo, turned a stolen suitcase into a frog. This frog seemed to have its own consciousness, possibly even its own free will. A gangster with an affinity for shovels knocked himself out when he tried to kill this frog, which then turned back into the suitcase. A coconut headed man named Bruno Bucciarati punched JoJo and filled his mouth with dismembered fingers. And that was after he licked up his sweat to tell whether he was lying. All that in just the first episode. The second showed Bruno hiding inside of somebody, JoJo throwing his zipped-off arm as an attack, and a punch that caused Bruno’s senses to move too fast for his own good.

This goes far beyond “Fixing things” or “Can punch super good,” this is a whole new level madness. Only two new Stands have been revealed so far, and both of them have powers unlike anything the show has demonstrated thus far. JoJo’s “Golden Wind/Gold Experience” can turn things into totally unrelated living creatures that appear to think and feel on their own. He has the sort of power usually reserved for gods or high wizards, and he’s using it to pilfer luggage. Bruno’s “Zipper Man/Sticky Fingers” (referencing the 1971 zipper-themed Rolling Stones album) can create zippers in objects, which seem to act as both intense damage and holes where he can store things. And then he used that power to hide himself inside another human being. 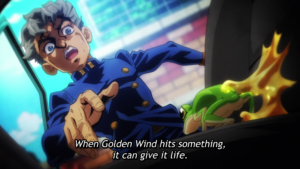 These powers are hardly straightforward; the implications of bringing a suitcase to life or entering a zipper to hide within somebody are insane. Seeing their continued use only begs more questions to be answered, not less. And due to the powers being so weird and vague in terms of ability, the show is much more interesting to watch. Seeing a Stand who can punch hard is cool, but having a less destructive and more versatile power like creating zippers or making things heavier allows for more creativity in and out of battle. Problems and enemies are tackled in unexpected ways, not just “I just need to get close enough to make their face a landing zone for my fist.”

The heightened level of strangeness in Golden Wind is not yet a good or bad thing. The arc is in its infancy and there’s no telling if Golden Wind, Zipper Man, or the myriad of still undiscovered Stands are going to make the series worse with their weirdness. It could turn the show into an incomprehensible mess where rules don’t matter and things are made up on the fly. But the idea of a new JoJo arc, especially one unbound by sanity even more so than the rest of the series, is an exciting prospect. Whether Golden Wind ends up elevating JoJo’s Bizarre Adventure or dooming it to madness remains to be seen, but one way or another the show won’t be the same from here on out.

NYCC 2018: Another Year, Another Success