GLOW is a show about some awesome ladies from the 80’s dressing up and throwing each other around in a wrestling ring. GLOW is also a show about identity, feminism, problematic stereotypes, motherhood, sexual harassment, economic inequality, and the AIDs crisis. Season 2 of this nimble half-hour dramatic comedy from Netflix nails this delicate balance like a perfectly-timed leg drop from the top rope, and it leaves you wanting more. 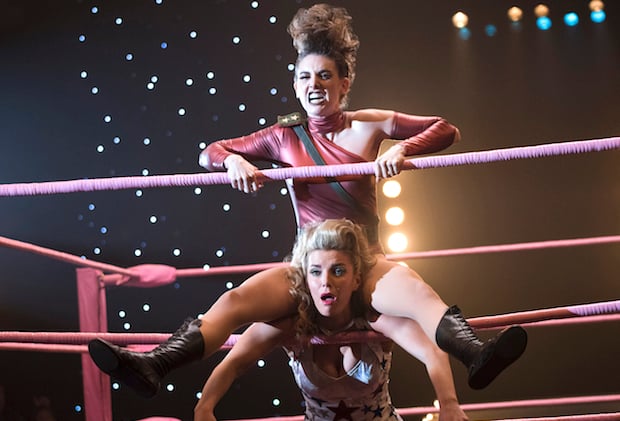 GLOW Season 1 told the tale of a group of misfit women thrown together to form a wrestling league. Against all odds, they make it work and score a season (a meta-season…a show within the show, as it were) on their local station, and they form a 1980’s misfit family while they’re at it. As said rag-tag banding-together unfolds in the wrestling ring, we’re privy to their equally dramatic lives and entanglements outside of the ring. 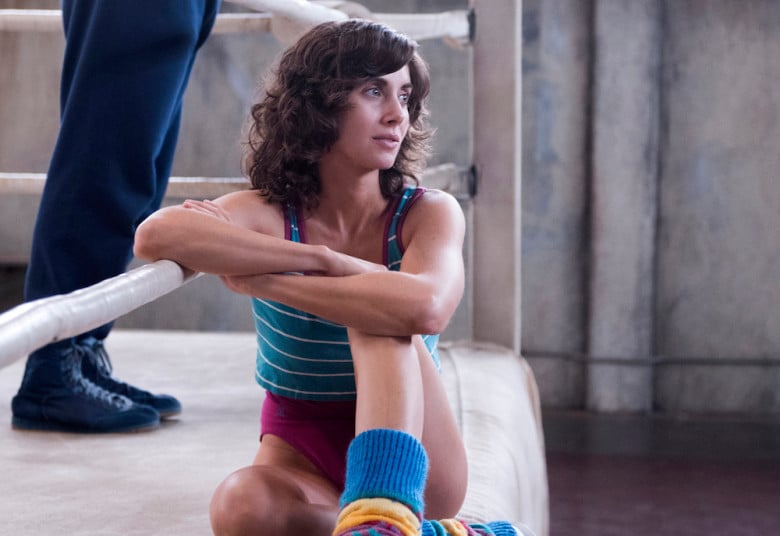 The miraculous Alison Brie stars as Ruth, the ever-capable underdog who it is impossible not to root for, and whose wrestling alter-ego ‘ Zoya the Destroyer’ is a show-stealing mustache-twirling ‘Russian’ Big Bad. In the ring, Zoya’s greatest foe is Betty Gilpin’s relentlessly all-American ‘Liberty Belle,’ whose real-life counterpart, the relentlessly alpha-female Debbie, also happens to be Ruth’s estranged and betrayed former best friend. Outside the ring, Ruth’s pitted against (yet also becoming best friend’s with) the show’s director, Marc Maron’s beloved curmudgeon/hack auteur, Sam, the talented-but-insecure coke addict whose heart-of-gold does not always shine through.

The excellent leads are surrounded by an adept and intriguing rogue’s galleries of fabulous and diverse women (and the fabulous and dear producer/color commentator, Bash), many of whom are given small dramatic arcs of their own, and all of whom have their own larger-than-life wrestling personas (I double-dare you not to fall in love with secret breakout star, Gayle Rankin’s ‘Sheila The Wolf-Girl’). All of this is pinned against the back-drop of the VHS-loving, spandex-clad, coke-snorting 1980’s. Out of the gate, Season 1 was a joy to behold, bouncing between comedic nostalgia and engaging drama like a veteran tag team duo bouncing between the ropes.

Season 2 of GLOW builds upon this solid foundation and largely improves it. With the leg-work of back-story out of its way, GLOW keeps the neon tights and big hair in the foreground, but leaves room to dig deeper into the characters, stories, relationships, and potent themes – all while remaining pure fun to watch. 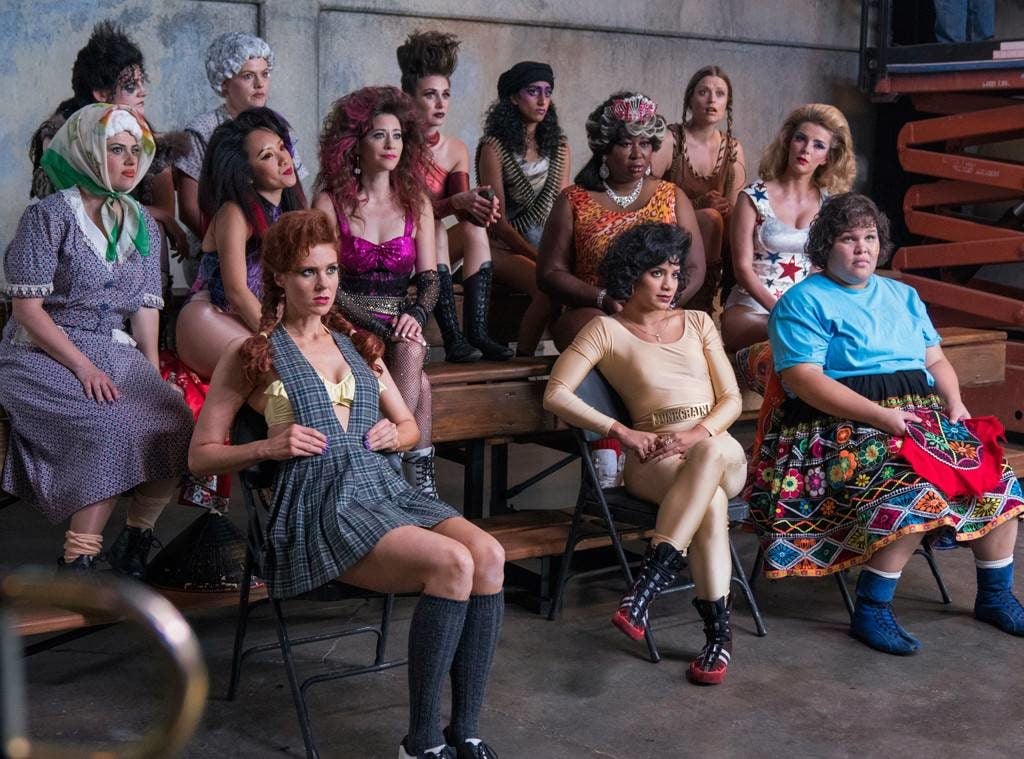 GLOW’s greatest strength is its well-realized characters, and their depth is supported by the show’s ability to blend drama and comedy. Season 2 hits hardest when it leans deep in either direction. The most persistent issue the characters face is the egregious stereotyping that many of the women endure, yet also revel in, as their wrestling alter egos (an idea adapted from the reality of the original real-life GLOW on which the Netflix series is loosely based). “I think in our dream world the debate between ‘is it empowering’ and ‘is it exploitative’ is always going to live at the heart of the show… we hope to never fully leave the question of, ‘is this slightly exploitative?’” said producer Carly Mensch. (Variety, June 2017). While this was implicit in Season 1, we see the conflict writ large for several of GLOW’s fabulous ladies in Season 2 – Sunita Mani as Arthie ‘Beirut the Mad Bomber’ Premkumar and Ellen Wong as Jenny ‘Fortune Cookie’ Cheyand are particularly tough to say without cringing. But none cut deeper than Kia Stevens’s magnificent portrayal of Tammé Dawson, or as she is known in the ring: ‘The Welfare Queen.’ 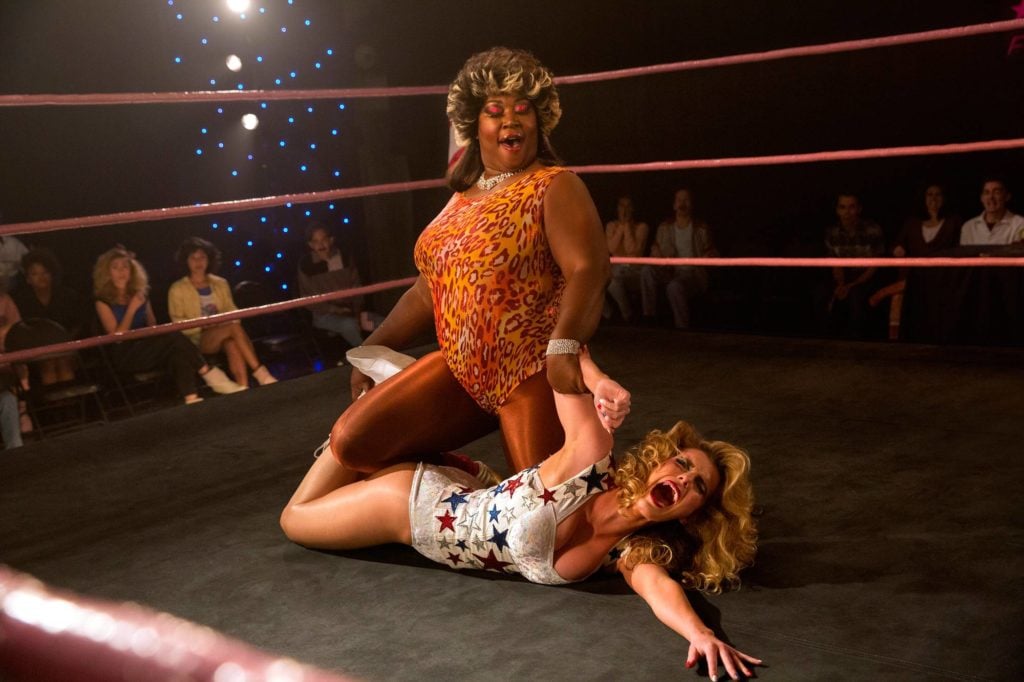 In Season 2, Stevens is given a chance to explore her inherent conflict (one that has a lot in common with the actor’s own progression through female wrestling as The Amazing Kong) in the fourth episode of the season, ‘Mother of All Matches.’  Thus far, Tammé’s been having fun and feeling accomplishment as an entertainer, but that entertainment-value comes at a high cost– her act is transparently racist at its core. When her sharp-witted Ivy League son pays a visit, it’s clear that Tammé has raised a caring and strong-willed young man. But Tammé struggles to let her son know that she’s traded in her job as the audience coordinator at The Family Feud for a pair of neon tights and a painful stereotype. An extra layer of well-placed dramatic irony plays out in the background, as the so-called All-American ‘Liberty Belle’ has been struggling to hold it together as a Mom, and her only ally has been Tammé. The plot boils over when a match featuring ‘Liberty Belle’ and ‘Welfare Queen’ gets too real, leading the audience to chant ‘Get a job!’ as Tammé nearly breaks with her son bearing witness to a public humiliation.

When she is able to re-connect with her son after the match, neither of them moralize or equivocate. “That was…offensive…” he judges, but goes on to marvel at his mother’s physical wrestling prowess, and then takes her out to dinner. Tammé’s been both liberated and humiliated – it isn’t a simple thing. In all of her interactions in the show, what underlies Tammé is strength and understanding, and the result ends up realistic and complex, like life itself. The real audience is made to feel the true discomfort of racism as entertainment, but there is no tightly packaged resolve, only an earnest connection with her son over her harsh and mixed reality. Yet the true wonder comes in GLOW’s ability to get all of this done tightly in one episode, and to leave you feeling uplifted from the tale told without sugar-coating the issue at hand. It’s a delicate balance, and they sell it. 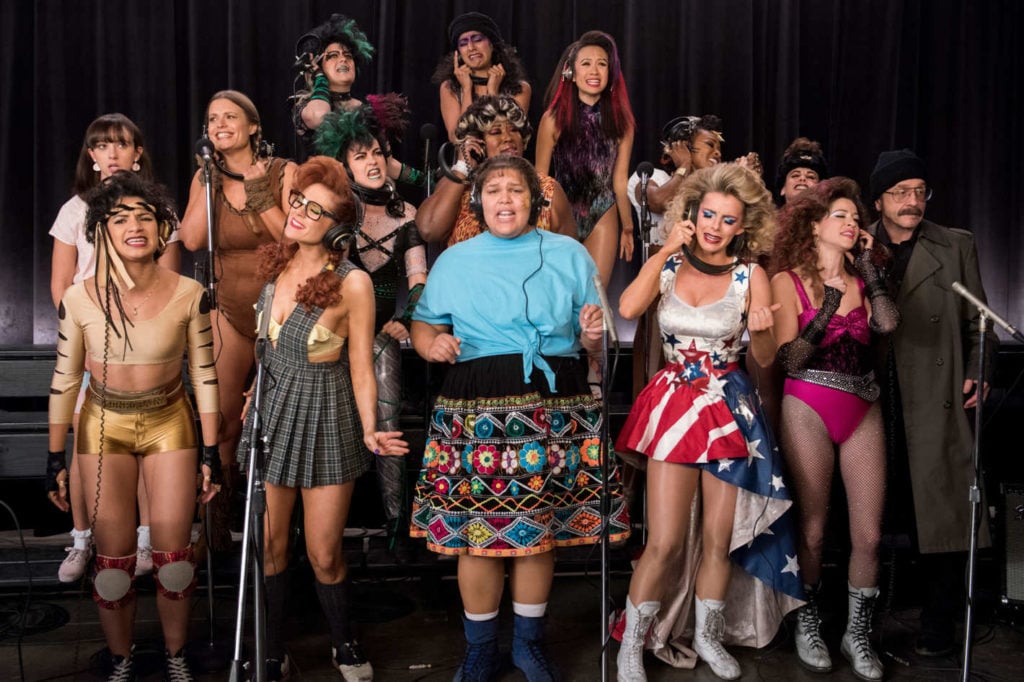 Harsh reality abuts high-flying entertainment throughout the season, but the ninth episode of the run, season-highlight ‘The Good Twin,’ goes all-in on the entertainment side, and showcases the entirety of the talented cast while it’s at it. Embracing the concept of a cable-access show-within-a-show to its fullest extent, ‘The Good Twin’ presents a top-down full ‘episode’ of GLOW as it would appear on their local channel. This high-concept installment includes (but is not limited to): a romance with a living mannequin, multiple low budget music videos, a goat, a robot, an evil twin, and faux low budget production values to gloriously match. It’s silly and over-the-top and it works beautifully. It’s believable that this is the show-within-the-show that these people would make, and it advances their story by reveling in the joy they find in making something together. Underlying the mad-cap fun are several important story resolutions and arcs – among other turns, it is the culmination of Alison Brie’s Ruth getting both creative autonomy and recognition for what her passion has brought to everyone around her. But really, it’s just fun as heck to watch. 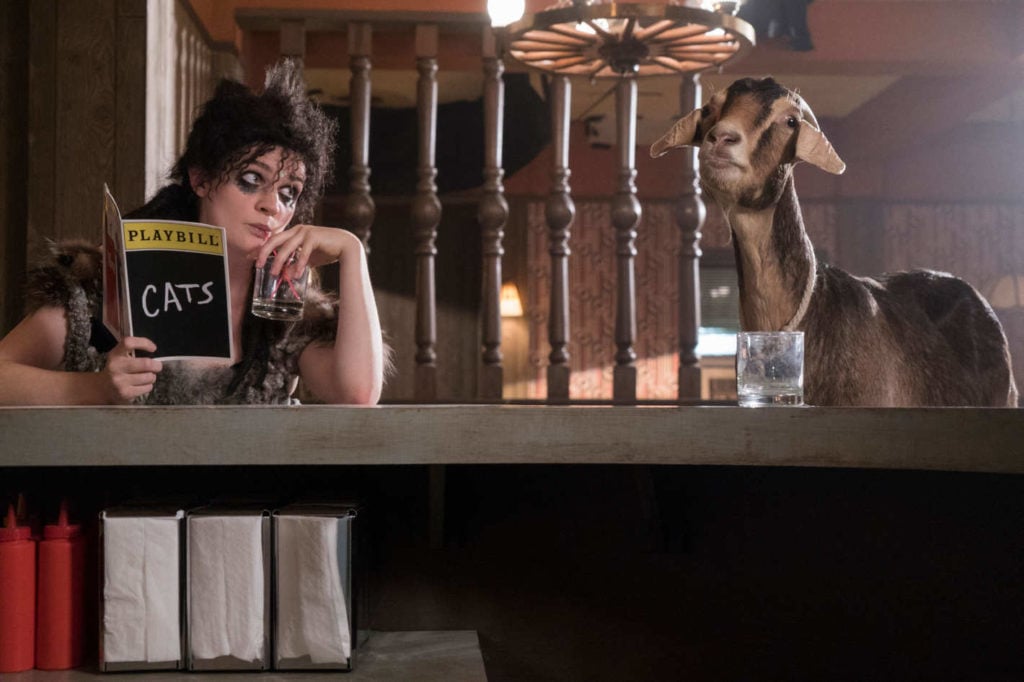 If there’s a complaint to be leveled against GLOW Season 2, it’s simply that we want more of everyone in it. The tightly wound episode count (a modest ten) keeps the plot moving at a peppy pace that facilitates a binge, but each episode stands well on its own. Despite this well-measured approach, you’re left begging the ref for a few more minutes with all of the amazing supporting characters, and perhaps a few less with the mains. It’s a testament to the talent of the robust surrounding cast and the clever writing supporting them that you can’t get enough of each and every character.

It’s no coincidence that the breakout episodes of the season were ‘Mother of All Matches’ and ‘The Good Twin’ – a deep dive into one strong supporting character and broad and fun look at the cast as a whole. To be fair, the series absolutely takes some time to hang more deeply with almost all of the extended cast – in small notes, we learn quite a lot about Machu Pichu’s family, Britanica’s past, and the rest. Notably, the aforementioned ‘secret’ breakout, Gayle Rankin’s masterfully lived-into ‘Sheila the She Wolf,’ gets a wonderful miniature arc in which she must learn to embrace her unexpected cult fame – and her cosplayers – and you’ll be howling right beside them. But more of these kinds of explorations would only serve to strengthen the backbone of the series that is built on well-constructed characters. The main cast and plot are excellent, but perhaps a dash less time with the ‘will they/won’t they’ love triangle-trope would make room for just a little more time with all of the other exceptional talents. But it’s a small complaint in light of such a well-realized season. 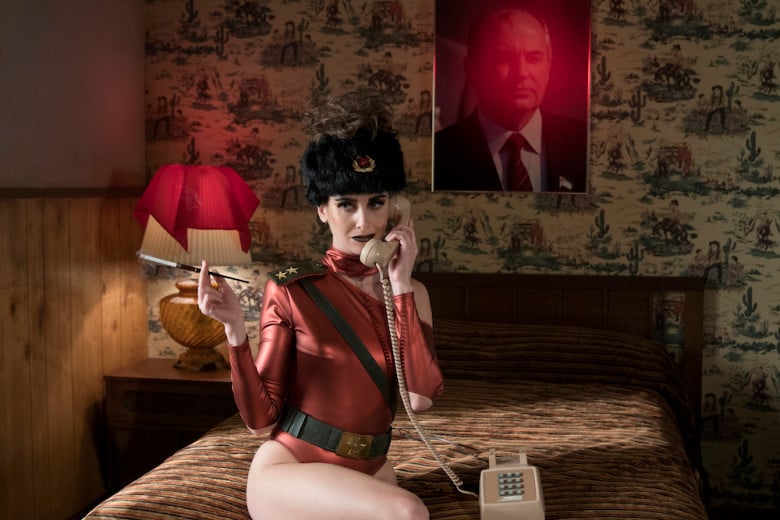 Season 2 Is A Victory

By the time the final bell rings, GLOW Season 2 wins you over. The show jumps in and out of the ring to float serious drama and nostalgic comedy – the line is often more blurry than simply the division between the wrestling personas and their ‘real-life counterparts,’ and it works. GLOW remains consistently believable, engaging, and truly fun.

In examining ‘The Mother of All Matches’ next to ‘The Good Twin,’ the gap between serious issues and off-the-wall zaniness looks enormous, but the creators and cast of GLOW bridge that gap without breaking a sweat. The nuanced humanity in these artfully portrayed characters only leaves us wanting more of them, but next to the cohesive vision for the series and season, the show holds together marvelously. At the end of the match, they’re a rag-tag bunch you’d love to jump into the ring with.

Couched in the warm …ahem… glow of nostalgia and zany shenanigans, GLOW Season 2 serves up a pile driver of delightful television that is as timely and meaningful as it is entertaining.

Better Call Saul Is Content to Take its Time

Marty Allen is an artist, writer, and creative producer who lives in Brooklyn. Marty loves to write about video games, pop culture, and all sorts of things. He's written a pile of books and made a bunch of art and songs, but mostly he just plays Animal Crossing, walks his dog, and makes delicious sandwiches.