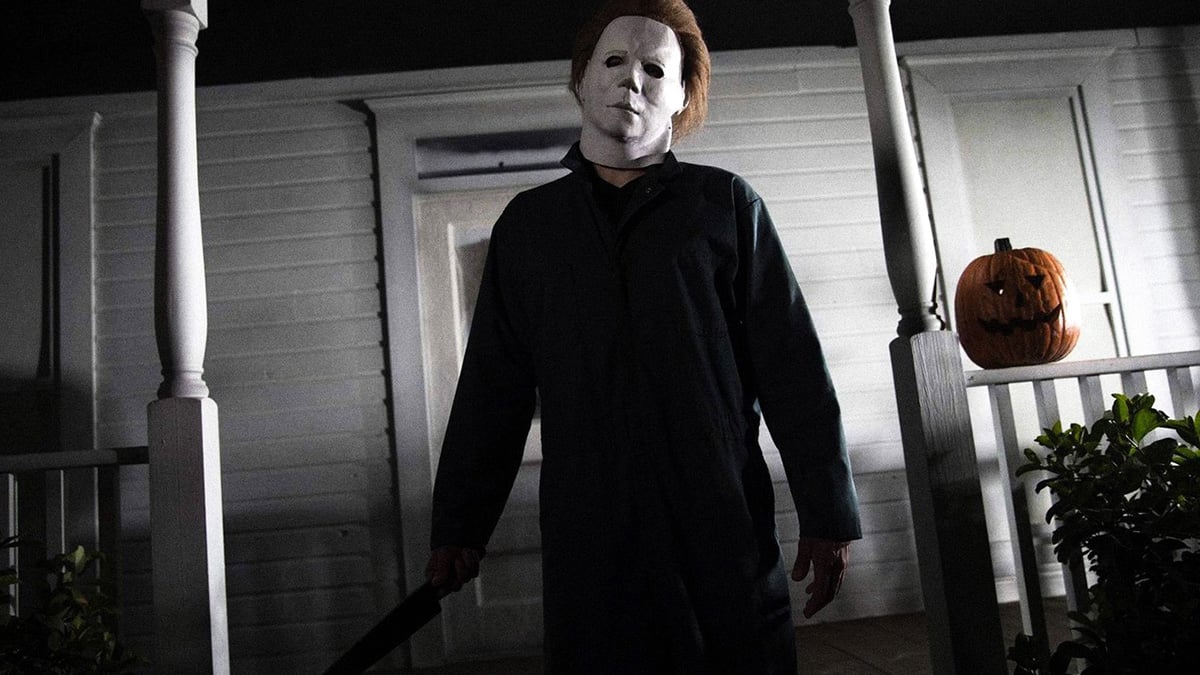 Did you know that Michael Sembello’s 1983 hit song “Maniac” from Flashdance was originally written as the title track to William Lustig’s low budget New York grunge slasher flick, Maniac? A precursor to Henry: Portrait of a Serial Killer, Lustig’s grimy snapshot of early ‘80s Manhattan is an unapologetically twisted study of a pathological murdering maniac. Maniac comes across as a slasher version of Taxi Driver, a film that star Joe Spinell also appeared in. Spinell is committed to his role and does a fabulous job in delivering a series of long and rambling monologues to himself about his childhood abuse. This harrowing, stomach-churning journey into his psyche pissed off many critics upon release, but one cannot deny the emotional impact this film has. Perhaps the most memorable scene features leading horror make-up expert Tom Savini, playing a guy whose head is completely blown off. Sleepaway Camp is just one of the many entries from the classic heyday of slasher films released in the early 80’s and recycles much of the same formula of Friday the 13th. The plot is fairly simple and follows a bunch of teens at a summer camp who are slaughtered one by one in what amounts to a whodunnit complete with Freudian trauma and gender-role confusion. There are about 11 murders in the movie, but writer/director Robert Hiltzik chooses to suggest the worst ones through shadow or by obscuring part of the action. For the gorehounds, there are a few definite gross-out jobs makeup-wise, but overall Sleepaway Camp has significantly less gore than most of the movies featured on this list. That said, it is one of the most entertaining slasher films from the 80’s and boy is it ever a memorable one due to its unexpected twist ending, which burns in your memory long after the credits roll. When a Stranger Calls originally started out as The Sitter, a short film made by director Fred Walton, but because of the massive success of John Carpenter’s Halloween, it was expanded to form the basis of a feature. The slow-burn approach is book-ended by some truly excellent classic horror movie moments – the opening alone serves as the entire basis for Wes Craven’s Scream —and Walton does an incredible job of mounting the tension almost entirely using sound. Everything from the constant phone ringing to the killer’s creepy voice to the powerhouse score keeps viewers at the edge of their seat. Charles Durning gives a more than capable performance – virtually stealing the show when he breaks down, completely nude, in front of his reflection in the washroom mirror. Highly recommended! From genre director Pete Walker (The Flesh, Blood Show, House Of Whipcord, and The Confessional) comes Frightmare, one of my personal favorite British horror films ever made. Apart from border-lining the slasher genre, Frightmaredisplays an overwhelming distrust of psychiatry and related professions and examines the idea of nature vs. nurture. There’s an artistry to Peter Walker’s work — his fluid studied camera movements and intentionally abrupt edits, project the gore and provides a disarming atmosphere. The entire cast delivers superb performances, but this is Sheila Keith’s show. Her Dorothy is the epitome of the passive-aggressive mother, alternating between smart and feeble-minded, attentive and disoriented and so on. But don’t be easily fooled, as she eventually makes it very clear that she is always two steps ahead of everyone else. Frightmare is a marvel, a genuinely shocking film that features a fabulous ending. My Bloody Valentine was made at the height of the slasher/holiday trend and is noteworthy as one of the most distinctly Canadian horror films ever made. Produced by Happy Birthday To Me gurus John Dunning and André Link, and directed by George Mihalka, My Bloody Valentine is one of the best in the slasher genre for several reasons: Mihalka’s direction is first-rate; the score by Paul Zaza is effectively creepy; the small town location and mining mill makes for a refreshingly unique setting; the film features a decent body count (though not much blood); and finally, the killer has bragging rights on wearing the best costume of all slasher villains (the unstoppable miner’s identity is hidden by a gas mask and he has a construction helmet complete with its own headlight). My Bloody Valentine is competently made, well shot, expertly paced and features a great cast along with some creative ways to kill them off one by one. From the director of Squirm and Blue Sunshine, Just Before Dawn doesn’t do anything new in terms of backwoods horror slashers, but fuck is it ever good. Beautifully shot and competently acted, it features great locations, a brooding atmosphere, and great dialogue. It’s also deeply unsettling, and the twist ending is surprisingly effective. Just Before Dawn also carefully plays with gender roles and queer stereotypes. It featured early performances from actors Chris Lemmon (Jack Lemmon’s son) and Gregg Henry (Slither), as well as early work from music composer Brad Fiedel, who wrote and performed the film’s eerie score. Lieberman cites the 1972 film Deliverance as the main influence and calls Just Before Dawn his personal favourite of his works. Originally titled Communion, Alice Sweet Alice, despite its considerable cult following, has slipped into relative obscurity. Released in 1976, it was given glowing reviews by critics and won the top prize at the Chicago International Film Festival. The film was made not long after The Exorcist and it capitalized on that film’s themes of Catholicism and evil children. Alice features some of the more disquieting set pieces in any movie appearing on this list and also features the big-screen debut of Brooke Shields at age 11. The most memorable aspect of Alice comes from the tour-de-force performance given by the killer, one of the absolute best in the pantheon of movie murderers. In both concept and execution, the first Nightmare on Elm Street has a great deal more to offer than most slasher films. Wes Craven intended Nightmare to be an exploration of surreal horror as opposed to just another stalk-and-slash genres movie. Elm Street was New Line’s first genuine mainstream cinematic venture (after Alone In The Dark) and made the company a huge pile of money. The film was shot in 30 days at a cost of roughly $1.8 million, but it made back its figure and then some on opening weekend. Robert Englund based the physicality of Freddy on Klaus Kinski’s performance in Werner Herzog’s Nosferatu: Phantom der Nacht (1979), making Freddy one of the most recognizable modern horror villains. Nightmare was both the feature debut and breakthrough for actor Johnny Depp, but the film acted more as a launch pad for its director, who although turning out two great pictures prior became a household name. Craven masterfully disguises dreams as reality and vice versa, and the idea that injuries sustained in dreams also exist outside helps to further blur the already murky distinction between the two. We never did find out who Billy was. Maybe it’s for the best since they never made any sequels to Bob Clark’s seminal slasher film, a film which predates Carpenter’s Halloween by four years. Whereas Texas Chainsaw Massacre, released the same year, blends backwoods horror with the slasher formula, Black Christmas is widely considered the first proper slasher film and is noted as one of the earliest films to present some of the subgenre’s defining characteristics: a mysterious stalker, a set of adolescent or young-adult victims, a secluded location with little or no adult supervision, point-of-view camera shots representing the “killer’s perspective,” and depictions of violence and murder. Like Carpenter, Clark avoids graphic bloodshed, focusing instead on suggestion and careful mise-en-scene and editing. Clark leads us through a labyrinth of red herrings and skillful handling of such plot devices as obscene phone calls from within the house. More importantly, unlike many of the slashers that followed, Black Christmas cannot be accused of misogyny; the violence against the female protagonists isn’t the picture’s raison d’etre. If there was ever a character from a slasher film to be chosen for a thesis on feminist work, it would have to be the film’s final girl, Jessica.

This seminal horror flick actually gets better with age and holds up as an effective thriller that stands head and shoulders above the hundreds of imitators to come. Halloween was produced on a budget of $325,000 and grossed over $100 million worldwide, making it one of the most profitable independent films ever made, and thus it had one hell of an influence on the entire film industry. You have to admire how Carpenter avoids explicit onscreen violence, yet amplifies the suspense almost entirely through visual means. Carpenter’s widescreen frame, expert hand-held camerawork, and terrifying foreground and background compositions, along with the simple but moody piano melodies, is what makes Halloween a resounding success. As a horror film and as a historical milestone that single-handedly shaped the future of an entire genre — not to mention introduced the world to Michael Myers — Halloween is nothing short of brilliant.