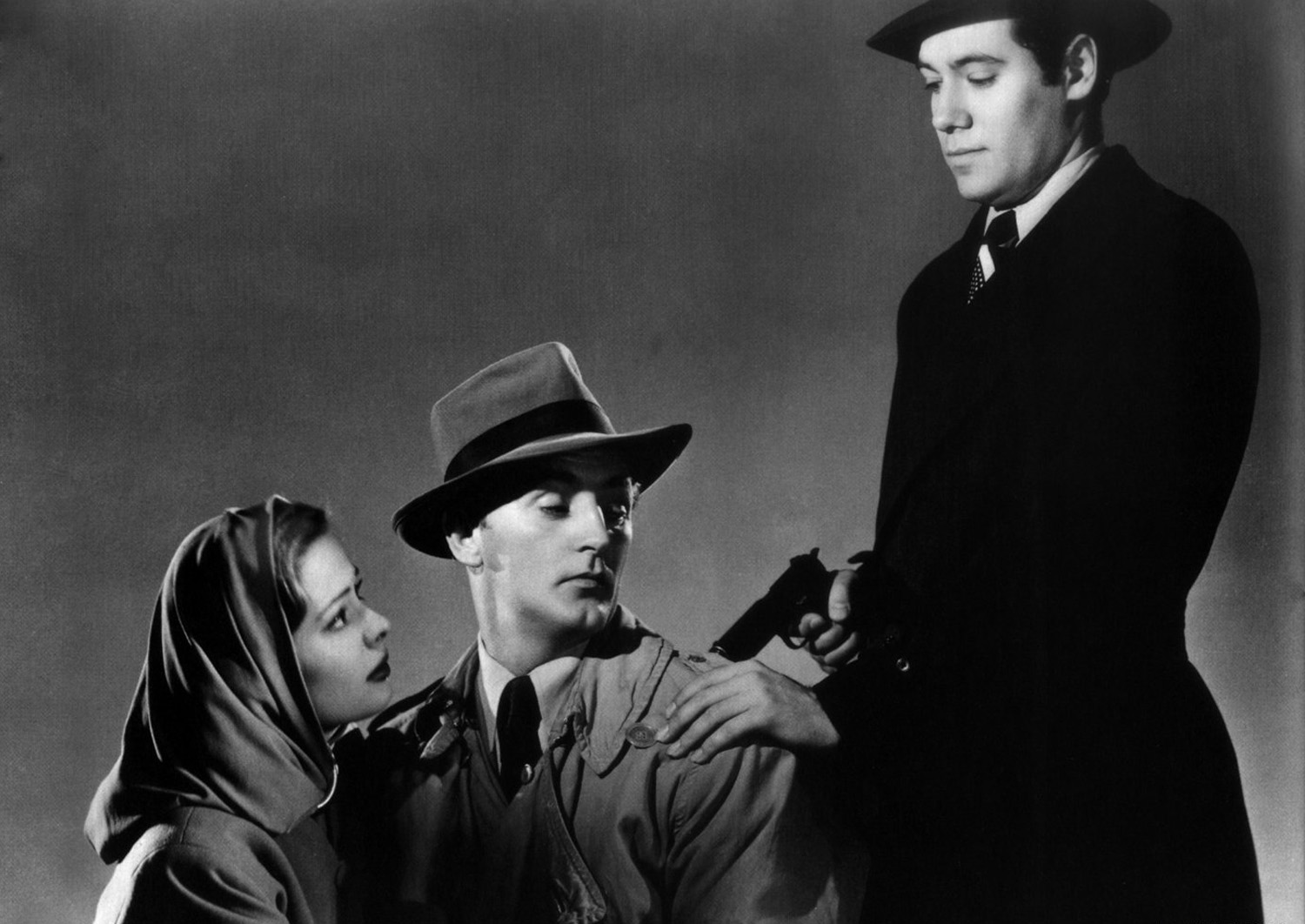 Friday Film Noir Out of the Past

Sometimes, there is no eluding one’s past, regardless of how hard one tries. The reasons are numerous. Perhaps the emotional and psychological weight of an event in one’s life are too great to shake off. In other instances, the shackles exist because an individual is condemned to spend years actively correcting previous errors in judgment in the hopes of earning long-sought-after redemption. There exists another set of circumstances, the most deceptively simple of the lot, that being when a person merely walks away from an embarrassing, shameful, and deeply regrettable episode, but deliberately creating separation from their history is no guarantee that the old ghosts will acquiesce to letting them be. When one least expects it, a new challenge presents itself from… out of the past.

Jeff Baily (Robert Mitchum) has settled in nicely as a mechanic and gas pumper for a garage in a typical tiny-town-USA. His love life is in equally solid shape, quite literally, with his girlfriend Ann Miller (the lovely Virginia Huston) also madly in love and contemplating marriage. Nonetheless, there is something amiss about Jeff, something unmistakably mysterious. He is evasive when questioned about his past and oddly cautious in his approach to people. As Ann’s mother yells out from the house when she leaves to spend an evening with her beau, what sort of man is he if he will not even come to the door? What does Jeff want to hide so badly? The answers are forced out of Jeff the day an old acquaintance of sorts, Joe (Paul Valentine), arrives in town. Jeff is not especially thrilled to catch up with Joe, least of all when the latter reveals that his employer, Whit Sterling (Kirk Douglas) is keen on seeing him once again too. It was not so long ago that Whit hired Jeff during his days as a private eye career to track down Kathie (Jane Greer), Whit’s main squeeze at the time who tried to run off with the money. Suddenly, there is a sinking feeling that old wounds are about to be opened once again.

Jacques Tourneur’s Out of the Past is arguably one of the more unique noir entries, with some of its qualities being products of its time, whereas other aspects ensure, conversely, its timelessness. The film straddles the line between these two identities, balancing each in near-perfect synchronicity, always a strong indication that a true craftsman of a director is at the helm. Ironically, the name Jacques Tourneur is not the first which springs to mind when recalling the great directors of the era like John Huston, Billy Wilder, Nicolas Ray, or Stanley Kubrick, all of whom directed some of the absolute finest noirs. That will never alter the fact that Tourneur swung for the fences with Out of the Past, his efforts paying off handsome dividends. But what of these two complementary identities that make Out of the Past the memorable experience that it is?

The first, more immediately noticeable trait is the remarkably snappy dialogue. In fairness, films of this era often prided themselves on the witty, playful nature of the spoken word. Nowhere is this more apparent than in this very film, where nearly every character, in nearly every scene for that matter, has an unforgettable retort to another person’s query or comment. If there are fans of Rian Johnson’s Brick who would like to discover a prime example of what sort of film might have influenced the 2005 neo-noir dialogue, look no further. The stylization of how people respond often extends to what was uttered just before. It feels as if most of the film’s dialogue consists of witty set-ups for even wittier comebacks. While it makes for a great listen (and a treasure trove of snappy lines to show off in real life!), it begs to question whether it is too much for a single movie. In a sense, it detracts from some of the believability that might otherwise be felt about the personalities viewers get to know. Not everyone in the same story can possibly talk like this, it lacks credibility. Naturally, one needs to suspend their disbelief to a degree in order to accept the movie’s universe. Potential criticisms aside, there are not one but two distinct, critically important layers to the banter exchanged throughout. The first consists of the very effort required to conjure up lines that snap like a whip for the entire running length, which is not a simple feat in itself. The second is even more impressive and has to do with determining which intelligent lines are best suited for specific characters. Certain lines make more sense coming out of Jeff’s mouth, or Kathie’s or Whit’s. It is in this respect that screenwriting truly hits the mark. Paying close attention to the dialogue on a second or third viewing begins to reveal its exactitude and by extension helps inform the viewer about who these people are.

The heightened sense of reality attributed to the dialogue is only one of the picture’s allure. Simply put, Out of the Past is a very stylish version of a story many can relate to, thus making it timeless. Obviously, the plot’s familiarity has less to do with the excitement of a private eye going rogue against a client, falling in love with a beautiful dame they do not even know they can fully trust, and more to do with the idea of the past’s inescapable nature. Anyone anywhere can relate to a story of one person attempting to contend with the consequences of their previous actions. It does not even have to be a crime or any other particularly dramatic act. Even the smallest, seemingly forgettable actions carry the potential of echoing weeks, months, and years afterward. Love is mankind’s greatest asset but oftentimes it’s most mishandled and misunderstood, with the number of errors committed for love’s sake, or what a person believes is love at the time, innumerable.

Lest it be overlooked, Tourneur’s film gets playful with the narrative’s chronology. It opens in the present, only to shift to Jeff’s back-story when he narrates it to his girlfriend on the drive up to Whit’s estate, finally catching up with the present yet again when they arrive. This common tactic incurs much risk in that the story’s flow can easily be disrupted for superficial or, in the worst-case scenario, needless back-story. As amusing as Kill Bill vol. 2 is, that is an example where the disruption in the order of the narrative is nearly a hindrance. With, Out of the Past, the strategy magically creates the opposite effect; it enhances the narrative by contextualizing what was and what is to come. Just as the audience is finally privy to Jeff’s recent history, so is Ann, who had been aching to know the truth as well. It also adds terrific tension to the subsequent scene when Jeff reunites with Whit. Knowing how badly their previous arrangement went sour, what might the dastardly antagonist have up his sleeve this time around? That is not even the biggest surprise awaiting Jeff for breakfast, for out of the blue Kathie suddenly makes her unexpected entrance, complicating matters even further. The film is very much split into two halves when viewed in that light, with the entire first half functioning as set-up, which sounds like a heavy amount of running time just to set the pawns into place and, by almost any standards, it is, but it is also so well executed and so deliciously effective in raising the stakes for the second half that the viewer does not even care to notice.

So much has been written about stars Robert Mitchum and Jane Greer in this film that there truthfully remains very little analysis that would add to the conversation. Each is undeniably iconic in their respective roles, with Mitchum exuding all the qualities of world-weariness, sarcasm, and uncertainty about what the future has in store. There is something deeply magnetic about his performance in which he perfectly communicates the sense that his character is well aware that the odds are stacked too highly against him yet goes through with his new assignment anyways, as if languidly accepting his fate. It is a bittersweet way to play the part and fits like a glove within the noir canon. Greer brilliantly plays Kathie, a woman of many faces, whose allegiance, viewers learn, should never be trusted. Because her character’s personality continuously morphs depending on the circumstances, Greer not only equals Mitchum but surpasses him. A viewer can just as easily fall in love with her or loathe her treacherous guts, a balancing act, not just any actress can pull off. Kirk Douglas co-stars in only his second silver screen role as the calm and collected yet sinister Whit Sterling. He provides the role with the slimy gloss most successful film gangsters are known for with a subtle undercurrent of menace. Paul Valentine has an amusing role as Whit’s enforcer, a man who realizes his decreasing ability to threaten and that he may not be a match for Jeff if worse comes to worst.

A countless number of articles have been written about Out of the Past, many from far more notable and experienced critics. It possesses so many of the vintage qualities one immediately associates with noir. In the book Film Noir (Alain Silver and James Ursini, published by Taschen America Llc, 2012) the chapter elaborating on the genre’s tropes uses Tourneur’s movie as an example on numerous occasions. It is the standard against which so many other films are measured, which is reason enough to watch over and over again. If one has yet to discover it, they owe it to themselves to make the movie a part of their own past.