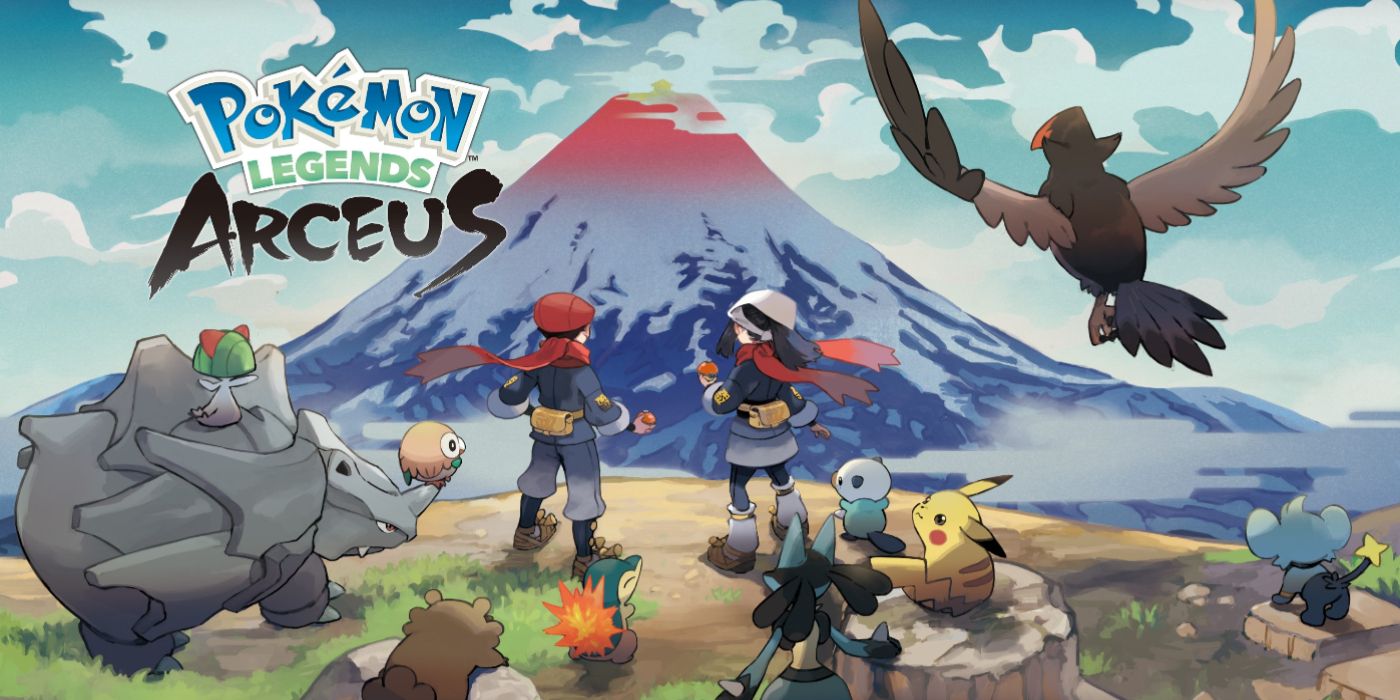 In an unprecedented move, The Pokémon Company released a cryptic found footage style trailer for the upcoming Pokémon Legends: Arceus. Having never gotten a trailer in this style for any Pokémon games previously, Legends: Arceus continues to demonstrate Game Freak’s commitment to breaking the familiar Pokémon mold. The new trailer offers significant information to speculate on and hints at things to come from one of the biggest games of 2022. In a tweet earlier this morning, The Pokémon Company put out a call to all Pokémon trainers notifying them of the discovery of mysterious footage in the Canalave Library. The end of said tweet reads “Please examine this footage and report back with your findings.” So, since we have all so kindly been invited, let’s do just that.

The footage depicts an unnamed trainer finding a video camera and using it to document an environment and encounter with a mysterious Pokémon. At the outset of the trailer, the trainer clearly states that the time of day is 7:07 pm. This specific detail doesn’t necessarily mean the mystery Pokémon will only be able to be found around 7 pm, but the specificity of this line can’t be ignored.

The trainer then goes on to state that he is hoping to document something using “this strange device.” This line indicates that the trainer is unfamiliar with the camera being used to record the incident. According to the official Legends: Arceus website, the game will serve as a prequel to the rest of the series taking place “in an age long ago when it was rare for people and Pokémon to live in close harmony.” This explicit confirmation of timeframe combined with the trainer’s unfamiliarity with the recording device indicates one of a few likely possibilities:

Okay, while the third possibility is extremely unlikely, the trainer’s unfamiliarity with the device is a detail that must be accounted for.

After the comment about the device on which the trailer is recorded, the trainer mentions that the entire environment is blanketed in snow.  Considering the fact that the Hisui region in which Legends: Arceus takes place is already confirmed to be the same region as what is now known as Sinnoh, this detail could point to where the encounter unfolds. Thanks to our having already been to the Sinnoh region, the snow blanketing the ground would point to this encounter occurring near or around route 216, route 217, or Veilstone City.

As the trailer progresses the trainer encounters several of the same Pokémon. Upon seeing these Pokémon, the trainer says aloud “Those are…Those are wild…runt!” followed by “You see, S…unt…” and “Whoa…even though it’s so cold here!” The dialogue is broken up by distortion and very little of it is comprehensible. A quick search confirms that there are no existing Pokémon whose name feature’s the letters “unt” sequentially. This could simply be a new name for an existing Pokémon similar to how the Sinnoh region was previously known as Hisui, or it could be an entirely new Pokémon. Regardless of which ends up being true, based on the trainer’s reaction, it’s safe to assume that these Pokémon are more often found in warmer climates.

After the slow crescendo, the trailer reaches its climax as the trainer encounters what is presumably the legendary Pokémon of the game. When first encountered the trainer mistakes the Pokémon for a Growlithe or Vulpix which would imply an orange or red coloring. The trainer goes on to describe the Pokémon as having a swaying tail, the tip of which is red. After the Pokémon turns toward the trainer, he exclaims that the Pokémon is “adorable” with fluffy white fur on top of its head and around its neck. The trainer makes note of the Pokémon’s eyes being round and yellow at which point the audio leads the audience to believe that the trainer has been attacked. This game being titled Legends: Arceus makes it safe to assume that the god Pokémon Arceus will play a significant role in the game’s main story. That assumption combined with the description of the Pokémon in the new trailer, its aggressive nature, and other Pokémon seen earlier in the trailer being outside their natural habitat begs the larger question: is this Pokémon the antithesis to Arceus? Where Arceus is the god figure, is this the Pokémon world’s Satan?

Unfortunately, we will all be waiting until the game is released in January to find out the truth of the matter, but until then consider my interest piqued. We can only speculate about this new trailer, but if The Pokémon Company wants to keep releasing these found footage type trailers with a radical tone departure from what we typically expect from the franchise, this may be the most excited I’ve been for a new Pokémon game since Pokémon X and Y.