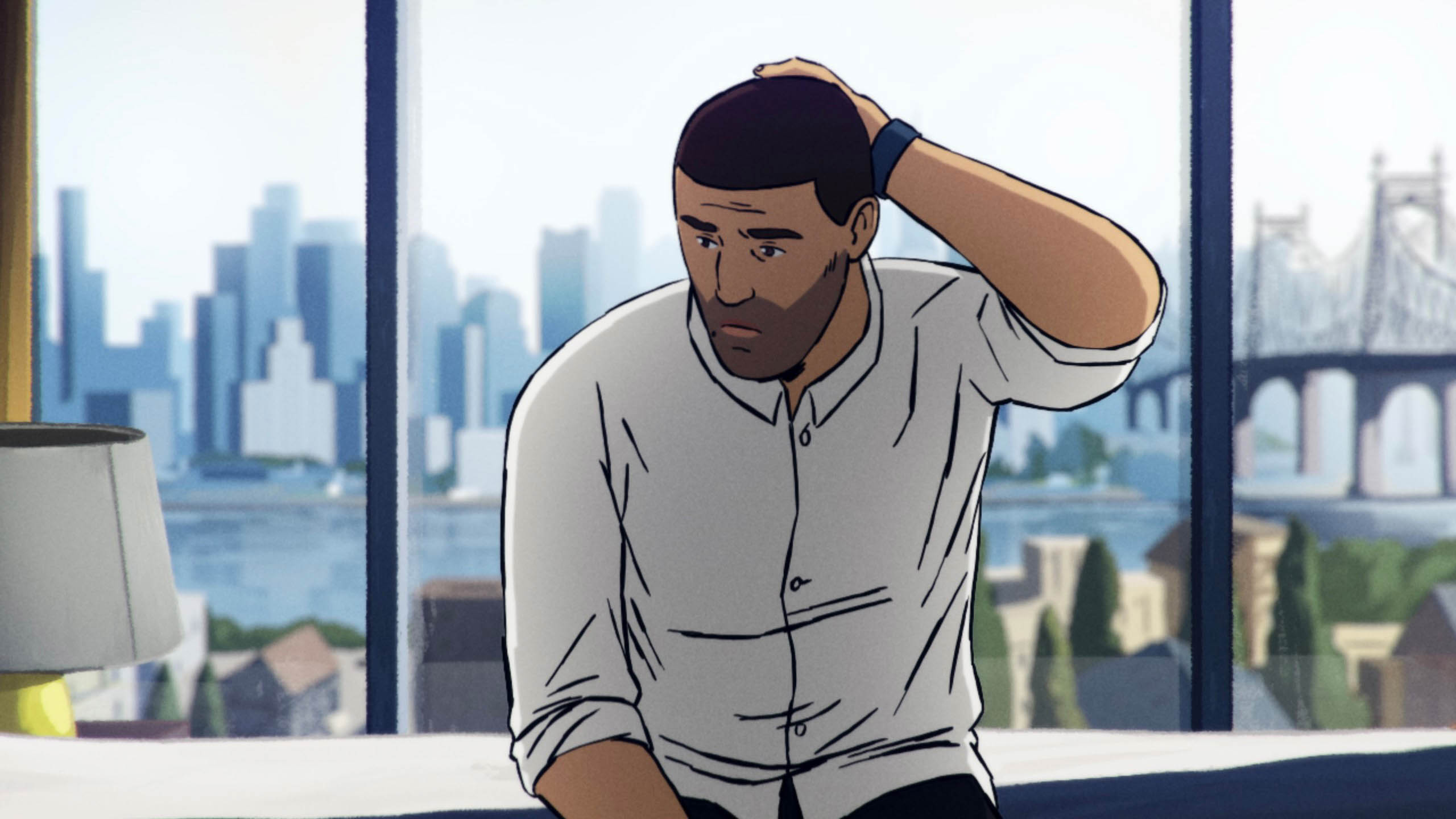 Jonas Poher Rasmussen ‘s Flee tells the true story of a man, Amin, on the verge of marriage which compels him to reveal his hidden past for the first time.

Portraying the refugee experience through wonderful animation made necessary to maintain anonymity, Flee is a powerful glance at one Afghan refugee’s story as he attempts to find a place to call home. Along the journey, director Jonas Poher Rasmussen taps into the heart of its subject’s tale and uncovers the secrets sometimes kept in order to stay safe. Heartbreaking moments aplenty, Flee tells an intimate account of one experience that taps into the horrifying reality that sometimes fear becomes embedded in every decision you make.

Evading the boundaries of documentary storytelling, Rasmussen roots himself into the film as he interviews Amin – a refugee from Afghanistan now living in Copenhagen, Denmark. Coincidentally, the two have known each other for over 25 years, and Rasmussen finally got Amin to open up about his life story. To ensure his identity is kept under wraps, Amin’s story is told through animation with the occasional moments of archive footage spliced throughout. Amin recounts his story from when he was a child in Afghanistan and the eventual pressures that led him and his family to flee after their father’s disappearance. As their home of Kubal threatens to become part of the battleground for a Civil War, the family heads to Moscow and eventually find themselves struggling to make a life for themselves with the potential of being sent back to Afghanistan looming over them.

While centered around Amin’s life, it’s not difficult to find the universality in his experience with other refugees. While the journey may be different, the emotional toll mirrors many other refugees he encounters along the way. The power given to human traffickers and the release of control over your own life ends up being a constant throughout Flee as the only means of potentially escaping dire circumstances. Hearing Amin talk of the ways in which he and other refugees were treated, including other family members, is devastating.

There is also the concept of hiding yourself to stay safe which Amin experiences throughout his whole life. From the fact that he realizes he can’t tell his family that he is gay because of Afghanistan’s views on homosexuality to the early reveal that his family is not dead (which he has kept a secret in fear of being deported), Amin’s life is mired in secrecy from those he loves most. As we get glimpses into his current life, Amin is shown as guarded – having worn a mask for so long that it’s not even really a cover-up at this point. Instead, it’s a lie that he keeps as a shield out of fear.

Sprinkled throughout Flee are moments of levity that help break up the depressing events recounted by Amin. From him laughing about fantasies of Jean-Claude Van Damme to the ways in which Rasmussen and Amin’s own rapport continues outside of the more formal interview process. Many of the heartwarming beats are in Amin and Kasper’s relationship as their relationship feels established and known despite walking into a mere slice of their life. As Amin wrestles with opening up to Kasper, the two clearly share a bond that he clings to for support. That support system is in many ways the defining element of how Amin finally came to telling his life story here.

Rasmussen does a fantastic job delivering Amin’s story without losing the scope of the grander picture: that this isn’t just Amin’s experience. In his feature film debut, Searching For Bill, Rasmussen found someone subject to a lesser quality of living and told a story about his quest for answers in a sea of people suffering in many similar ways. His knack for taking one person’s life and extrapolating it to find the many others in similar circumstances is what makes Flee an impressive feat. Amin’s story is filled with ups and downs, but it also showcases the need to cling to hope even when all seems hopeless.

Sundance 2021: In The Same Breath Exposes China’s Handling of COVID-19

‘Kajillionaire’ Finds the Sweet Side of Scamming